In recent years, "hooping" has made a comeback as a form of fun fitness, rather than just fun. 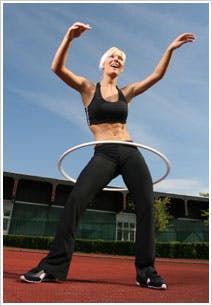 Hula Hoop Fitness As a fad, Hula Hooping has come full circle, to say the least. By the time Wham-O Inc. sold its one millionth proprietary Hula Hoop in the late 1950s, the craze had lost most of its momentum and sales remained in a downward spiral for decades. But in recent years, "hooping" has made a comeback - this time as a form of fun fitness, rather than just fun.

Manufacturers have responded to the trend by offering hoops of various circumferences and weights for users of different sizes and abilities, allowing even beginners to keep the hoop spinning above the hips within a short amount of practice time. Proponents of the exercise - which is most often done in group settings - say the circular motions promote good posture while working on muscular regions including the glutes and the abdomen to stabilize the body's core. The more advanced the hooper, the more opportunities also exist for cardio training.

"The trick about hooping is you are so focused on how you are handling the hoop, you don't think about how many calories you are burning," Lisa Donner, an instructor at HealthQuest, a hospital-owned fitness center recently told Johnston County, N.C.'s The Herald. "As many calories as you would burn running the pace of an eight-minute mile is how many you would burn in my classes, which are 30 minutes."

A high-profile hooping-related fundraiser led by singer Beyonce, as well as a People magazine interview with Barack Obama in which he described his wife Michelle as the best hooper he knows, have only served to increase hooping's popularity in recent months. However, don't expect the West Wing's workout room to be converted into a group hooping studio. "That is one thing you will never see - me Hula-Hooping," the President-Elect told People. "I think that's clear."