Fitness Facilities Must Reposition Themselves for Financial Success

Fitness facilities that have withstood the worst of the economic crisis now must be repositioned for future success. 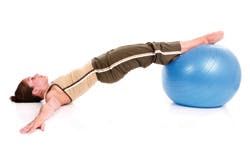 Twelve to 13 is widely accepted throughout the fitness industry as the percentage range of people in the United States who have a membership to a fitness facility, whether for-profit or nonprofit. "That number hasn't changed significantly over the past 10 or 12 years," says Graham Melstrand, vice president of operations for the nonprofit American Council on Exercise, which serves the industry through education and certification programs.

That's good news and bad. First, the bad: Taking the 10- to 12-year view, the percentage is discouraging, suggesting that nearly nine out of 10 people have yet to be sold on the value proposition of joining a fitness facility. "We've been a little slow to respond to consumers' needs in general in terms of answering their core questions: 'Will I belong? Will I fit in? Will I like it? Is it right for me?' " says Melstrand. "I don't think we've taken away those objections."

Now, the good: Given the notion that these deficiencies in both marketing and operations have been compounded by the recent economic uncertainty that has touched virtually every industry worldwide, the 12 to 13 percent range is striking in its consistency - a sign of relative stability in the midst of unprecedented turbulence. Granted, participation doesn't necessarily translate into profitability, as many clubs have taken such drastic measures as reducing membership fees to keep facilities humming. But recent studies have reinforced the idea that the fitness industry is, all things considered, poised to emerge from the economic crisis in decent shape, although Melstrand and others remind facility operators that staying in shape requires some sweat.

"When things are very good, as they had been for the industry as a whole for years, your attention to detail probably isn't as good as it needs to be," says Melstrand, adding that fitness facility operators should be comprehensively rethinking their facilities - from the physical plant and equipment to staffing models and programs. "A lot of businesses are continuing to go down the same path they've been down. They're just waiting for things to change back to the way they were before."

Which, of course, won't happen. The dramatic economic decline that peaked in the early part of this year has permanently altered the fitness landscape. The housing market remains in flux, fitness facilities have closed and consumers - many of whom already view spending on fitness as discretionary - are more shrewd than they've been in decades. But for the survivors, those facilities that have managed to maintain an economic foothold and which are now preparing for what are historically the busiest months of the year, those negatives can be turned around: changes in housing patterns and club closings may result in opportunities in a local marketplace, and those facilities that can meet consumers' demands both financially and from a service perspective can forge new loyalties.

Indeed, the more proactive clubs these days are opening new revenue streams by actually expanding their menu of programs. Research released in July by the IDEA Health & Fitness Association suggests that fitness program directors and facility managers are diversifying program offerings while simultaneously maintaining a positive outlook related to future growth of those programs. "It's apparent that fitness program directors and managers have found interesting ways to respond to the shifting desires and needs of fitness consumers," IDEA executive director Kathie Davis stated in a press release. "This may mean finding new ways to use existing fitness equipment or trying new programming for personal training, group exercise and mind-body activities. The ingenuity of fitness facility leaders and staff has kept customers engaged and coming through the doors of their facilities even through these dark economic days."

The study also suggests that personal training is becoming less personal (meaning clients may share a trainer in a given session), allowing more users to participate. "This reflects a growing practice of providing more cost-effective training options for clients and facilities alike," IDEA summarized in its release. "Budget-strapped clients don't have to give up training altogether, and personal training departments can generate more revenue during the same time slot." Says IDEA Publications editor in chief Sandy Todd Webster, "Consumers no longer view PFT services as an untouchable luxury item for the rich and famous only. As it has become more mainstream over the years, competition in the marketplace has made it more affordable."

Whether talking about shared personal training sessions or more traditional small group classes, most experts agree with what the IDEA study suggests: specialized small group programs are either maintaining or growing in popularity, and club and rec center patrons are eager for new offerings. The problem for facility managers is that such classes (think dance-based fitness or boot camps) require some level of specialized instruction, and as Melstrand notes, "Staffs are probably smaller than they ever have been." So how can you reconcile adding more specialized programs with reductions in staffing? According to Melstrand, if you're operating under traditional staffing models in this economy, you can't. 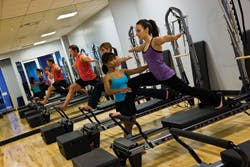 Clubs and rec centers that have been forced to cut expenses have often started with their professional development budgets, which, according to Melstrand, is mistake number one. "In the fitness industry, what happens is that when the individual staff member pays for education and training, they get it in an area that they are personally and professionally interested in, not necessarily in the area that would benefit the club and its membership," he says. The result is that clubs end up with personal trainers and group exercise instructors, paid by the hour, who are "entrepreneurs leveraging their business rather than focusing on the overall health of the organization," says Melstrand, adding that club and rec center managers should "take a more active role in identifying the strengths and weaknesses of their staff members and train them accordingly."

The thinning of fitness center staffs everywhere also challenges facilities' frontline customer service delivery. And when consumers are weighing the value of their membership against, say, the loss of their job, Melstrand contends that the importance of customer service is multiplied exponentially. "The member experience - their engagement with the club and its programs and services - is going to determine on an individual basis what that value proposition is," says Melstrand. "Don't simply say, 'I'll let the televisions and and the equipment distract customers from what they're missing. We all know what a great customer service experience is when we see it in a high-end hotel, and we should be looking to emulate those best practices in our industry."

Not that amenities aren't important; clubs and rec centers will also be judged by potential patrons based on how well their facilities are outfitted compared to their competitors'. Mike May, director of communications for the Sporting Goods Manufacturers Association, again takes the optimist's view, suggesting that these unprecedented (in the fitness industry, at least) economic conditions have added a new dynamic to the marketplace, as buyers of fitness equipment are better positioned to negotiate than ever before. "These are uncharted waters; there's no guidebook on how to survive a crisis like this," says May. "The manufacturers are very willing to work with their customers and price items in a way to make them affordable so they can do the deal. It's amazing what you can get in life if you just ask for it; it just might not be offered right at the start."

Though some major fitness equipment manufacturers reported dramatic sales reductions in the first half of this year, there are some trends that suggest the market slump is indeed temporary. "Everybody's in trouble, whether you're a used-car operation, a grocery store or a fitness club," says May. "The good news is that fitness still has the biggest area of participation among all the activities we keep track of. People are not abandoning what has been their customary athletic outlet."

IDEA's 2009 study also examines facility operators' perceptions of fitness equipment usage and growth potential, and the results reinforce the widely held belief that the trend is toward more portable, versatile pieces of equipment (balance equipment, suspension training apparatuses, foam rollers, small balls and Pilates equipment were identified as the most likely for immediate growth). "I definitely see a trend toward the more portable equipment - talking about bands, speed ladders, kettle bells. Those are the types of things people are developing an interest in now," says Melstrand. "You can get a lot of bang for your buck."

An SGMA study conducted in early 2009 showed participation increases over the previous year in numerous program areas including high- and low-impact aerobics, step-based aerobics, cardio kickboxing, elliptical training, stair climbing, free-weight training and three categories of stationary cycling. Though the numbers reflect feedback from users of fitness equipment both at home and in commercial and nonprofit settings, the programs are among many in the fitness segment that have continued to show significant growth since 2000 (11 of the top 15 are related to personal fitness).

May, for one, sees the economic troubles that many fitness facilities have been experiencing as closely tied to the housing market, with foreclosures leading to relocations and abandoned or non-renewed memberships. But with recent signs of overall economic recovery and a stabilizing housing market, May suggests those lost patrons may be ready to reconsider reviving their fitness regimens. "There is still room for growth," he says. "There are plenty of Americans who should be utilizing the machines and the free weights and all the programs that you're going to find in a club."

Those are the people to reach now in order to position a club for future success, says Melstrand. "People still require a social outlet, even when they no longer have the discretionary income to spend in more traditional ways - going out on the town, traveling," he says. "Fitness facilities provide for some of that social interaction, and they do it in a way that's very cost-effective and healthful."

IDEA's Webster says she sees signs of health in the industry through her very own group exercise participation. "If I don't get to certain classes 15 minutes before they start, I'm locked out," she says. "People still want to look and feel good physically. It may be one of the few things in their lives they can assert control over these days."

Facility operators should likewise assert control over their own condition, even if they've already demonstrated the ability to withstand the economy's toughest blows. "One of the challenges with facilities is that we as an industry have always looked backward at what the largest competitor in the marketplace has done, or at what we have done historically," says Melstrand. "But it is the membership you get now and in the future that is going to drive your success."