A growing number of academics confront the perceived exploitation of African-American male student-athletes. 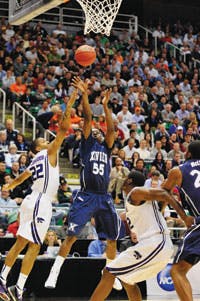 MONEY BALL Critics say the NCAA banks 90 percent of its revenue predominantly on the backs of black males during the Division I men's basketball tournament.

The past decade-plus in University of Tennessee athletics history is as checkered as the end zones in Neyland Stadium. Athletic department successes have been undermined by academic fraud allegations involving the football team, investigations into the recruiting practices of one-and-done football coach Lane Kiffin, and suspensions for basketball players arrested on drug and weapons charges.

Into this atmosphere stepped Fritz Polite. An assistant professor in the UT Department of Exercise, Sport and Leisure Studies, Polite was recruited to Knoxville four years ago to implement ILEAD - the Institute for Leadership, Ethics and Diversity. That charge, combined with his extensive sports background (he played and coached football professionally and worked with the New York Giants on profiling potential draft picks), has put Polite on a new extracurricular course - mentoring African-American male student-athletes. "They need to look at someone outside of football and basketball as a mentor," Polite says. "They need to look at engineers and lawyers and professors - the types of people who are right here on campus."

Polite has so far assembled a team of 10 interested faculty members, and he has sought the input, if not outright approval, of athletic department officials. "I'm going to do this with or without them, because as a faculty member I have the right to engage any student on this campus at any time," he says, having begun mentoring athletes last fall. "And I'm hoping that the athletic department will be open and willing to work with us to try to benefit these students."

Historically, the benefit in the relationship between mostly white colleges and universities and their black student-athletes has been one-sided to the point of exploitation, according to Billy Hawkins, associate professor of kinesiology at the University of Georgia and author of The New Plantation: Black Athletes, College Sports, and Predominantly White NCAA Institutions, published earlier this year by Palgrave Macmillan. "If you look at the relationship initiated by a slave owner, it's purely economic. When we look at an institution's relationship with black student-athletes, and more specifically black male athletes in the sports of football and basketball, it too is purely economic," Hawkins says. "They are generally selected or migrate from communities that are socially and culturally different, and placed into this environment that is somewhat of a culture shock to them. No political power, whatsoever, when you talk about making decisions - even choosing a major."

That is not to say that non-black student-athletes escape exploitation, Hawkins acknowledges, but blacks are proportionally more likely to gain entrance to college based on athletic prowess even if they're ill-prepared for the academic experience. At the same time, those athletes are relied on in greater numbers than their non-black contemporaries to produce a profitable product. "The NCAA generates 90 percent of its revenue from March Madness. More than 60 percent of the athletes who compete in the tournament are black," Hawkins says. "We hear PSAs about how more than 400,000 athletes are going pro in something besides sports. Well, less than one percent of that 400,000 is generating more than 90 percent of the NCAA's revenue, which I think is alarming."

When U.S. Secretary of Education Arne Duncan recommended in March that men's basketball teams with low graduation rates be banned from post-season play, the NCAA responded with a statement citing federal graduation statistics that place all student-athletes - and African-American males, in particular - on a higher trajectory of success than their demographic peers in the general student population. Forty-nine percent of African-American male student-athletes graduate, compared to 38 percent of black males in general, the numbers say.

But because the numbers account for part-time students, they tell a misleading story, according to Richard Southall, assistant professor of exercise and sport science at the University of North Carolina, and founder of the Collegiate Sport Research Institute, which held its third Scholarly Conference on College Sport in April. When only full-time male students are compared against Football Bowl Subdivision players, for example, the athletes lag by nearly 19 percentage points, says Southall, who has termed this the Adjusted Graduation Gap. In basketball, the gap is greater than 31 percent. "Our data shows that there is a much larger gap in the graduation rates of football players and men's basketball players than what the NCAA developed with its Graduation Success Rate," says Southall, adding that he hasn't yet broken the numbers down by ethnicity. "The GSR defines success as leaving a school in good academic standing. And if you talk to anybody who works in academic advising, they'll tell you that they can keep guys eligible. You keep them eligible those first few years by keeping them in courses that you want. But few are graduating."

That scenario - student-athletes being steered toward a convenient field of study - still astounds Polite, who was privy to a conversation between Hawkins and a basketball player from a team that had advanced to this year's Elite Eight. "I asked him what his major was, and he said, 'You know, they put me in sociology, but I didn't want to major in that.' He wanted to major in business," says Hawkins, who once served as assistant retention coordinator for the University of Iowa athletic department. "There are cases of athletes being put in less rigorous programs in order to not only maintain their eligibility but in most cases graduate." When asked if he helped keep at-risk athletes eligible at Iowa, Hawkins laughs and says, "I like to think that I was trying to motivate them to graduate."

Can anything be done to change the so-called neocolonial dynamic? Hawkins suggests increasing stipends for student-athletes, reducing course load requirements in favor of quality academic experiences, and increasing minority representation on student-athlete advisory committees and within coaching and administrative ranks. Southall goes further, recommending a return to true four-year scholarships as opposed to the current one-year grant-in-aid approach that he says owes its very existence to the concept of controlling student-athletes. He admits, however, that such a policy reversal is not likely, and therefore neither is the unionization of student-athletes - though the latter has been tried. Says Southall, "The reason it hasn't happened yet is because if athletes do something to step out of line, they can lose that one-year grant-in-aid."

For his part, Polite would like to see a more proactive effort by the NCAA to prepare high school student-athletes for their transition to college. Once there, he says, student-athletes need greater interaction with the chosen institution's faculty. His fledgling mentorship program consists of a meet-and-greet between the athlete and faculty member, the establishment of goals, a definition of purpose on campus beyond sports, and a career progression plan that does not mention the NBA or the NFL. He talks to black athletes (though he's open to expanding the program to all student-athletes) about rebranding themselves as students first. Says Polite, "When a young man looks you in the eye and says, 'I never thought about that,' when his priorities change from basketball to academics, that's powerful."

Hawkins, who played Division II basketball, likewise preaches student-athlete accountability. "I am for college athletics, even though I critique it, because it provided me with an avenue to eventually become a college professor," he says. "One of the things I state in the book is that student-athletes have to take full responsibility from the time they are recruited to the time they graduate. They can't expect that everything is going to be handed to them or that they're going to be able to just waltz through this experience."

With the type of faculty mentors lining up in Knoxville, African-American student-athletes at least have a lead partner in the dance. "We should all have a common denominator, and that common denominator is our students," Polite says. "We have a responsibility to mentor them, to guide them, to lead them, to develop them. That's our job."

At an April 19 meeting with UT athletics officials, including first-year head football coach Derek Dooley, Polite introduced LAMP - a leadership and mentoring program for student-athletes under the ILEAD umbrella - with the goal of not only improving team grade-point averages and graduation rates, but building character in each individual. "Our students will be better people because of this program," he says. "They'll deal with faculty members differently. They'll take their course work and their experience more seriously. We're going to change the culture."