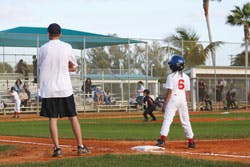 WATCHING YOUR BACK Background checks of volunteer coaches represent just one of the ways in which agencies can shield themselves from liability.

Of the 10,436 profiles submitted by municipalities last year to the National Recreation and Park Association's TLC2 volunteer-screening program, nearly one in 10 people were found to have criminal records. And nearly 40 percent of those people were discovered to have committed an offense that, under the program's standards, precluded them from coaching children. Those "disqualifying offenses" included serious drug and alcohol convictions (114), violent offenses (106), various other felonies (71), recent misdemeanors (49) and even sex crimes (11).

Perhaps the most sobering aspect of those statistics is that one of TLC2's primary functions - as is the case with any volunteer-screening program - is as a deterrent, designed to prevent those people who've been convicted of committing violent or sex-related crimes from even applying to work with groups of children.

When Gil Fried, a risk management consultant and chair of the Sport/Hospitality and Tourism Management Department at the University of New Haven College of Business, years ago helped roll out the city of Houston's first formalized volunteer screening program, a full 1,200 of the city's thousands of existing volunteers refused to submit to a background check, thereby relinquishing their duties. "That's not to say that all 1,200 had criminal histories, but I would assume some of them did," says Fried, on whom NRPA relied as a risk management consultant when it developed the TLC2 program five years ago. "It's true some people aren't going to want a background check done even if they don't have a criminal history, but others actually do have something to hide."

The problem arising in today's economy is that recreation providers are struggling just to keep their core athletics programs afloat, and those are the very programs that rely most on volunteer help. This can create the attitude that the $20- to upwards of $150-per-person cost of a criminal background check - representing just one component of a risk management plan addressing volunteers - is a superfluous expense. But be warned, says Fried and others, that such an investment pales in comparison to those costs, financial and otherwise, that will be incurred if an agency is implicated in a violent crime against a child perpetrated by one of its volunteers.

"Almost every week we see cases of sexual abuse coming up in sports," Fried says. "Organizations are going to be encountering this, whether they like it or not. Even if they do have the best training or preparation, these incidents are going to happen. The question is, are you prepared to deal with this when it occurs in your organization?"

Granted, you don't often see published cases of municipalities or individual parks and recreation departments being held liable for crimes committed by volunteers. In many instances, the alleged perpetrator will be charged with a criminal offense, and then sued independently in civil court. However, experts agree that municipalities and other youth sports providers are not altogether free from liability, even in jurisdictions where nonprofit immunity statutes may exist. Gary Bradley, a partner with the law firm Bradley & Gmelich in Glendale, Calif., suggests that many such cases exist but that municipalities are eager to settle them before they go to trial, in order to avoid the continued scrutiny and mere association with crimes committed against children.

"It's one of these issues where, if I'm a defense lawyer, I have to realize it doesn't really matter how reasonably my clients acted, because what the jury is going to see is a hurt little kid, and they're not going to like it," Bradley says. "Unless I can say that they did a comprehensive background check and it came back clean, the jury is not going to like my story."

For many agencies, conducting background checks may not even be a matter of choice, as a slow but steady wave of state-level legislation requiring them has been growing since the National Child Protection Act became law in 1993 and was amended in 1998 to allow organizations to use nationwide fingerprint-based criminal history checks. Minnesota, Florida, Oregon and Ohio are among the states that have since passed laws requiring or at least recommending certain organizations use background checks to screen volunteers planning to work with children. Similar legislation is pending in California and other states.

Insurance providers also are now requiring background checks as special conditions within certain policies. For example, the Midland Park (N.J.) Borough Council in May passed an ordinance requiring all volunteer coaches to be fingerprinted and submitted to background checks with the Federal Bureau of Investigation and the state police's bureau of identification. Such was the insurer's requirement for the borough's recreation teams, volunteers and employees.

Unfortunately, whether background checks of volunteer coaches are required by state law or by an individual insurance plan, the onus always falls on municipalities to pay for them. The resulting vexation is two-pronged for most recreation departments, which a) have little money to devote to such new initiatives, and b) have trouble enough attracting quality volunteers without the additional screening measures.

"When the Florham Park (N.J.) Recreation Committee recommended mandatory criminal background checks for coaches in our youth sports programs last year, there was discussion of who would pay for it," the borough's mayor, Scott Eveland, announced as a new mandatory screening program was introduced last October. "I didn't want to put this burden on the volunteers who give of themselves so generously, or on the backs of taxpayers."

Therefore, Florham Park secured an $8,000 grant from the Megan Nicole Kanka Foundation, estimated to cover the cost of the recreation department's approximately 300 background checks in 2010. Midland Park's recreation director, meanwhile, told the council that she was confident about receiving a $6,000 grant that would cover the cost of 200 fingerprintings and background checks.

If all else fails, says Bradley, "You can force the volunteers to pay for it, although obviously you don't want to reduce the number of potential volunteers."

Bradley's courtroom experience with volunteer screening is complemented by his personal experience as a father and coach in a community recreation sports league. "I had to get fingerprinted and checked," he says. "It was a complete hassle, but it was absolutely the right thing to do." And from a legal standpoint, adds Bradley, "It's close to a completely indefensible position for the park and rec agency if they don't take the time to do this."