A University of Iowa investigation into the January hospitalization of 13 football players has determined that an intense exercise regimen on the heels of a three-week layoff from supervised workouts was the cause of the players' rhabdomyolysis, a potentially fatal breakdown of muscle fibers into the bloodstream, where excess proteins can clog the kidneys and cause renal failure. 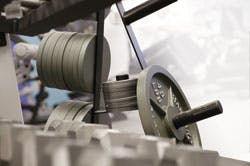 Strenuous exercise after extended down time has been blamed for injuries to student-athletes in Iowa, Oregon and South Carolina.

A University of Iowa investigation into the January hospitalization of 13 football players has determined that an intense exercise regimen on the heels of a three-week layoff from supervised workouts was the cause of the players' rhabdomyolysis, a potentially fatal breakdown of muscle fibers into the bloodstream, where excess proteins can clog the kidneys and cause renal failure. A far more surprising revelation within the five-member presidential committee's 18-page report, released March 23 to the state Board of Regents, is the fact that Iowa strength and conditioning coaches apparently had no prior knowledge of rhabdomyolysis as a medical condition.

According to the report, obtained by The Des Moines Register, the workout in question occurred Jan. 20, three weeks removed from the Hawkeyes' upset of Missouri in the Insight Bowl. Ten of the players said they experienced muscle soreness and discolored urine - symptoms consistent with rhabdomyolysis - within three days of the workout. It wasn't until a player was diagnosed with high blood pressure on Jan. 24 that blood tests led to the rhabdo diagnosis. That evening, team members received a text message describing the symptoms of rhabdomyolsis and urging players with those symptoms to seek hospitalization. By Jan. 30, 13 players had been treated and released from University of Iowa Hospitals and Clinics.

While the report cleared all players, coaches, physicians and trainers of any wrongdoing, it offered several recommendations, including discontinuing the "intense, high-volume squat-lifting workout" that caused 67 percent of players to experience unusual stiffness. Players reported leg pain so severe they had difficulty walking, climbing stairs and putting on their shoes and socks.

The committee faulted coaches for not recognizing the severity of these and other post-workout symptoms, and while it acknowledged the need for football coaches to push players beyond their own perceived limits, the committee also said staff must consider outside factors when players who usually train at a high level struggle with a given workout. Wrote the committee, "The coaching staff must now begin asking those hard questions and find ways to distinguish the usual moaning and groaning of players pushed to excel from signs of real distress."

Much of the knowledge gained about rhabdomyolysis has come from police and military training environments, according to Priscilla Clarkson, professor of exercise science at the University of Massachusetts at Amherst and a leading authority on the condition. But episodes like Iowa's are not new to athletics. Last August, 18 football players from McMinnville (Ore.) High were hospitalized after preseason workouts. Five were diagnosed with rhabdomyolysis. In 2007, seven University of South Carolina swimmers suffered the same condition. Intense workouts on the heels of prolonged layoffs appear to be the common denominator.

"Most coaches know how much an athlete can do, and they up the intensity gradually," says Clarkson, whose work on the committee that added mention of rhabdomyolysis to the NCAA Sports Medicine Handbook predated the South Carolina case. "And if it's a new exercise they haven't done, then it starts out slow, with fewer repetitions and then increases gradually. What happened in Iowa is that the intensity was increased too much, too soon."

Though rare, rhabdomyolysis is most often manifested in team sports, where conditioning often requires all individuals to perform the same tasks at the same level of intensity. According to certified athletic trainer Paul Ullucci, president of Ullucci Sports Medicine in East Providence, R.I., and a National Athletic Trainers Association board member, "Team training by definition does not take into consideration each individual's capabilities and tolerances, let alone if there are underlying medical conditions that prevent an athlete from performing at his or her best."

Are certain individuals more susceptible to the condition than others? After all, for every Iowa football player hospitalized with rhabdomyolysis, six completed the workout unharmed. "It does appear there are people who are more susceptible," says Clarkson, who adds there is no conclusive evidence to date indicating that steroid or supplement use plays a role in rhabdomyolysis risk. "It could be that some people push themselves beyond what we call the tolerable limit."

"It is important to stress that those who have this condition are not weak or not up for the challenge, but rather that the exercise routine was not properly designed to meet their needs and capabilities on that particular day," Ullucci says. "The factors that make an athlete more or less susceptible to this condition are numerous and can vary from day to day. They can range from the simple - how much water the athlete drank that day - all the way to preexisting medical conditions such as kidney disease and sickle cell trait. As individuals we all have varying tolerances to activity. To assume all can perform the same workout at the same intensity is going against the very foundation of everything modern medicine and sports conditioning have found over the past two decades."

The "no pain, no gain" approach to strength conditioning may be in atrophy, but coaches still like to claim that no team will "outwork" theirs. In the ultra-competitive field of intercollegiate athletics, a fine line exists between challenging, productive workouts and dangerous ones. "Muscle aches and soreness are the first signs of rhabdomyolysis," Ullucci says. "Unfortunately, they are also the first signs of a hard, effective and safe workout. For this reason, it's important to look at the entire athlete. Muscle soreness combined with fatigue and a sense of not feeling right is, in fact, a true sign of the condition in its earliest stages. It is at this point that the athlete should be pulled from the workout, given proper hydration and evaluated by an athletic trainer. Often, the athlete can be managed without hospitalization by allowing the body to repair itself naturally over time."

"I tell my coaches all the time that if they see an athlete who's at the very micro level of distress, pull him out of the activity and make sure he has proper recovery," says Chuck Stiggins, executive director of the Collegiate Strength & Conditioning Coaches Association. "We're all about maximizing athletic performance, but first and foremost we want to ensure the health and safety of the student-athlete."

The telltale signs that a student-athlete has crossed over into the danger zone are severe muscle pain and darkened urine, which represents the excess muscle protein that the kidneys can no longer handle. The condition is treated intravenously with a mix of saline and bicarbonate as a way to increase urine alkalinity and reduce protein buildup in the kidneys, Clarkson says.

That's more than most athletic department officials should have to know, given how easily preventable rhabdomyolysis is through proper hydration and exercise moderation. "Treat athletes as individuals and train them accordingly, making sure that exercise routines are designed to challenge each athlete but not exceed their tolerance to activity," Ullucci says. "Realize that athletes have challenges academically, socially and medically. Understanding that these may impede their ability to perform on any given day is fundamental to preventing this condition, as well as optimizing athletic performance."

"Strength coaches are generally well trained, as are athletic trainers and athletic directors, and they have a sense of what's too much," says Clarkson, adding that this is what has kept cases of rhabdomyolysis the exception and not the rule in intercollegiate athletics. That said, athletic departments should never lose sight of the condition and its potentially deadly consequences. "It's very rare now," Clarkson says of rhabdomyolysis-induced fatality, "but it could happen."