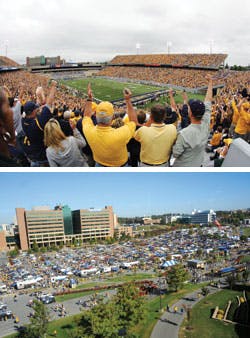 Oliver Luck says he wasn't particularly cognizant of the drinking culture surrounding West Virginia University football games 30 years ago when he quarterbacked the Mountaineers. Now, as he approaches his first anniversary as WVU's athletic director, he can't ignore the effect alcohol is having on the game-day experience in Morgantown. In poring over fans' written complaints, some of them years old and resubmitted for his review, Luck has found what he calls a "red thread."

Luck's fear is that Mountaineer Field's stature as a family destination is eroding. "When you read enough letters and people are saying they're concerned enough that they may not bring their kids and grandkids, that's tough," he says. "We need all those kids and grandkids to grow up on a steady diet of Mountaineer football. In my mind, at least, that's when memories are created and that's how you make fans for life."

His solution? Allow beer sales inside the stadium.

That's one of two alcohol-related proposals that Luck has made to the WVU Board of Governors. The other involves discontinuing the school's longstanding policy that allows fans to leave the stadium at halftime and be readmitted. "We rely on our public safety folks to advise us, and they believe that there are two periods of binge drinking at our tailgates - one is pregame, when people quote-unquote get their buzz on, and then at halftime," says Luck, who admits his beer sales proposal may seem counterintuitive. "We can take care of halftime; we can't really take care of pregame. And so we think that controlled sales will lead to folks feeling as though they don't have to consume as much alcohol as possible" before entering the stadium.

It's difficult to get a handle on how many institutions nationwide allow alcohol sales in their athletic facilities (the NCAA doesn't keep track), but several schools within WVU's own conference have done so without any apparent fallout. "I don't think we'll have an experience that's really any different from the schools in the Big East that have been doing this for a number of years," Luck says.

Schools outside the Big East report similar success with controlled alcohol sales. The University of North Dakota, an otherwise dry campus that boasts what many consider to be the premier college hockey venue in the country, has sold beer and wine to the general public inside Ralph Engelstad Arena since the privately owned facility opened in 2001. Even students who are of legal drinking age can purchase alcohol (multiple ID check stations and colored wristbands are employed), though they aren't allowed to carry it into student seating sections. Concessions manager Jerry Robinson reports no major change in alcohol-related incidents from the days he managed UND's previous hockey facility (which didn't sell alcohol) to now, and his game-day food and beverage crew of 125 has never failed an under-age compliance check administered by Grand Forks police. "My big pitch to bartenders is, 'I don't care if we don't sell a couple of beers, as long as we're selling beer safely,'" Robinson says. "I think the university respects the fact that we're not out to make every dollar. We're out to keep our patrons safe. Our ultimate goal is that everybody has a great experience here, and too much alcohol will ruin that in a heartbeat."

Robinson has received alcohol management training through the nonprofit TEAM Coalition since 2003 (and Training for Intervention Procedures, or TIPS, prior to that), something that even schools that don't serve alcohol at sporting events have undergone. The University of Notre Dame incorporated TEAM training into a 2009 initiative to improve the overall football Saturday experience - from ticketing and parking to security and concessions. According to Mike Seamon, Notre Dame's associate vice president for campus safety who oversees game-day operations, "We started addressing how we deal with disruptive behavior, knowing that a lot of disruptive behavior comes as a result of people who are impaired from alcohol."

The biggest improvement, Seamon says, has been the implementation of game management teams, or GMTs - 50 handpicked staffers who police the crowd in pairs and intervene when a situation escalates beyond the control of rank-and-file ushers. Even then, fans are given a chance to correct their behavior before being ejected and/or arrested (that is, unless they have engaged in a full-scale brawl, for example). Fans are handed a courtesy card, which Seamon likens to a yellow card in soccer, outlining Notre Dame's conduct expectations. If problems persist, police are summoned to the scene.

"We've gone through this model now for two football seasons, and it has changed the game," Seamon says. "Ninety-eight percent of the people want to comply. If you counsel them and work with them, everything will be okay. We have 83,000 people in our stadium. We'll always have somebody who won't comply, and we'll ask him or her to leave."

While Notre Dame - and the majority of its fans, according to Seamon - is content with its no-alcohol policy, other schools are still mulling the possibilities.

The University of Minnesota, which planned for premium-seating alcohol sales as TCF Bank Stadium was under construction, was advised by the state Legislature prior to the on-campus football stadium's opening in 2009 that it had to make alcohol available to all fans or none. With students comprising 20 percent of the ticket holders on any given Saturday, Minnesota opted for the latter - despite a lengthy track record of general public beer sales at the off-campus Metrodome. A legislative committee voted in April to allow limited alcohol sales, but the governor and full Legislature had not weighed in as of this writing. According to Garry Bowman, UM's director of athletic communications, the school would prefer that alcohol sales decisions be left to its Board of Regents. "We're just trying to get the local control back to decide where we want to sell it," Bowman says.

Weeks later, the University of New Mexico came a step closer to being able to sell beer and wine in premium seating areas at its basketball and football venues after a court arbitrator ruled that the city of Albuquerque improperly denied UNM's request for a waiver of a state law prohibiting alcohol sales within 300 feet of the school. As of this writing, state Regulation and Licensing Department approval was pending.

West Virginia's alcohol sales fate could be sealed June 3, when the Board of Governors is likely to decide whether to rewrite established policy prohibiting alcohol sales in any WVU athletic venues. The logic of Luck's proposal has been questioned in countless small-town newspaper editorials, yet it is supported by WVU's president and independently corroborated by TEAM Coalition executive director Jill Pepper. "The service of alcohol is a much more responsible way to ensure only those who are of drinking age and only those who are not showing warning signs of impairment are allowed to drink," Pepper says. "TEAM Coalition advocates responsible service of alcohol. It's not just turning the taps on. It's training your employees. It's having alcohol service policies such as ID checks and cutoff times, and having consequences if those policies are violated. All of those pieces need to be in place so that when individuals walk up, they are reviewed before they are approved to drink. If you're in a tailgate lot and you're popping your trunk and reaching in, there's nobody to say, 'Hold on, are you over the age of 21?' and, 'How much have you already had to drink?'"

Of course, there's a monetary incentive to the sale of alcohol, no matter how controlled or limited. Luck estimates that beer sales inside the stadium could fortify the athletic department's $50 million budget with an additional $500,000 to $1.2 million per season, depending on such variables as team success, weather and kickoff times. And while that's enough revenue to "allow lacrosse teams to be funded, and other sports, as well," Luck insists this isn't about the money.

"We have an alcohol issue with football, and it sounds funny to fight fire with fire," Luck says. "But I believe that if you're 21 years old and have an ID and you want to buy beer at a sporting event, you should be able to do that. That's how you teach college students to have an appropriate relationship with alcohol. Alcohol is not going away. Prohibition didn't work."