The 105,000 fans who packed Ohio Stadium during an average home football game in 2010 generated 111.5 total tons of waste by season's end. Roughly half of that waste - a mix of mostly food scraps and concessions packaging - wound up in landfills. 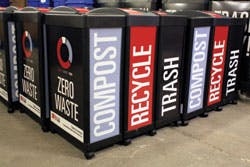 The 105,000 fans who packed Ohio Stadium during an average home football game in 2010 generated 111.5 total tons of waste by season's end. Roughly half of that waste - a mix of mostly food scraps and concessions packaging - wound up in landfills. Corey Hawkey, Ohio State University's program coordinator for energy and sustainability, knows the Buckeyes can do better to minimize the amount of refuse that must be hauled away, at considerable expense.

"One of our bigger expenses is our energy bill, and the other big expense is getting rid of our trash," Hawkey says. "We save a lot of money by recycling."

This fall, OSU's Zero Waste Initiative will attempt to divert 75 percent of Ohio Stadium waste from landfills, with a goal of 90 percent by next year. In a departure from years past (a stadium recycling program has been in place since 2007), Ohio State is introducing waste receptacles dedicated to the different types of waste - recyclables, compostables and trash - collected inside the stadium, with fans for the first time playing a frontline role in the sorting process. This will minimize cross contamination onsite, perhaps the biggest inhibitor to landfill diversion, and allow Waste Management, the OSU partner that until now has had to pick through a single stream of stadium waste, to employ more sophisticated (and cost-effective) sorting processes on the back end.

Still, Hawkey admits "zero waste" is a bit of a misnomer; no stadium in the country will ever be completely waste-free. "We define zero waste as diverting 90 percent or more of our waste from the landfill," he says. "Coupled with that is our doing 100 percent of what we can do to reach that goal."

Proof that it can be done, at least on a smaller scale, is out there. At the time its Aggie Stadium (capacity 11,000) opened in 2007, the University of California Davis claimed to be the first institution in the nation to set a goal of zero-waste stadium operations, and it arguably has gotten closer to reaching that goal than any school since. During one football game last fall, UC Davis diverted from landfills 89.83 percent of its stadium waste - tops among the 75 schools participating in the 2010 Game Day Challenge, an initiative of the Environmental Protection Agency's WasteWise program. Ohio State placed second, diverting 68.41 percent - a figure that includes waste generated within the stadium (where OSU hit 75 percent), as well as in tailgate lots. The EPA estimates that participating schools targeted more than 2.8 million fans and diverted more than 500,000 pounds of waste, which prevented the release of nearly 940 metric tons of carbon dioxide. According to the program's website, "The greenhouse gas emissions avoided is equal to the carbon dioxide emissions from more than 105,000 gallons of gasoline being consumed."

Combating excess waste inside the stadium starts at the source. Sodexo, which handles concessions at UC Davis, only sells items at Aggie Stadium that are already packaged in or can be served in recyclable or compostable materials. Instead of offering chips in individual plastic bags, chips are purchased in bulk and served in paper boats. Drinks are served in paper cups, with compostable straws and without plastic lids. Plastic-wrapped candy bars are eschewed in favor of boxed candy.

Ohio State, another Sodexo client, has asked the concessionaire to make similar switches at Ohio Stadium. "We've been talking to them and researching this with them for a couple of years," says Hawkey, who joined the OSU staff 16 months ago. "We were ready to do it on our end, they said they were prepared to do it, and it's moving forward."

Given that Ohio State's contract with Sodexo is worth a reported $10 million per year, it's not surprising that, as Hawkey puts it, "there really wasn't any strong-arming." But additional investments on Ohio State's part had to be made. The dedicated waste receptacles, manufactured in-state from recycled plastics, cost $145 each and will be limited to club, suite and press-box areas. Containers on the main concourse will be repainted and repurposed to receive the various forms of waste. In addition, Ohio State will hire temporary game-day help to direct traffic at receptacles this season, with the hope that volunteers will eventually take over - and that one day the fan base will become so trained in waste diversion that container coaching will no longer be necessary. (It should be noted that Ohio State has for years provided fans with bags to separate trash generated at tailgate parties outside Ohio Stadium.)

Including marketing and stadium signage, Hawkey estimates Ohio State's first-year financial commitment to the Zero Waste Initiative will fall between $100,000 and $150,000. A lot of that represents one-time costs, adds Hawkey, who actually anticipates the OSU model opening new revenue streams for the athletic department. "We're really hoping to attract sponsorship to cover our costs," he says. "We're confident we can do that by attracting sponsors that aren't currently with us, and also attract additional dollars from alumni who are sympathetic to these kinds of issues."

Unfortunately, resource constraints may force the EPA to scrap this year's Game Day Challenge, according to agency spokesperson Mollie Lemon. Even if that's the case, momentum clearly has been established. Ten program participants diverted at least half of their waste during one self-selected game last October. That's two more than the total number of schools that took the diversion challenge in 2009, the initiative's inaugural year. (The University of Colorado took top honors then, with a diversion rate of 78 percent.)

Moreover, recycling emerged as the most popular green initiative in the first two years that the College Athletic Department Sustainability Survey was conducted (another installment is expected this year), with more than a third of the 73 schools responding to the 2010 survey indicating their intention to measure the overall diversion rate or the recycle rate for some or all of their athletic department's operations. Removing discarded food from the waste stream was widely viewed as the greatest opportunity for diversion rate improvement.

As Ohio State introduces a separate compost stream this season, Hawkey anticipates a few first-year glitches. "Our biggest contamination issue will be getting plastics and metals in our compost stream," he says. "If that's severely contaminated, the whole batch is going to be denied and it's going to severely affect our diversion rate. I'd be willing to bet that it's going to happen, but we're going to do our best to keep that stream as clean as we can."

Athletic departments yet to seize diversion opportunities may not fear such granular issues as compost contamination, but rather what potential effect the individual responsibility of sorting recyclables and compostables has on the fan experience. As far as Hawkey is concerned, stadium recycling is a no-brainer. "It's the thing that everyone can and should do. It's the face of sustainability, in some ways," he says. "It's an opportunity for athletic departments to do the right thing and be an environmental steward. We have 100,000 people walking through the gates on those game-day Saturdays, and we have double that out in the tailgates. It's a great way for us to demonstrate leadership to our students, alumni and community."