Arizona is leading the next phase of concussion education and management. 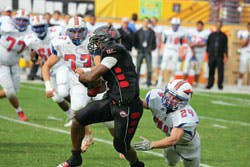 Student-athletes in Arizona must pass a test demonstrating their knowledge of concussions before they can play. (Photo by Paynter's Pics, courtesy of AIA)

Arizona is leading the next phase of concussion education and management. In August, the Arizona Interscholastic Association - following the April passage of a state law that requires schools to provide training about the dangers of traumatic brain injuries - introduced a mandatory program in which all high school sports participants must take a 50-minute multimedia online course and pass a formal test before they put on a uniform.

That aggressive move makes Arizona the first state to ensure that high school student-athletes demonstrate competency in actually understanding how concussions occur, the symptoms associated with them and how they can be treated and their effects mitigated. The program, observers predict, will change the face of high school sports in a state in which approximately 7,000 student-athletes suffer concussions every year.

"My gut tells me that we've taken a big leap forward and set the standard for educating high school student-athletes about concussions," says Javier CÃ¡rdenas, a neurologist at the Barrow Neurological Institute at St. Joseph's Hospital and Medical Center in Phoenix, who oversees the educational effort. "My anticipation is that other state associations or counties will adopt the same model or a similar one."

Some already have. The Prince William County (Va.) School Board last spring began requiring all high school and middle school students interested in playing sports to attend an hour-long seminar on concussions with at least one parent. Delivered at each school by that school's full-time certified athletic trainer, the program consists of a lecture presentation and a harrowing 12-minute video featuring former La Salle University football player Preston Plevretes, who has never fully recovered, physically or mentally, from a concussion he suffered six years ago upon returning to action too soon following a previous head injury. All attendees must sign a confirmation of attendance, or they will not be allowed to participate on a team.

As in Arizona, last year Virginia lawmakers passed a bill requiring school jurisdictions to provide concussion education programs. But while most opt to fulfill that requirement by simply asking students and parents to sign a form or click through a brief online presentation that does not include a testing component, Prince William County has good reason to take extra precautions. In September 2010, 17-year-old Brentsville High School senior football player Gilbert Allen Austin Trenum III hanged himself three days after suffering what family members believe was at least his fourth concussion. They link his suicide to lingering effects from that blow.

"My wife and I avoid the term 'concussion' now," says Trenum's father, Gil, a member of the Prince William County School Board who spearheaded the drive to develop comprehensive concussion education. "Instead, we say 'traumatic brain injury.' There is still so much we don't know about the long-term impacts of this, which is why we need to take these things seriously. I would hope that some of what we're doing becomes a model for other schools."

A year ago this month, the National Football League began suspending players for dangerous and flagrant hits, particularly those involving helmets. That decision ushered in a new era of vigilance in the concussion discussion, and by early 2011, the league was calling for all 50 states to pass laws designed to protect student-athletes from returning to play too soon after suffering a concussion. Today, according to USA Football, at least 32 states and the District of Columbia have done just that, and no fewer than eight other states have legislation pending.

Additionally, the online coach-education course "Concussion in Sports - What You Need to Know" (developed by the National Federation of State High School Associations in May 2010 and hosted by Michael Koester, director of the Sports Concussion Program at the Slocum Center for Orthopedics and Sports Medicine in Eugene, Ore.) reached a milestone in August by surpassing more than 200,000 participants. The course provides an overview of how to recognize signs and symptoms of a concussion and includes guides for parents and coaches, an athlete fact sheet and materials to implement concussion-treatment protocols.

The AIA requires all of its member-school coaches to take the NFHS course, and the association's Sports Medicine Advisory Committee (which CÃ¡rdenas chairs) anticipated back in 2010 that the association would also need to take the lead on concussion education efforts for Arizona's estimated 95,000 high school student-athletes. "As soon as we saw it was going to be our responsibility, we immediately pulled together some pretty good players," says AIA executive director Harold Slemmer, referring to Barrow and CÃ¡rdenas, the Arizona Cardinals (which backed the AIA's effort) and the educational technology program at Arizona State University (which created the multimedia educational program called Brainbook). "And I've got to be honest with you: Even if part of the bill did not require us to provide education, we would have moved ahead with this, anyway."

Brainbook represents a new approach to e-learning. Designed to look like a social networking site, complete with profile photos and "like" and "dislike" buttons, it provides students a fun-to-navigate series of educational nuggets, activities and videos. Users are not permitted to skip content, and they can navigate the program at home (preferably alongside a parent) or on a school computer. At the end, students must score 70 percent or higher on an exam before being cleared to play. CÃ¡rdenas, who also serves as the director of Barrow's B.R.A.I.N.S. (Barrow Resource for Acquired Injury to the Nervous System) program, says 92 percent of the first 350 participants passed the test on the first try. The short video segments, featuring such local sports celebrities as Arizona Cardinals head coach Ken Whisenhunt and Diana Taurasi from the WNBA's Phoenix Mercury, can easily be swapped out to feature popular athletes in other states.

Brainbook is a blueprint for the future of education, claims Slemmer, a former high school principal. "I think this is a prelude to how curriculums are going to be delivered someday," he says. "This generation of kids is used to that type of platform. Information is coming at them in so many mediums, and this is what they are used to. Brainbook brings all of that together to give them the opportunity to learn and absorb this information as quickly as possible."

So far, reaction from student-athletes and parents about Brainbook and Prince William County's program has been encouraging. Slemmer reports that Brainbook is getting rave reviews for being entertaining, educational and easy to use. And despite a few families "who aren't happy about having to attend the session in person," Trenum says most of the feedback from the estimated 5,000 student-athletes in Prince William County (plus their parents) who have attended the seminar has been positive.

Teachers also are benefitting. Educators in both Arizona and Prince William County are informed when one of their students has endured a concussion, and they are being trained to recognize symptoms, as well as observe a concussed student's classroom behavior and closely monitor his or her grades. In Arizona, a $250,000 grant from the nonprofit New York City-based Charles Maddock Foundation will allow CÃ¡rdenas and his colleagues to develop an injury surveillance program that also will include a secure social network for teachers, coaches, athletic directors, certified athletic trainers, parents and players to converse with one another about the progress of a concussed student-athlete.

CÃ¡rdenas adds that efforts are under way to adapt Brainbook to the youth sports segment, substituting a cartoon-like interface instead of the social media design that is proving to be popular with high school students.

Brainbook's high school module can be viewed online and is available for any other school, district or state association to use. "We're definitely willing to share it," CÃ¡rdenas says. "We would hope other administrators would engage their state's professional sports organizations to get them to participate in the video portions."

Says Slemmer, "If I were an administrator in, say, California, and I knew this was available - and it was available for free - I'd make that happen."