On the final Saturday night in September, a group of student-athletes from Sun Prairie (Wis.) High School hosted the first all-school "dry party" - three hours of open gym and swim, inflatable jousting, plenty of pizza and college football on TV in the commons, with members of the football, soccer, volleyball and dance booster clubs donating their time and resources. 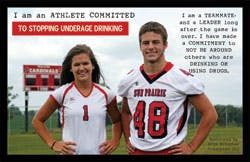 On the final Saturday night in September, a group of student-athletes from Sun Prairie (Wis.) High School hosted the first all-school "dry party" - three hours of open gym and swim, inflatable jousting, plenty of pizza and college football on TV in the commons, with members of the football, soccer, volleyball and dance booster clubs donating their time and resources. Even though only about one in 10 of the suburban Madison school's 1,900 students in grades 9 through 12 showed up, it was enough to convince athletics and activities director Jim McClowry that Athletes Committed needs to plan more such free events.

"I told the kids, 'People are not going to come because I'm inviting them; they're going to come because you - the student-athletes - are telling them this is the place to be,' " he says. "I received e-mails from kids the day before the dry party who said, 'Hey, Mr. McClowry, I'm sorry but I'm not going to make it tomorrow night because of a family commitment.' I didn't expect anything like that. But I appreciate that these kids take something like this so seriously that they feel they're letting somebody down if they're not there."

Athletes Committed is a growing group of about 50 student-athletes who have pledged to make wise choices regarding alcohol and drug use by adopting and adhering to the principles of a national initiative called "Life of an Athlete," created by the Saratoga Springs, N.Y.-based American Athletic Institute. The Life of an Athlete program not only emphasizes research about the impact of drugs and alcohol on student-athletes and all young people, it also reinforces the value of good training habits, proper nutrition, strong communication skills and model citizenship. Among AAI's most sobering pieces of research? One night of drinking can wipe out two weeks of training.

"We're really working to change the culture here," McClowry says. "And I've challenged our Athletes Committed kids by saying, 'It's not just our athletic code that's going to make the difference; it's how you're selling it to your teammates and encouraging them to make smart decisions.'"

The Life of an Athlete program was developed by AAI founder and director John Underwood, a former NCAA All-American, international-level distance runner and coach or advisor to more than two dozen Olympians. "We've got to have athletes who form their own nucleus for doing things the right way," he says. "I'm so sick of hearing athletes say, 'I would've, I could've, I should've. But I didn't.'"

Billed as a five-step prevention/intervention process that involves the entire community (not just student-athletes, parents, coaches and school administrators), the Life of an Athlete program is wide open for interpretation and implementation. Individual schools, districts and - in the case of New Mexico, New York and Oklahoma - entire states have adopted it and shaped it to fit their needs. Sun Prairie has Athletes Committed, established several years ago by McClowry but reinforced and bolstered by a late-September school appearance by Underwood, and Cody (Wyo.) High School has Cody CAN, which stands for "Change Attitudes Now" and includes a program called "Pure Performance" that bears the tagline "Maximize Your Potential Today, Tomorrow, and Forever."

The Oklahoma Life of an Athlete program, recently developed by the nonprofit organization Fighting Addiction Through Education, aims to inform all state residents about the impact of alcohol and drugs on athletic performance. The New Mexico Activities Association, meanwhile, received a $400,000 grant from the state Department of Transportation to launch lifeofanathlete.com in July 2010 with its sole focus on underage drinking. The free 45-minute online interactive program is intended for use by everyone (not just high school student-athletes in New Mexico), and more than 13,000 individuals - including 4,000 from other states - logged on during its first 14 months. Multiple video segments include interviews from prison with Gabe Gurule, a highly recruited former three-sport athlete at Albuquerque's Manzano High School, who is serving an eight-year sentence for vehicular homicide after he struck a taxi cab and killed three people on his way home from a party.

According to the DOT, New Mexico leads the nation in children who consume their first alcoholic beverage prior to age 13. "That's a horrible statistic," says Robert Zayas, the NMAA associate director who oversees the state's Life of an Athlete program and fostered the DOT partnership. "If we can get another round of funding, maybe we can start incorporating other things into the program, since we've already got alcohol covered."

So far, seven of New Mexico's 89 school districts mandate that student-athletes take the online program, which allows the NMAA to gauge alcohol awareness issues and trends at schools throughout the state via a registration process for in-state participants. "We're definitely encouraging people to make the program required," Zayas says. "But if we did that right away, there would have been no buy-in from communities, and it would be just another requirement from the state association. If we allow school districts to see the need for and the benefits of this program, and then on their own make it required, it will be a lot more effective in those communities."

Sun Prairie's McClowry is noticing plenty of Life of an Athlete benefits this fall. "A lot of people are talking about it," he says, adding that the program's nutrition component also is gaining traction. "We're considering changing the basketball practice schedule to accommodate our kids being able to fuel up better after school, and we've made a phone call about placing milk machines in the athletic wing. I've even had some parents tell me they're changing the way they're doing things at home by not having adult parties with alcohol at their house if kids are present, or they're limiting their intake of wine at dinner."

The culture shift appears to be in full swing at Sun Prairie High, and McClowry expects today's freshmen and sophomores to help set even higher standards for incoming classes. "Kids who are now eighth-graders are going to be in a culture at Sun Prairie High School where drugs and alcohol are not the things to do, because they are going to have juniors and seniors ahead of them actively modeling how to make smart choices," he says. "Each class is going to get stronger."

But it won't be easy. As Collin Enstad, a member of Athletes Committed and a senior football player and wrestler, recently told the Wisconsin State Journal, "We have gotten some flak [from peers]. But you have to stand up for what you believe in."

That's the message McClowry and Zayas are trying to send to all students. Zayas recounts a follow-up visit he paid to Gurule in the Central New Mexico Correctional Facility to show him the finished lifeofanathlete.com program. "He sat there with tears in his eyes and said, 'I wish somebody would have had a program like this when I was in high school. I might be in a different place right now,'" Zayas says. "So I always tell kids today, 'Gabe's excuse was not having this program. You don't have an excuse.'"