How High School ADs Can Rein in Questionable Coaching Behavior 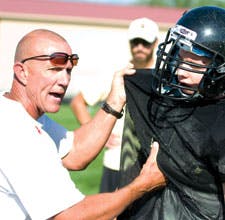 In late September, Jim Marsh, a junior varsity football coach at Marcellus (N.Y.) High School, was suspended without pay for two weeks after he tried to motivate players following a loss by stopping at a cemetery and having them lie face-up among the gravestones. He reportedly then told players to rise up and bring their season back to life. A few weeks later, Collierville (Tenn.) High School football coach Shawn Abel's pregame profanity-laced locker-room tirade was posted as an audio file on YouTube; he resigned within the week, but the clip lived on and had received almost 25,000 listens by early December.

Then came word of assistant freshman football coach Michael Pickering, who was arrested for circulating the password to a pornographic website among his players at Staples High School in Westport, Conn. - a fumbled attempt to, in his words, "create camaraderie." Derek Howard, a teacher and boys' basketball coach at Winnetonka High School in Kansas City, Mo., is the subject of a racial harassment complaint filed by an African-American player who captured Howard on a cell phone video smugly calling that player a "future welfare recipient." And even though Pat Lynch resigned as head football coach at Buffalo (Wyo.) High School after distributing an offensive and sarcastic "Hurt Feelings Report" to his players that contained strong homophobic and sexist language, he remains a guidance counselor at the school.

"The truth of the matter is that these coaches don't think they're doing anything wrong," says Tim Flannery, the assistant director in charge of coaches' education at the National Federation of State High School Associations. "They're ignorant. They put winning ahead of educational outcomes, and as soon as they do that, there are going to be problems."

The actions of these five coaches and others could very well end up as part of the curriculum of a new online education course that the NFHS hopes to launch this spring with the assistance of a corporate sponsor. "Creating a Safe and Respectful Environment" will address verbal, physical and emotional abuse - including sexual harassment, bullying, hazing, inappropriate relationships and Internet use - by providing examples of poor decisions by coaches and sharing sample policies to help ensure against other coaches making the same mistakes. Believed to be the first of its kind, the course also will include a section for student-athletes and their parents that offers guidelines for reporting questionable behavior.

"These are the kinds of issues that turn a school district upside down," Flannery says. "The hard way to attain improvement is through education, but it's the only way. I think we can reduce a lot of issues if we lay it on the line for coaches and say, 'Here are our expectations, and here are the consequences if those expectations are not met.' Will we eliminate these types of incidents? Probably not. But I'm all for minimizing them as much as we can."

Mike Ellson, for one, will be among the first in line to take the "Creating a Safe and Respectful Environment" course when it becomes available. "I can't tell my coaches to go out and take these courses if I, as an athletic administrator, am not willing to take them," says the former high school basketball coach now in his 25th year as athletic director at Christ Presbyterian Academy in Nashville, Tenn. And this is a course that coaches need more than ever, he says, adding that too many coaches are "going to desperate measures to motivate kids."

Instead, he suggests a notion that seems almost quaint in today's high-stakes, win-at-all-costs interscholastic sports culture: "Be an encourager," says Ellson, who presented a workshop titled "Developing the Credible Coach" at the 2010 National Athletic Directors Conference in Orlando, Fla. "When coaches build a coaching staff, they need to have a staff that loves each other and the players. And when I say 'love,' I mean unconditional support. When a quarterback makes a mistake, a coach has two choices: He can blast that player and let him have it, or he can bring him over to the sideline, mentally help him work through it, throw the mistake in the trash can and get ready for the next play. The coaches who erase the mistakes are the successful coaches."

Both Ellson and Flannery express disbelief at the tactics coaches are trying these days to make their teams successful. Equally as troubling, they say, is how many athletic directors are unprepared to deal with, for example, a coach whose team makes unscheduled stops at cemeteries. "If that had been my coach," Ellson says, referring to Marsh, "I would have tried to take the blame first. Have I put that much pressure on him that he would do something like that to try to motivate his team? I want my coaches to tell me about their motivational tactics. That way, they can run these ideas by somebody. Coaches need to know they don't have to have all the answers."

Athletic directors, according to Ellson, also should require coaches to coach with professionalism and integrity regardless of whether the team wins or loses, and with a vision that sees beyond the current game and even the current season. But when some schools have a hard time even finding coaches - let alone coaches who possess those qualities - following Ellson's suggestions may not be feasible. "Schools are constantly having to replace coaches," Flannery says. "It's an ongoing thing. Consequently, there's an under-supply and an over-demand situation, and schools many times end up hiring a warm body."

Ellson oversees up to 70 coaches every academic year at Christ Presbyterian, and he tries to make sure none of them are just warm bodies. "My job is to get to know my coaches," he says. "Banners and trophies are fine, but they're eventually going to collect dust. Relationships last a lifetime."

By developing effective working relationships with his or her coaches, an athletic director will be more apt to notice warning signs that a coach might be about to go over the edge. Is he isolating himself more than usual? Has his personality shifted from being mostly outgoing to obviously withdrawn? How does she respond to a tough loss - not just on game day but one day, one week and even one month later?

Flannery thinks incidents of coaches behaving badly are being reported more today than they were even a few years ago, when such behavior often was covered up. "I'm not sure if it's because there are more cases, or if it's because people are more tuned in to what's going on," he says, citing the viral nature of Lynch's "Hurt Feelings Report" and Abel's rant. And he adds that the sexual abuse allegations against assistant football and basketball coaches at Penn State and Syracuse universities likely will affect the relationships between athletic administrators and coaches at all levels. "If anything good comes out of those situations, it will be that we now recognize we have to be more diligent with overseeing coaches."