How to Weed Out Trouble-Making High School Sports Fans

In a brief but volatile confrontation with a referee officiating his daughter's basketball game at Albuquerque, N.M.'s Volcano Vista High School in January, Paul Alfaro flung a vulgarity the official's way. 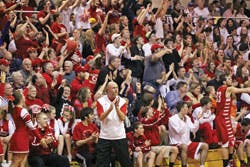 Reminding spectators of their responsibility to show respect toward the efforts of student-athletes, coaches, administrators and game officials should be a school's top priority. (AP Photo/The Daily Review, Chris Manning)

In a brief but volatile confrontation with a referee officiating his daughter's basketball game at Albuquerque, N.M.'s Volcano Vista High School in January, Paul Alfaro flung a vulgarity the official's way. That was enough for principal Shelly Green, a few days later, to justify banning Alfaro from all district property and functions for the rest of the school year - invoking a district policy that allows administrators to bar individuals if they present a threat.

Alfaro subsequently sued Albuquerque Public Schools and several district officials, seeking unspecified damages for the hardship of having to miss his daughter's games and other school events, as well as for his inability to pick up his daughter and other family members from school.

"This case is huge," says Jay Hammes, founder and president of after-school safety program provider Safe Sport Zone and lead athletic director for the Racine (Wis.) Unified School District. "If Alfaro wins, it's going to have an awful effect. Spectators at high school sporting events already have this sense of entitlement that continues to grow. And, really, it comes from parents' involvement in youth sports - maybe AAU, maybe club teams - and when they get to the high school level, they don't understand that sports are about education beyond the classroom."

Troublemakers don't have to be vocal, either. In late February, officials in Massachusetts mulled whether to replay a girls' high school hockey tournament game after it was discovered that an adult fan allegedly flashed a laser pointer at the opposing goalie.

"There's nothing that says somebody has the constitutional right to enter a venue where an athletic event is going on," says Alan Goldberger, a sports law attorney at the Millburn, N.J.-based firm Brown Moskowitz & Kallen. "And people don't have license to do whatever they want, just because they are in a sports venue - especially a high school venue where minors are involved." He adds that there is "ample precedent" for restricting the right of individuals to attend high school sporting events.

In the case most often cited, Watkins v. Louisiana High School Athletic Association, the Louisiana Court of Appeal in 1974 dismissed the lawsuit filed by Mrs. Edmond C. Watkins, who was banned by the LHSAA for one year from attending any athletic events involving Fenton High School. According to the complaint, Watkins confronted a basketball official and grabbed his arm immediately following a game. Her subsequent banishment, according to court documents, led to her being "humiliated" by the fact that principals of schools hosting Fenton teams were required to search the crowd before play began to ensure her absence. In dismissing the case, the appeals court agreed that the LHSAA's efforts to protect game officials were valid. That decision remains the gold standard for state high school associations acting to preserve a safe environment.

Goldberger also cites a more recent case, Marshall vs. Alabama High School Athletic Association, in which the Court of Civil Appeals of Alabama upheld a previous court's ruling that the state association was within its rights to ban Mitchell Marshall from all Montgomery Academy athletic contests. Marshall was accused of punching a referee in the face after a 1997 Montgomery Academy football game.

A wrinkle in Alfaro's lawsuit, as detailed in the Albuquerque Journal, may work against APS, Goldberger says. According to the suit, Alfaro became upset when his daughter and other Volcano Vista players were injured by members of the opposing team who were not reprimanded by game officials. He reportedly rose from his seat in the stands, and one of the referees allegedly began "taunting" him. "Where I come from, we train officials not to have any interaction with spectators," says Goldberger, who officiated high school and college basketball for 35 years. "Officials are not permitted - and any good officiating program will not permit officials - in any sport to have a conversation with spectators. Obviously, that will be wheeled out as a focal point in the Alfaro case."

To help create a welcoming and secure environment for all spectators, student-athletes, coaches and game officials, Hammes and Safe Sport Zone have partnered with the National Interscholastic Athletic Administrators Association and corporate sponsor American Family Insurance to create "$10 Safety Training" ­- a new initiative aimed at educating school administrators, faculty and other staff members working at athletic events about how to provide a reasonable standard of care at those events.

Taught by Hammes, the two-hour session (as its name suggests) costs $10 per person and focuses on the proper response to spectators who become belligerent, abusive or threatening. All participants (a minimum of 40 is required) receive a training manual and a certificate of completion. "Courts have consistently ruled that schools must provide a reasonable standard of care and safety for everyone attending an athletic event," Hammes says. "Having a certificate of attendance shows the initiative of having taken steps to prevent a situation from happening."

Attendees then are instructed to take information gleaned from "$10 Safety Training" back to coaches, who can share that information in preseason meetings with players and parents. Some of the largest school districts in the country have already been targeted by Safe Sport Zone, and Hammes hopes to expand "$10 Safety Training" to cover day-to-day in-school security operations and security in youth sports organizations.

Hammes, who distributed 15,000 posters to schools last summer reminding spectators that "Attending High School Sports Is a Privilege," is no stranger to unruly fans. In his role as AD, he has confronted many of them, and he prohibited a small group of Horlick High School parents and a former student from attending three basketball games this past season pending an investigation after they "created a ruckus" at another school that was captured on cell-phone video. "We had a meeting with each individual and hammered home that athletics is part of an educational program, similar to a classroom, and that disruptive behavior is not going to be tolerated," Hammes says. "We drew a line in the sand and said, 'If you cross it, you're not going to be able to watch your child participate.' We allowed them to come back, and they've been angels ever since. There have not been any other incidents."

Schools can manage risk and protect themselves in other ways, too. Goldberger suggests consulting the state association's code of conduct and making sure rules for spectators are communicated and enforced. Better yet, supplement that code with a school-specific one.

Also critical is ensuring that adequate security personnel is on hand at all events, and communicating to all spectators that violators of school codes or local laws will be dealt with appropriately. This requires, Goldberger stresses, complete buy-in from members of the administration, elected school board officials and local police.

Cooperation from fans helps, too. A handful of high schools are experimenting with short message service (SMS), in which spectators are asked to text details of misbehaving fans to a designated number posted in the venue. Similar to programs in place at college and professional venues, customized SMS programs allow districts to target problem areas in the stands and encourage spectators to police themselves - ultimately reducing the number of undesirable incidents.

"We're asking administrators to step up and confront people who are behaving badly," Hammes adds. "The courage to do that is really important right now."