Long considered a forbidden activity for individuals with concussions, cardiovascular exercise is slowly becoming recognized as a recovery tool. 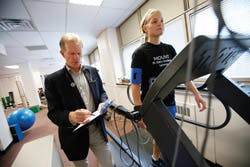 Long considered a forbidden activity for individuals with concussions, cardiovascular exercise is slowly becoming recognized as a recovery tool.

For that, you can thank physician John Leddy. As the director of the University at Buffalo's Concussion Management Clinic, where he also is an associate professor of orthopedics, family medicine and rehabilitation sciences, Leddy for the past five years has conducted research suggesting that supervised workouts on treadmills, stationary bikes, ellipticals or stair-steppers - performed for as little as 10 minutes at 80 percent of a patient's target heart rate - can help in the recovery process. He also claims a cardio workout provides a clearer indication than cognitive testing of when an athlete is ready to return to play.

"Everybody thought that doing something like this would make people worse, not better," says Leddy. "But it does make them better, because it's controlled. Fifty years ago, when doctors started doing stress tests on people with cardiac disease, people thought that would give them heart attacks. But the fact is, stress tests don't do that. And now those tests are done as a matter of routine."

If Leddy has his way, his exercise protocol for concussion patients will become routine, too, and he points to rehab clinics around the country that have already adopted some of his ideas. "It's okay, at some point, for people with concussions to begin exercising again, as long as they've seen a doctor and had testing done under medical supervision," he says. "As this catches on, you might see people in health clubs or fitness facilities who are actually doing this program and trying to recover from concussion symptoms."

For now, though, UB appears to be the only facility undertaking outcome-based studies in this area. That's why, in September, the university was among the 15 organizations to receive a sports-related medical research grant from NFL Charities to take the next step. Using the $100,000 grant, Leddy and Barry Willer, a UB professor of psychiatry and rehabilitation services, will spend this year assessing the fitness levels of student-athletes from several area colleges, plus members of the Buffalo Bills and the Buffalo Sabres, within hours of being diagnosed with a concussion.

"We haven't done early assessments like that yet," Leddy says. "But we think the physiology is different right after a concussion versus when someone is recovered. We want to see if the treadmill test is a good way to find out if there is a change in cerebral blood flow when they are symptomatic during exercise versus when they are not."

The 18-month study began in earnest in January and will include as many as 30 injured athletes and 30 healthy control subjects. The results, as Bills' executive vice president for strategic planning Mary Owens told UB Reporter, the University at Buffalo's online staff newspaper, "will benefit athletes at all levels."

"Replacing the conventional wisdom of long-term rest with a graduated exercise program may improve recovery in those with lingering concussion problems," acknowledges Stanley Herring, a member of the NFL Head, Neck and Spine Committee and a team physician with the Seattle Seahawks and the MLB's Seattle Mariners. "A study like this is important because it explores a potential treatment for athletes with persistent concussion symptoms."

Persistent concussion symptoms are those that linger for more than two or three weeks. Though they affect only a small percentage of concussed athletes, they are what got Leddy (also a doctor for UB athletic teams) thinking differently in the first place. "Why should these athletes be sitting around doing nothing? Why can't they do something, something that's controlled and safe?" he asks. "Physical rest beyond three weeks is detrimental."

So he asked student-athletes with lasting concussion symptoms to hop on a treadmill while he monitored such vitals as blood pressure and heart rate. Patients would exercise to the point where their symptoms - such as dizziness and headaches - increased, and Leddy would then stop the machine and establish 80 percent of whatever the patient's heart rate was at that moment as the new target heart rate for daily 20-minute workouts. After all, he reasoned, the individual had already proved he or she could exercise at that level without becoming symptomatic. For high-performance athletes, the target heart rate can be increased to 90 percent, while deconditioned individuals who suffer a concussion from an accident or other non-athletic incident may be prescribed a maximum of 10 or 15 minutes of exercise at 80 percent.

Leddy and Willer, who chose 80 percent arbitrarily, based their early research on similar studies (involving concussed rats) conducted at UCLA in the early 2000s. "What those studies told us was that maybe exercise isn't so bad; it's the timing that is important," Leddy says. "It's not just telling people to go out and do whatever they want. It's quantifying what they can do and building a rehab program around that information. Now, we tell patients to go to a gym and use a piece of equipment they like that doesn't involve a lot of bouncing and movement of the head. We want them to get an aerobic workout."

Leddy and his research colleagues also want to ensure their athletes are ready - really ready - to return to play. Cognitive baseline testing, they say, might not be the answer.

"Most people view concussion as a cognitive problem," Leddy says. "We view it as a physiological problem that has cognitive consequences. Therefore, what the NFL study may show is that doing a physiological stress, like exercise, is actually a better way to determine if someone has recovered than the cognitive testing that all sports teams use. We wanted something that is more representative of what athletes do on the field, and that is get their heart rate and blood pressure up. The real test for football players is to see if they suffer from any symptoms when they go back to hitting."

To that end, an obstacle course could be designed in a clinical setting involving participants running in a figure-eight pattern and then colliding with a heavy punching bag, as well as participating in a cardio test. "What I'm hoping is that someday, instead of using a computer test to determine if Michael Vick has recovered from a concussion, they'll put him on a treadmill. Or maybe they'll do both," Leddy says.

Still, some skeptics will need more convincing. Isn't it risky, they might ask, to take concussed patients to the brink of dangerous symptoms? "We've thought about that, for sure," Leddy concedes. "Do that to people, and they will get worse temporarily - for several minutes or several hours - but it doesn't last. At least with this, they're doing something active, and what happens right away is their reactive depression goes away. So if they can exercise and they have a goal, they automatically feel better. They make progress. They see an end point. The exercise is doing something physiologically, but also psychologically, to help them."

Michael Popke was managing editor of Athletic Business from 1999 to 2013.