'Baby Steps' in Diet and Exercise Help Get People Moving

You eat too much. You don't exercise enough. You're going to die ugly. How's that for uplifting lunchtime entertainment? Yet we keep getting asked back to speak with community groups and local employers to deliver that message. 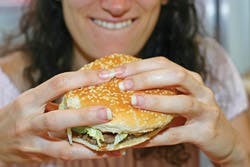 DROP THAT BURGER! The first steps toward helping people live healthier lives is telling them to eat less and walk more. (image DrRave/istockphoto.com)

The real message, of course, is that there is an easy antidote to our depressing diagnosis, which is "eat right and exercise." But people really don't want to hear that. They want a magic bullet, and they want that magic bullet to be just elusive enough so they can live in denial about their own health and wellness. After all, there's just nothing they can do, right?

So, we ramp it back. We make it so simple that it would be embarrassing not to make the changes we suggest. We're like anti-motivational speakers. We don't want them to reach for the stars, walk over hot coals or post a daily affirmation on their mirror. We don't even want them to join our gym. We just want them to eat a little less and go for a walk every day.

Many of our colleagues in the fitness industry would likely cringe if they heard our lunchtime talk. We think of the outrage that was caused years ago when the U.S. government included gardening as a form of exercise. There was great gnashing of teeth among fitness professionals at that suggestion. "Exercise," after all, is something that has to be done for at least 30 minutes at such-and-such a target heart rate and blah blah blah.

Remarkably, the general public agrees. They want exercise to be challenging and something that other people do. The masses see exercise as something they don't have time for, because the minimal standards are beyond their reach. It may be good for some people, but they're just not going to do it. That's okay, because there are lots of other things that fall into the category of things they're not going to do. Eight hours of sleep. Reading instead of watching TV. One beer instead of six. They know what they're doing and they don't care, and they are looking for every excuse to keep it up. They don't want to exercise and they don't want to eat right. Both seem complex and unattainable.

So, with regard to gardening as a form of exercise, we ask ourselves, "As fitness professionals, would we rather see people sitting on their sofas eating chips or working in their gardens?" Would we rather have them eat an entire deluxe pizza, or just a couple of slices? Would we rather have them not do anything physical because they can't walk briskly for 30 minutes, or have them take a leisurely stroll for 10 minutes if that's all they can or are willing to do? In every case, the latter option is the better answer. We believe that if we can convince our friends and neighbors to make slightly better choices every day, then we might actually do some good.

Our first message to our lunchtime crowds is to eat less. Getting their attention is key. Telling an audience at lunchtime that a serving of bread is just one slice causes some raised eyebrows and some lowered sandwiches. They also don't know that a serving of salad dressing is just two tablespoons. With those two simple observations, we have just made them realize that they are likely eating too much for lunch. We want them to understand that everything with food is about choices. We tell them, "Have six slices of bread and 12 tablespoons of salad dressing if that makes you happy," as long as they understand what they are doing and hopefully make trade-offs elsewhere. We strongly encourage our listeners to use websites like myfitnesspal.com and livestrong.com to understand what they are eating. If they make better choices, they can eat well, be healthier and still be happy. After all, sometimes happiness comes in the form of a box of Entenmann's chocolate chip cookies. We want you to be happy. We just don't want you to die tomorrow from a massive coronary.

But, despite what we say, we know that most people in our audiences won't want to think about what they are eating in any way, shape or form. So, we ask them to try this - eat half of whatever they might feel like eating. That's it. Just eat less. Make up a plate of food at every meal and then discard half of it. At a restaurant, ask for a doggie bag at the start of a meal, not at the end, and put aside half of the order. Maybe, just maybe, they could do that. Most won't, but maybe they'll get the point.

As for exercise, we try to keep it similarly simple and underachieving. We ask our listeners to walk for 30 minutes a day. The objections fly immediately.

"But I can only walk on my lunch break and I can't get sweaty at work." Then walk slower.

All we want them to do is to get off the path to adult-onset diabetes and heart disease. We want them to understand that there is a difference between doing something every day to be healthier versus "working out" to get "fit" and "lose weight." Nobody has ever told them that before or drawn the distinction. We don't want to let them off the hook by making "healthy" seem unachievable.

If they walk 30 minutes a day, they will, by the end of three weeks, control their blood sugar, reduce their blood pressure, sleep better at night, and have more energy. Will they then maybe want to do more? Walk faster? Walk longer? Run? Lift weights? Maybe, but for now we don't care. We can't set the bar any lower. We just want them to eat less than they eat now, and walk a little every day.

"Metabolism slows down every year after the age of 30. That's why we gain weight as we age." No, metabolism doesn't slow down nearly as much as people want to believe. It's a totally false cause and effect. We gain weight because we eat too much and get more sedentary as we get older.

"I know someone who joined a gym and after she started exercising she gained weight." She had to have started eating more. "No, she didn't. She just gained weight from the exercise." That's physiologically impossible. "It happened." Fine, we'll stop arguing.

"I don't have time to eat breakfast and lunch. I'm always on the go." Wake up 15 minutes earlier to make breakfast. Keep healthy snacks with you so you can eat a little throughout the day.

"My life is really busy." Oh, so you're the one. The one who is busier than the President of the United States. Even our presidents seem able to find an hour or so per day to exercise. We just want you to walk for 30 minutes.

So, we try. We ask them to set their expectations so low for themselves that they should be able to accomplish something. Most don't, but we have had our share of successes. We've had local businesses add healthier food options to their cafeterias. We've used these talks to motivate people to start or join walking clubs. We've even had a few listeners show up to become members of our gym and proudly share that they are off blood pressure medication.

Small victories. One lunchtime wakeup call at a time.