Pickleball's growing popularity can't be denied. Has your program given it a taste test?

Pickleball is one of - if not the - fastest growing sports in the country. Originally popularized by a Boomer population looking for something a little more exciting than bingo but less time-consuming than a round of golf, the sport has made a generational jump and is catching fire among people of all ages.

So what's standing in the way of parks and recreation programs looking to capitalize on this craze? The financial investment, though not negligible, is small. Existing gym space or tennis courts can do double duty as pickleball courts. From there, the USA Pickleball Association recommends a program have, at a minimum, a 34-inch-tall net, at least four pickleball paddles per court and a dozen balls per court. The minimum amount of space recommended for a court is 30 by 60 feet, or four pickleball courts per one standard tennis court. Outdoors, tennis courts can serve as a basis for the game, if communities aren't ready to invest in a dedicated space. Indoors, lines for pickleball can easily coexist with those for volleyball and basketball. 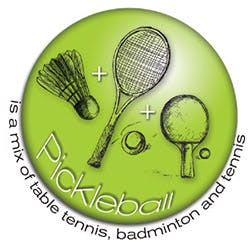 Despite the easy startup and the readily apparent fan base, pickleball programming is not without its obstacles. The Rockford (Ill.) Park District's plan to install pickleball courts was met with resistance from the very beginning. Dubbed the "Great Pickleball War of 2010," recreational tennis players rallied against the park district's plan to convert two tennis courts at two of its parks into pickleball courts, ultimately convincing the district to install the new courts in a third, bipartisan park.

Though the new location satisfied tennis enthusiasts, it didn't go over as well with neighbors of the park, who became increasingly annoyed with the ball's signature noise, eventually filing an injunction to put an end to the game. The sound was "like a hammer blow on a blacksmith's anvil" and "filters into every part of their property and household," neighbors of the park noted in the complaint.

Unlike the muffled pop of a tennis ball, the pickleball, a smaller version of the wiffle ball, makes a distinct and noticeable noise upon impact with the paddle - one that isn't always easy to ignore. "It's not so much the decibel level, but the repeated thwacking," one resident complained to the Green Valley (Ariz.) Recreation Board. "I think if something isn't done to the satisfaction of neighbors here, a lawsuit is what it'll come to."

And thus, like any other sport, starting up a pickleball program should be given its due diligence.

PLANTING THE SEED Key to starting a successful pickleball program is making room for it among established programs without making anyone feel like their program is being marginalized, as in the case of the Great Pickleball War. When its local pickleball association approached the City of Phoenix to ask if they would be willing to open up some space for the sport, the parks and recreation department started slowly, says deputy director Esther Avila, opening up just a couple of spaces at two of the city's recreation centers. "We used indoor badminton courts - your typical gym is striped for basketball, volleyball, badminton - and just used some of our open gym time in the morning. They had to get used to the multiple lines, but they liked it."

The arrangement has been working out well for everyone, having minimal impact on other programs while slowly exposing people to the new sport. "Had they requested a nighttime indoor facility, I think that would have been more difficult because of all of our classes and leagues," says Avila. "But because the timeframe was doable for us, it worked out."

The timeframe works well with pickleball's primary demographic, at least what it once was. "Seventy percent of USA Pickleball Association membership is 60 years old and up," says USAPA executive director Justin Maloof, adding that 24 percent fall into the 40-59 age range, and six percent under 39. "We don't think this represents a true cross-section of the pickleball population at large. There are thousands of children who play pickleball on a regular basis in physical education classes, afterschool programs, YMCAs, Boys and Girls Clubs, but they have no reason to join the USAPA so they don't factor into our age breakdown. That said, USAPA membership has doubled in the past three years." 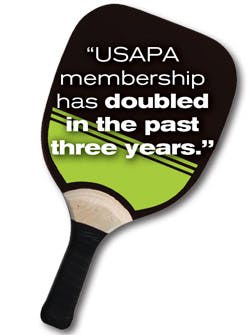 Avila anticipates seeing a growing demand for court time among other recreation users, as well. "Obviously it gets the attention of other people," she says. Luckily, pickleballers aren't an exclusive group. "The players include other people. They've done some clinics for us, as well, to introduce the sport to our youth."

And as a further testament to the game's cross-generational popularity, it will be included in the department's revamped youth sports programs, says Avila. "We're doing a big kickoff in November and pickleball will be one of the new activities we'll be showcasing."

ROOM TO GROW The USAPA also keeps a record of places to play pickleball across the country, offering perhaps a more telling glimpse of its growth. "At the end of January 2013, the USAPA documented 1,666 places to play, and by the end of July 2013, that number had increased to 1,900 places to play," says Maloff. "This equates to 39 new pickleball venues coming online each and every month throughout the United States." 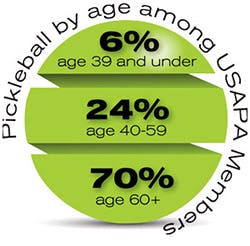 After seeing the success of its indoor courts, the Phoenix parks and recreation department is looking to expand its outdoor offerings. Adding permanent outdoor courts aren't as easy as adding lines to indoor courts, however. "We're working on it," says Avila. "That's literally revamping a tennis court. We have a couple of locations where we haven't modified the tennis courts, but have pickelball in addition to the tennis courts. They will be able to check out equipment and they would be able to play pickleball."

Less of an issue inside of a gymnasium where loud noise is the norm, installers of outdoor pickleball courts should be cognizant of how the game might interfere with neighbors and take proper precautions. Some communities limit the hours that the game can be played, others invest in trees or screens to muffle the noise. In Surprise, Ariz., the Sun City Grand Pickleball Club made peace with its neighbors by commissioning a sound study to determine which brands of paddles were most offensive to the ear, resulting in a list of approved paddles for use on its courts.

And if all else fails, get people to play a game. "The main thing is to engage your detractors in pickleball so they can experience the appeal of the game firsthand," says Jordan. "As others start playing, the mood organically begins to lighten up."