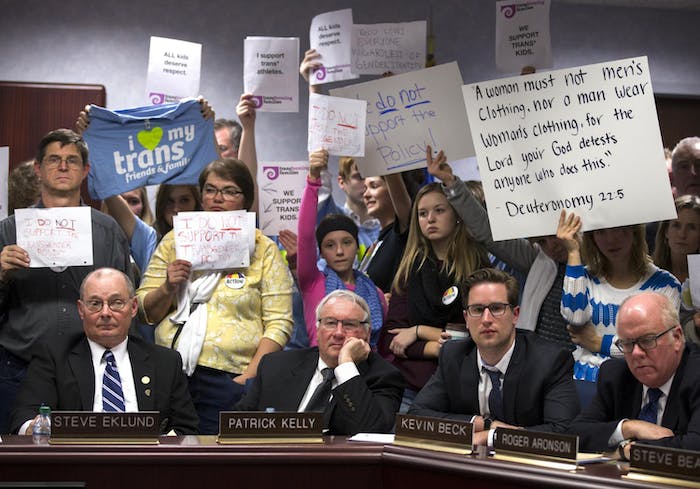 Following successful votes by their respective high school governing bodies, transgender student-athletes at high schools in Minnesota and Virginia will be able to participate in sports based on their identified gender.

"I applaud the Minnesota High School League's decision to pass a proposal that tells trans students in our community their identities matter just as much as everyone else's," said Congressman Keith Ellison in a written statement. "At a time when so many transgender students are bullied and harassed in the schoolyard, the MSHSL's decision recognizes their dignity and humanity on and off the playing field. All trans students are asking for is to be treated as human beings and I stand with them."

The policy has been getting a lot of attention in Minnesota over the past few months, delaying a vote initially planned for October after more than 10,000 emails were sent to league officials voicing opinions on the issue. Once again, supporters and opponents of the policy packed the meeting room for this week's vote, holding signs expressing their opinions. The new policy, approved by 18 of 20 board members, specifically addresses the participation of students born male but identifying as female participating in girls' sports, as state law already allows for girls' participation in boys' sports.

"We would not want to take away that privilege from anyone, but the answer is not to say that you should be given special privileges above and beyond everyone else," said Autumn Leva of the Minnesota Family Council, which submitted a petition with more than 5,000 signatures opposing the policy. "The answer isn't to say we're just going to completely ignore physical realities, especially in the world of physical sports."

The new policy in Virginia amends one passed by the Virginia High School League last February that included the requirement that students must undergo gender reassignment surgery before being allowed to play for a team matching their identified gender. The requirement was viewed as too strict and unobtainable, since reassignment surgery is rarely approved for those under the age of 18.

While the new policy removes this restriction, students must still meet a variety of criteria before their participation on a particular sports team is approved. Students must submit a personal statement affirming their gender identity, as well as testimonies from family or peers, and must demonstrate that they have begun some type of hormone therapy.

The materials must then be submitted to the VHSL district committee, which will review the materials and make a recommendation to VHSL’s executive director. If the request is approved, a student is immediately eligible to begin participating in a sport. If denied, a student can appeal the decision.

In Minnesota, students must submit statements from parents and healthcare professionals, leaving the decision up to the school's activities director, though appeals will be conducted by an independent party. The new policy will take effect beginning with the 2015-16 school year. Private schools will be exempt from the policy under state and federal law. The MHSL’s approval of the new policy brings the number of states with some type of policy addressing transgender student participation in high school activities to 33.