Three Public Recreation Projects You Might Not Have Considered

As new public recreation facilities in communities from coast to coast continue to open their doors, leaders in some locales might want to consider something a little different for their constituents.

For example, in Texas — where Dallas-based Brinkley Sargent Wiginton Architects prides itself in taking on out-of-the-ordinary design projects — publicly funded attractions such as an adventure camp, an indoor waterpark and a sister city aquatics center have proven popular among local residents and visitors alike.

If you’re looking to distinguish your community from surrounding municipalities when it comes to creating a recreation wonderland, the following three types of facilities just might give you some ideas:

In January, Epic Waters opened in Grand Prairie, Texas — sharing a site with BSW’s groundbreaking Summit Active Adult Center. The $88 million, 80,000-square-foot indoor waterpark with a retractable roof is a component of the “Epic” project designed by HKS Architects and offers plenty of superlatives — including the longest lazy river in Texas (more than 650 feet) and three first-of-their-kind waterslides..

Other elements include the Grand Lawn Amphitheater designed to accommodate from a couple hundred people up to 10,000 people; The Epic, a 128,000-square-foot facility with a gymnasium, fitness center, futsal court, adventure track and CrossFit area; and PlayGrand Adventure, which will be Texas’ largest all-inclusive playground when it opens later in 2018, with more than 250,000 visitors expected every year.

“When you would go to a rec center, you’d want to play volleyball or basketball or fitness of some sort, but this is much more,” Rick Herold, the city’s recreation director, told the Fort Worth Star-Telegram in January. “We’ll have a professional recording studio, opportunities for kids who are into dance [and] theater, or if they’re into culinary arts, they can learn there. It’s an incredible facility.”

No wonder Herold labeled the complex as “recreation reimagined.”

Collin County Adventure Camp in Westminster, Texas, was designed to bring outdoor learning experiences to area children, but adults can benefit, too. Residents passed a $26 million bond, which led to the establishment of this sprawling 400-acre site that includes an extensive trail system anchored to a central education building. When construction was complete in 2006, Collin County partnered with the YMCA of Metropolitan Dallas to manage the camp, which now uses the apt slogan, “Adventure is Our Middle Name.”

Built in the Texas blackland prairie region, which is renowned for its rich black soil, Collin County Adventure Camp accommodates children ages 5 to 14, and more than 16,000 students from 121 public, private and home schools attended camps in 2017. The camp also hosts adult groups, organizations and businesses for customized retreats.

Broad-reaching, public adventure camps are becoming more popular. The City of Berkeley, Calif., owns and operates Echo Lake Camp under a special-use permit with the U.S. Forest Service. The camp serves as the gateway to the immense Desolation Wilderness Area, which offers miles of hiking with a backdrop of alpine lakes, streams, peaks and meadows. A variety of programs cater to younger children, teenagers, families and even the 50-and-older crowd.

According to Sister Cities International — a nonprofit organization founded more than 60 years ago by U.S. President Dwight D. Eisenhower — a sister city relationship is a long-term, cooperative arrangement between two cities in different countries through which cultural, educational, business and technical exchanges take place.

So, when it came time for the City of Arlington, Texas, to build a new aquatic center, officials looked to Bad Königshofen (“King’s Bath” in German) for inspiration —  a small spa town in Bavaria that has been Arlington’s sister city since the early 1950s.

The design response was an agrarian theme, based in early German immigration to Texas.  Arlington’s Bad Königshofen Family Aquatic Center boasts a shallow-water play pool, a 25-meter four-lane swimming pool, a one-meter diving board, two water slides and a sprayground that doubles as a fountain during the offseason. Park attendance at the facility outpaces that of the city's other municipal pools combined. 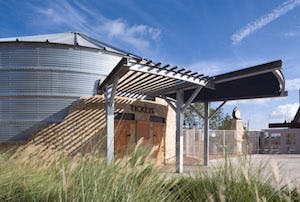 Other communities pay tribute to their sister cities through public recreation facilities, too. Philadelphia’s Sister Cities Park is located in the heart of downtown and adds a picturesque swath of green to the arts and cultural district. It celebrates Philly’s 11 sister cities in 10 countries (Cameroon, China, France, Germany, Israel, Italy, Japan, Korea, Poland and Russia) by featuring several sustainable design elements and a fountain with geyser-like spouts representing each country. The park is leased from Philadelphia’s Department of Parks and Recreation and managed and maintained by the Center City District.

Not only do each of these facilities reflect the way in which local officials thought well outside of the so-called box, but they also brilliantly fit the needs and character of their specific communities while also generating significant usage by non-residents.

What can you do to make your community stand out?