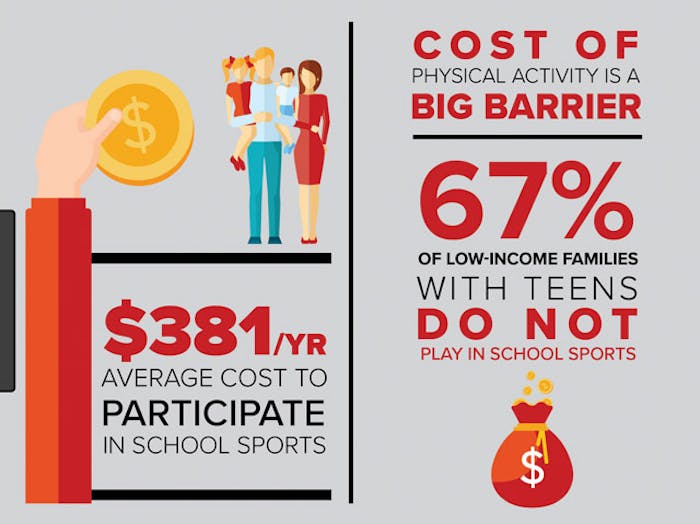 According to the 2018 Sports & Fitness Industry Association Topline Participation Report, during the period of 2012 to 2017, rates of inactivity among the poorest households (measured as those whose income is less than $25,000) has increased, while the opposite can be said of more affluent houses. As the SFIA puts it: "The affluent are getting more active while the less affluent are becoming more inactive."

Indeed, those households with the lowest income report inactivity rates of 42 percent, more than double the rate of households that earn $75,000 a year or more.

This kind of data begs the question: What might be causing the decline in activity rates for lower-income households? What might the fallout be for those individuals who find themselves unable to participate in physical activity? And what can the industry do to reverse the trend?

Barrier to entry
It may seem obvious, but being active doesn't come cheap. Whether it's purchasing one-off fitness classes, gym memberships or sports equipment — getting up and moving requires more than just a commitment to get fit. Even participation fees for youth sports can be too heavy a burden for many families. Being physically active is often an investment that many poorer households simply can't afford.

Cost is the first factor that SFIA CEO Tom Cove lists when it comes to causes of the inactivity epidemic among low-income communities, though he admits he didn't see that coming. "When the recession came, we thought sports participation would go up, because it's like people aren't going on Disney vacations, they're not going on cruises, they're not going to Europe," Cove says.

What actually took place, according to Cove and the SFIA data, was a kind of quadruple whammy. Individuals and families cut back on discretionary spending, but so did schools, community organizations and sports sponsors. "In the lower-income communities, it's like a tsunami," Cove says.

Belt-tightening is only part of the larger problem. Neighborhood inequities — such as poor institutional investment in creating access to sports, or a lack of transportation options — can compound the problem. If a community lacks things like safe parks or bus transit to the local recreation center, citizens may find it difficult to access even low-cost options for physical activity. And as Cove points out, these problems exist in low-income communities across the country, spanning the rural-urban divide.

The costs of inactivity
The individual consequences of inactivity (lower-quality sleep and overall health, even substandard academic performance) are well known and at scale can have massive consequences for society — for example, if a large portion of the population is obese, it increases the burden on the healthcare system and increases costs. But Cove argues that the consequences of rising inactivity levels among lower-income communities could impact the sports and fitness industries, as well. An inactive population, particularly among youths, spells trouble down the line.

"The activity measure is the foundation of the next 30 years of sport in America," he says. "Our business is based on getting kids access to sports across the board, and through the course of their childhood, early adulthood and then even adulthood, they remain active in a variety of ways and they buy our stuff. It's not very complicated."

Cove says that the "business imperative" begins with getting people active and involved at an early age. Sports are a great way to get youths involved, and as those children grow into adulthood and age out of certain activities, they pick up other activities — provided they've grown up with an active lifestyle. "Our data are really clear," he says. "If you don't have physical literacy at an early age, and if you don't have opportunities in mid-childhood/pre-teens to have fun — if you can't run, jump, catch, slide, dodge, move your body — you're not going to be very good at most things in sports. So therefore, you're not going to enjoy it that much, and all of a sudden you've got a cycle of people saying, 'Oh, I don't sweat, that's not me, I play video games.' And that's the long term."

Businesses across the industry have had to deal with making difficult choices in a tough environment. "We all have suffered from the challenges of retail disruption and consolidation and other kinds of competition for both discretionary time and dollars," Cove says. "But you have to be honest about the fact that activity programs, especially for younger kids, pay off in the long term."

What we can do
Though the inactivity data the SFIA compiled is alarming, there are things that can be done to reverse the trend and set all populations on a course toward a more active, healthful future.

The SFIA has long advocated for the PHIT Act, otherwise known as the Personal Health Investment Today Act. PHIT would provide Americans with incentives to increase their activity levels, as well as reduce costs, by allowing them to use pre-tax medical accounts such as HSAs and FSAs on activity-related expenses.

But in addition to legislation, individual organizations can take steps to engage low-income communities. Cove cites initiatives such as Play Ball, a partnership between MLB and USA Baseball, that seeks to spark widespread participation in baseball across all age groups, but especially among youths. "Just putting a ball and a bat and a glove in kids' hands, and not saying you've got to wear a uniform and you've got to play on a team and you've got to have an umpire. No, you just get to go out there and hit," Cove says of the program. "Does it make an actual baseball player? No. It just exposes you to baseball."

The program may be having some effect, as baseball is among the sports seeing the most growth in participation, according to SFIA data.

Apart from programs intended to bring sports to youths, the United States Olympic Committee and its National Governing Bodies have turned to a program called the American Development Model, which seeks to keep young athletes involved and having fun with sports as they grow and learn the game.

Eliminating or lowering barriers for volunteer youth coaches could also pay dividends for lower-income families. Cove suggests removing fees for volunteer coaching classes and background checks as a way to get those with tight family budgets into coaching.

Finally, Cove's largest prescription for engaging youths in healthy lifestyles and reducing inactivity levels: bring physical education back to public schools. "You take P.E. out of schools and in a lot of places, there aren't other opportunities," he says. "Then they're really on track toward inactive teen years, and then almost for sure after that, an inactive adult life.

"If I were king, that would be the thing I would do, and you would see the health of this country change."

The inactivity rate among the poorest households is an ugly truth, but the industry can't afford to turn away from these communities. In addition to calling it "a moral issue," Cove believes leaving these communities behind could have disastrous results for decades to come.

"It's a big ship to turn," he says. "It's a matter of taking it to scale. It's a matter of really understanding how we can take good people, good money and good best practices to a much broader application in America. That's the critical factor for us. We've got a lot of work to do, but we're all working hard on it — so I'm hopeful."

This article originally appeared in the June 2018 issue of Athletic Business with the title "How to curb the low-income inactivity epidemic." Athletic Business is a free magazine for professionals in the athletic, fitness and recreation industry. Click here to subscribe.