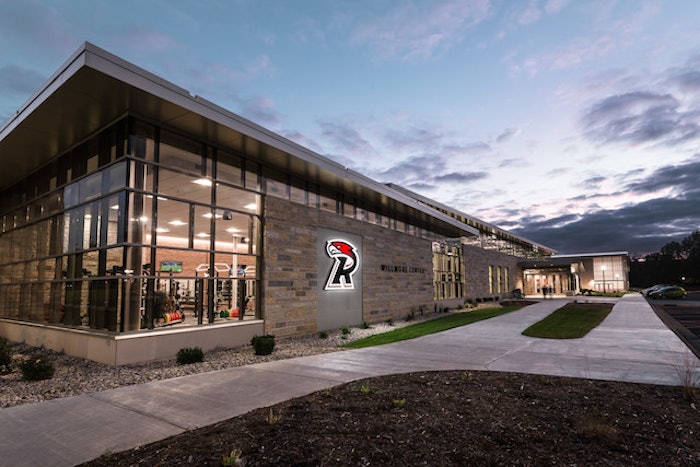 When Ripon College began planning a major upgrade of its primary athletics, health and wellness center, the vision went much further than having a bigger, newer facility. They wanted the building to be a new hub of activity on campus – not just on game days, but every day. They wanted it to be a source of pride for the 800-student private liberal arts college and the community of Ripon, Wisconsin. More ambitious yet, they wanted it to be a recruiting magnet, attracting both athletes and non-athletes.

The Willmore Center opened in August 2017 with a new 65,000-square-foot field house and an additional 100,000 square feet of new or renovated space. It is already achieving its mission.

And with a cost of $23.5 million, the project is an example of how such results can be achieved on a modest budget.

The Willmore Center is the main athletics, health and wellness center for Ripon College students, faculty and staff. It is the home of the Red Hawks NCAA Division III athletics program; the basketball, volleyball, swimming and diving, tennis, track and field, and dance teams train and compete there and the football, soccer, baseball, softball, cross country and cycling teams use the training, locker and office spaces. It houses the college’s baccalaureate program in exercise science. Ripon residents purchase memberships to use the facility for their own workouts and partnerships have been developed with the local hospital to use the facility for therapy. The college and community organizations frequently host events in the building.

After 50 years of service, the college’s existing facility had become vastly undersized, had begun showing its age, and lacked many of the amenities that today’s students expect. Economics dictated renovating and expanding the existing structure, rather than building an all-new facility.

Much of the original 1967 structure was retained, but the layout, design and environmental branding make the Willmore Center feel like a newly built facility. The existing Doc Weiske ’50 Memorial Gymnasium and Kohler Swimming Pool natatorium served as the Willmore Center’s foundation, with much of the new space concentrated on the building’s north side to showcase and take advantage of them in ways that the previous facility did not and create the desired “WOW!” factor upon entering the building.

To attract athletic recruits, the Willmore Center offers size, facilities and amenities typically only found at much larger schools. It also demonstrates to other prospective first-year students the value that Ripon College places on supporting the wellbeing of everyone on campus.

“It has such a great layout and is visually very engaging for recruits and their parents alike,” said Athletic Director Julie Johnson. “Many recruits tell us that it’s the nicest facility they’ve seen during their recruiting visits.”

“Students, and those considering becoming Red Hawks, love that the building is not just for athletes, but for all students,” added Vice President for Enrollment Jennifer Machacek. “They value health and wellness and are excited to see that this building offers all students opportunities to use it.” 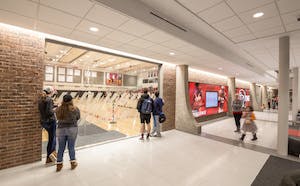 The new Willmore Center is a facility not just for student-athletes, but for the entire campus community.

The Field House is a feature that many of Ripon College’s peer schools do not have, setting the college apart with athletic recruits and drawing in other users from around campus and the community. The facility includes a 200-meter, NCAA-regulation indoor track with 60-meter straightaways; areas for jump and field events; four performance courts with netting for competition basketball, volleyball and tennis; and two batting cages. Diffused natural light floods into the space through a translucent wall panel system, creating a bright, inviting atmosphere that is not found in most similar facilities, even at NCAA Division I schools.

For the college’s spring sports programs, the indoor space mitigates a significant challenge – Wisconsin weather, with the cold, rain (and, often, snow) that March and April bring. The tennis teams now hold many of their home meets indoors. The track and field teams now host early-season meets indoors while waiting for the outdoor portion of the season. Baseball and softball practices can be moved inside in inclement weather. All spring sports athletes appreciate having the indoor space available for training during the long winters.

The Field House is also popular with non-athletes, with students, faculty, staff and Willmore Center members going there to run and walk, play tennis year-round and play intramural volleyball.

The Fitness Center was more than doubled in size and now features a 6,000-square-foot weight room and the 2,000-square-foot Hopp-Gonring Cardio Balcony. The additional room and equipment enable non-athletes and community members to access the equipment – something that was nearly impossible before as the space was consistently in use by athletes.

That opportunity benefits students’ social well-being as much as their physical health, said Vice President and Dean of Students Christophor Ogle. “It allows students to socialize around physical activity, which is both healthy and another outcome of what we sell as the close interpersonal nature of a private liberal arts education,” he explained.

College officials give partial credit to the Fitness Center and the addition of the new Agnesian Healthcare Athletic Training Center for helping nearly double the school’s number of football recruits. Another feature not offered by many peer schools, the athletic training center supports the training and physical therapy needs of all students, faculty and staff. It is staffed by two certified athletic trainers in partnership with Agnesian Healthcare (now part of SSM Health), as well as a host of student assistants, and features a private exam room, numerous exam stations, a full-size soak tub, and a rehab area.

In addition, the Field House gives Ripon College the ability to host high school basketball and tennis tournaments and track and field meets, creating opportunities for potential students (athletes and non-athletes) and their parents to visit campus. A recent track meet drew 844 athletes from 53 high schools, along with 812 spectators.

Several key areas of the original building – spaces that still functioned well and, given their size and infrastructure needs, would have been costly to replace – were retained and updated. These included the Weiske gymnasium, the natatorium, a large fitness studio and the locker rooms.

Punched glass openings on the ground and upper levels of the gymnasium connect it to the building’s atrium, allowing fans to instantly feel the game-time excitement upon entering the Willmore Center, or even watch part of the game from the atrium. The gym also received a new floor and bleachers.

The existing fitness studio and one of two new fitness studios were equipped with Wellbeats™ virtual fitness training programming.

The feature of the Willmore Center that most catches recruits’ eyes may not, however, be a performance or training facility. It may instead be the very first thing they experience when they walk through the door.

According to Johnson, the athletic director, the atrium is the area most often cited by the college’s student athletes as their favorite feature of the building. “It’s a place where they can gather to study, work on projects together, and just relax with friends,” she said.

It has, in fact, become a hub of social life at Ripon College. Located on the opposite end of campus from the student union, it serves as a second commons where students can hang out between classes or before or after a workout when it is not convenient to return to upper campus.

Natural light streams in through the expansive windows on the ground and second floors. The bright, open atmosphere is enhanced by the space’s generous size (4,200 square feet) and two-story ceiling.

The lounge area is situated immediately to the right of the welcome desk. Comfortable seating invites lingering to read or chat with friends. Large high-boy tables are nearly always filled with students studying. The self-service Micro Market offers a variety of beverage options as well as quick salads, sandwiches and snacks.

As important as the individual features and amenities are to the Willmore Center’s success is how they are connected and revealed by the facility’s layout and design.

In stark contrast to the previous windowless “box,” the Willmore Center is open and bright. Glazing on the building’s entire north face brings the outdoors inside during the day and offers views into the building after dark. Extensive use of glass, punched glass holes and translucent panes carry the natural light into the interior spaces.

Rather than tucking performance areas – such as the weight room and pool – behind closed doors at the ends of dimly lit corridors, the Willmore Center prominently displays them to market the range of activities that are available. Standing in the atrium, several different wellness activities can be seen taking place at once – front and center in the Weiske gym, in the cardio balcony stretching overhead, and in the Fitness Center weight room to the left. The athletic training center is adjacent to the gymnasium, a visible location chosen to serve as a continual reminder to athletes of the services offered there.

Much of the exterior structure of the previous facility now forms interior walls of Willmore Center. The beautiful brick walls and concrete columns from the 1967 building are interspersed with new glass to create paths guiding visitors through the facility and revealing the spaces within.

The brick and concrete also pay homage to the original facility, which was a showpiece on campus when built.

Environmental branding combines high-tech and low-tech solutions to further celebrate the history of Red Hawks athletics. When entering the facility, the emphasis is on the student athletes. Photos of student athletes adorn the walls and the front desk reminds all visitors of the college’s slogan, “Life Well Lived®.” The Hall of Fame is displayed via a digital touch screen – a more engaging and interactive alternative to the usual plaques. Three-dimensional displays with mannequins showcase uniforms worn by Red Hawks teams throughout the years. Simple vinyl banners hung along the hallways work with the building’s rhythmic structure, making a big, yet highly cost-effective, impact.

The Willmore Center also is helping strengthen the connection between the college and the community.

“The interaction occurring between students and local people who frequent the facility to work out is very valuable,” said Ogle, the dean of students. “It contributes to the ‘town-gown’ relationship that we strive to maintain.”

“It has been both exciting and a great sign of potential future use,” Ogle said.

And if further evidence is needed of the pride that Ripon College has in the Willmore Center, or the impact that the facility is having, the admissions office has moved many of its events to the facility to showcase it, and registration for this summer’s orientation program for first-year students took place there, making it the site of the first on-campus experience for the newest Red Hawks and their families.

Adam Bastjan, AIA, LEED AP BD+C is an associate principal at architecture and design firm Kahler Slater (www.kahlerslater.com), working with the firm’s sports and recreation team. He can be reached at abastjan@kahlerslater.com.