Collegiate athletic directors have plenty on their plate under normal circumstances. Pile on a pandemic-induced shutdown of collegiate athletics as we knew it, and you have a recipe for unprecedented stress on the entire system and the individuals entrusted with it.

We didn't have a national emergency on our minds when AB surveyed more than 100 representatives from athletic departments across the country earlier this year, but we found that their professional attention is already pulled in multiple directions. Here are some key takeaways:

A majority (56 percent) of our sample are administrators representing departments with annual budgets of less than $5 million, but each of the five additional categories offered, all the way up to $200 million or more, claimed at least two respondents.

The athletic departments represented by our sample range in size from 50 student-athletes to 1,500, with an average of 422. Though only slightly more than half (54 percent) of respondents represent schools that sponsor football, it's no surprise that football is the top revenue-generator among the vast majority of those who do — 46 schools, in fact. Men's basketball is the bread-winner at 36 schools, including seven schools where basketball out-earns football. Forty percent of respondents have seen student attendance increase for its top revenue-generating sport, while 27 percent have witnessed a decrease.

Nearly every school in our sample (95 percent) sponsors varsity men's basketball, with nearly as many (94 percent) offering women's basketball. Women's sports also garnered the next two highest percentages in terms of sponsorship, with women's volleyball identified by 89 percent and women's soccer by 88 percent. Among individual sports for which men's and women's team options were offered by our survey, basketball is the only one to favor male sponsorship. Women's teams are offered by a higher percentage of schools in seven sports — soccer, volleyball, tennis, lacrosse, gymnastics, rowing and water polo.

Given that data, as well as the fact that 11 percent of respondents admitted their department had been involved in a Title IX lawsuit within the past 10 years, it's not surprising that gender equity is considered the most important program-related issue by our sample, followed by student-athlete transfer rules and sexual assault allegations. Transgender inclusion ranked least important among the six issues presented.

Yet, Title IX ranked third on a list of reasons schools added (46 percent) or eliminated (17 percent) sports within the past three years. That top three is led by changes in budget (40 percent), followed by changes in student-athlete interest (33 percent) and Title IX compliance (24 percent).

We also presented our sample with five student-athlete issues. Interestingly, three of them —academic support, mental health, and injury prevention and care — were given nearly identical weight in terms of importance. Ranking far lower were student-athlete drug use and student-athlete compensation.

In addition, we asked several facility-specific questions. While academics are a high priority, only 31 percent of respondents offer dedicated student-athlete academic facilities. Only player lounges (29 percent) and athlete-only dining (8 percent) ranked lower in terms of facilities offered for the exclusive use of varsity student-athletes. Locker rooms (92 percent), weight rooms (68 percent) and practice/training spaces (58 percent) set the pace in this category.

When asked to compare their athletics facilities to peer institutions, more respondents characterized theirs as subpar than superior — 38 percent to 20 percent. That may be driving the fact that a full 71 percent of our sample indicated plans to build or renovate athletic facilities within the next three years. 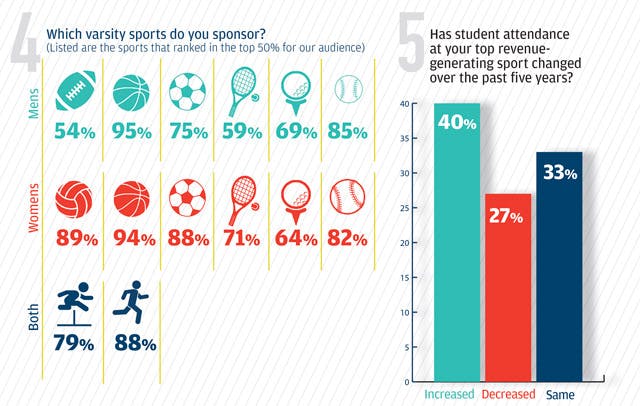 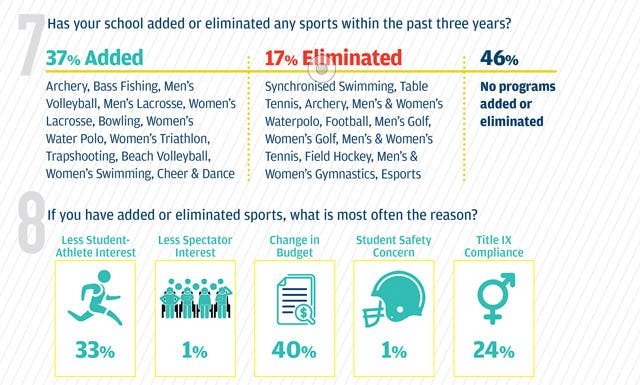 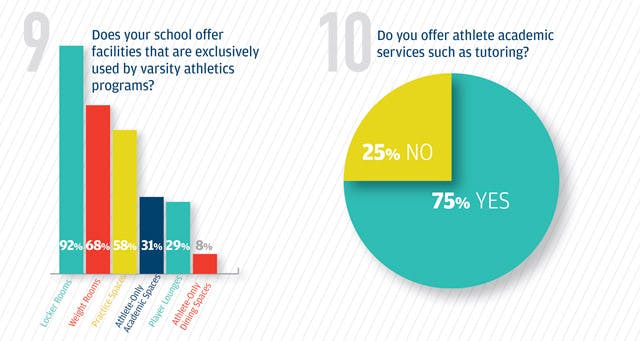 This article originally appeared in the May 2020 issue of Athletic Business with the title "AB's 2020 College athletics survey results." Athletic Business is a free magazine for professionals in the athletic, fitness and recreation industry. Click here to subscribe.