The University of Rhode Island announced that it had received a $3 million gift to support the improvement of the school’s men’s and women’s basketball training facilities. The gift is the largest piece of the $8 million plan, which will see URI’s West Gymnasium transform into a practice facility that will provide student-athletes with a dedicated practice facility. Currently, the programs practice at the Thomas M. Ryan Center, and have to coordinate practice times with a schedule of concerts and community events. The new facility will provide student-athletes with 24-hour access. — Today.URI.edu

A first look at the future basketball practice facility after it was announced that a $3 million gift from Stefan Soloviev and his family will enhance the $8 million project to renovate West Gym of the Tootell Athletic Complex. @RhodyMBB @RhodyWBB

.@HokiesFB has got some new digs

The University of Alabama announced it had secured a $500,000 commitment from donors to help fund the construction of a new tennis facility located near the Student Recreation Center. The facility will serve the school’s wheelchair tennis and University Recreation programs. The 5,400-square-foot Parker-Haun Tennis Facility will be the only facility in the country focused on serving adapted student-athletes, and will include locker rooms, a trainer’s room, restrooms, water stations and offices for coaching staff as well as amenities for University Recreation student and non-student members that include member services and secured access to the UREC tennis courts. — News.UA.edu

TIDE FANS! The University of Alabama will house the first collegiate wheelchair tennis facility for adapted athletes! This is a rendering of the new Parker-Haun Tennis Facility. We are so excited for our athletes!https://t.co/OHO1AVjLXB pic.twitter.com/OMrec62BbS

Sacred Heart University is scheduled to hold a groundbreaking Monday for its 22,158-square-foot, 3,600-seat ice hockey arena. The $70 million project, developed via a collaboration between JLG Architects and The SLAM Collaborative, will feature the latest technology in ice facility management, strength and conditioning training suites, a rapid shot puck room with synthetic ice, team locker rooms, player lounges, a pro shop, concession stands and more. The arena is scheduled to be operational by January 2023. 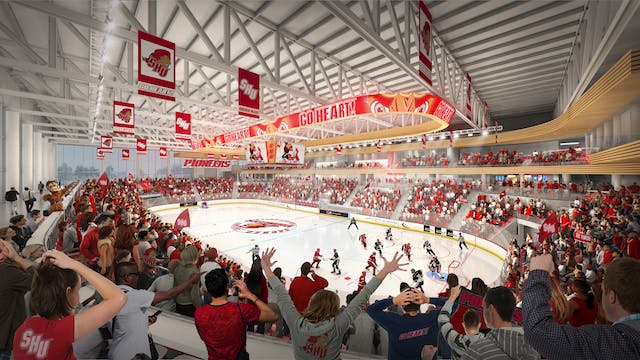