Functional fitness is a term that has been attached to a number of trends (think CrossFit) and products (TRX) in recent years. While high-intensity workouts and low-tech equipment might help improve one's functional abilities in everyday life, the term functional fitness is understood by trainers in relatively specific terms, with goals that are much more holistic in nature than simply getting strong, improving flexibility or losing weight.

The general public's view of fitness is constantly evolving. In the 1980s and '90s, most people were hitting the gym either to lose weight, build muscle or increase cardio stamina. The group fitness ideal looked like Jane Fonda, and the weightlifting ideal looked like Arnold Schwarzenegger.

Today's gym-goers, however, are arguably more sophisticated, arriving at the club with a wealth of knowledge and a spectrum of goals as diverse as it is difficult to serve. Today's club operators need to meet the demands of this new population of exercisers who may be working toward goals for which progress — increased flexibility, improved quality of life or simply aging without groaning every time they have to bend over to tie their shoes — is hard to define and track. Here's a look at how some in the industry are working to provide their clients with a more functional, individualized and holistic approach to fitness and wellbeing.

What is functional fitness?
"For me, functional fitness is about helping people to become physically whole again when it comes to movement," says Chris Gagliardi, scientific content creator for the American Council on Exercise. "That's something clients will say to trainers often, 'I want to be able to function and for things to be easier. I want to move more efficiently.' And all of this kind of gets grouped into that term functional fitness."

How results are measured in the functional fitness realm can also be more nuanced than bicep circumference or waist size. Says Gagliardi, "It has to do with being able to carry out the activities of daily living. So, if there was an activity — for example, sitting down and getting up from a chair — that was challenging for someone, and that becomes easier or less painful, or they can do it with more confidence, then that becomes a measure of success."

That's not to say that losing weight or getting stronger aren't a part of functional fitness, but they're only aspects of the overall picture. Each client may have very individual goals — relief from a sore back, the ability to walk without pain — that they see as important. It's the trainer's responsibility to assess those goals and come up with a plan for helping the client reach them.

"I really believe it's a matter of listening to the client and asking questions to identify what they really mean, and what they mean by becoming more functionally fit," Gaglardi says, "because it can mean such different things to different people."

From gym to everyday life
As the director of fitness at Lynx Fitness in Boston, Andrew Jackson has worked to provide clients with individualized plans that address their specific needs, as well as to employ trainers who understand the complex needs of today's exercisers.

"We've really tried to seek out coaches who have a more developed mindset and have experience in learning from clients. They understand that the idea of mobility, the idea of flexibility, goes far beyond being able to touch our toes," Jackson says. "We have folks getting into thoughtful mindsets around affecting your nervous system, which then can improve the ability to take new movement patterns into the body. But then we're also working with strength, working with cardiovascular conditioning. It's a very holistic approach when we finally get folks to move into our personal training program."

That holistic approach is increasingly something that the average gym-goer is actively seeking out. When Jackson started at Equinox in 2009, he saw the traditional strength/cardio dichotomy was strong in Boston, a city that hosts an internationally acclaimed marathon. In recent years, however, he has seen younger clients with more nontraditional fitness goals.

"We're starting to see more 25- and 30-year-old customers and clients asking for those holistic or functional types of program models and education, as opposed to, 'Hey, I want to have a six-pack. Hey, I'm getting ready for the beach,' " says Jackson, noting that trends such as CrossFit and obstacle course races, which gained popularity in the mid-2000s, were important in that they introduced people to many different types of intense exercise, allowing them to experience things that more traditional fitness modalities wouldn't have allowed for. "We're starting to see more folks have a broader mindset about what their options are because they've done a really intense CrossFit class or a Tough Mudder event. Now, having experienced those things, they're able to say, 'I don't want to be a bodybuilder, I don't want to be an endurance athlete, I don't necessarily have the interest to push very hard like a CrossFit workout.' And we try to answer that with, 'Well, what do you want to feel like when you're 50? What do you want to feel like when you're 60?' "

Jackson's definition of functional training is similar to Gagliardi's, but he notes that the crux of it for him, and increasingly for his clients, is ensuring that everything done in the gym can translate to practical settings in one's life.

"If you can't relate what you're doing in the gym to how you apply it to when you're not in a gym," he says, "it might not be functional."

Quality of life
Alison Katschkowksy has worked in the fitness industry for 30 years, only recently founding CU Fitness, a smaller club that primarily works with adults older than 40.

"Most of our people are in midlife, so function is purpose," says Katschkowsky. "By the time people get to me, they've usually tried half a dozen other things, haven't really gotten results and are looking for something that's really simple that they can easily implement into their life and stick to."

Katschkowsky's philosophy is rooted in seven basic body movements that are used in everyday life and come naturally to everyone.

"Everything that we teach is based on those seven basic moves, because the human body is created to move," she says. "We're not created to sit still and sit behind a computer. The more we focus on making those moves work better, not only does your fitness journey become a lot more meaningful and simpler, but we find that the actual workout itself is a lot easier to focus on because it's not like you're learning a second language."

Perhaps the hardest part for any trainer lies in identifying exactly what the client wants to achieve. In many cases, this might mean addressing the problem with traditional methods.

Katschkowsky values both the subjective baseline assessment — how a client feels when they come to her — as well as the objective assessment — body measurements and how the client performs various exercises. But she says the objective portion is similar to going to the doctor's office and having tests done, noting that those results are just a small piece of the puzzle.

"The subjective assessment is really important to me. I say, 'Tell me what you're really good at and what you want to improve. Tell me on a scale of 1 to 10 where you think you are fitness-wise,' " she explains. "I like the objective stuff — the numbers, the data — but it's really only one part of the problem with people. It's so much about mindset and getting people to change their thought patterns and to really assess what fitness means to them." 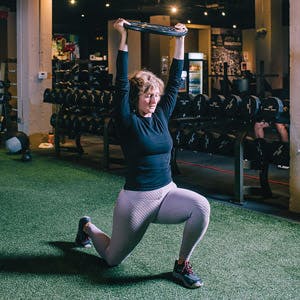 Tracking results
Results are one of the most important aspects of any fitness program, as is evidenced by the popularity of wearables, which can track an individual's progress over time, offering the exerciser insights and motivation.

At Lynx, Jackson says his brand of functional fitness goes beyond just being able to more efficiently perform daily tasks, evolving to address the whole person and their overall health. "We're starting to put pressure on our clients to go back to their doctor and have their physical, have their blood work done. And let's see what changes we can make on the inside of the body and not just looking at you from the outside."

To that end, Lynx has partnered with a local concierge doctor who prescribes fitness as a remedy based on diagnostics. "He's really interested in preventive medicine and incorporating sound exercise practices into his patients," says Jackson. "He's actually stimulated by that because he used to be a trainer and an athlete and so having that type of relationship is really great for our clients."

What does this type of relationship look like in practice? Jackson describes a client who came to him wanting to alleviate knee pain and lose weight. The client eventually lost 15 pounds but got frustrated when he plateaued.

In the long run, both Jackson and Katschkowsky say they see people just beginning to think of fitness as a very real form of preventive medicine that may be more effective than pharmaceutical intervention. They both agree that the COVID-19 pandemic has acted as a catalyst, forcing people to think differently about how, when, where and why they exercise.

The U.S. population has long been fed what ideal fitness should look like through TV and other media, but those perceptions are changing — as is people's understanding of everyday functionality and how to go about enhancing it. Says Jackson, "People are really beginning to break out of this tight little shell of what they think exercise is."

This article originally appeared in the April 2021 issue of Athletic Business with the title "How to meet client demand for holistic functional fitness." Athletic Business is a free magazine for professionals in the athletic, fitness and recreation industry. Click here to subscribe.