It may be too soon to fully assess the total fallout from a yearslong global pandemic — one that brought new challenges to the already difficult task of running a collegiate athletics department. From sports cuts and reinstatements, to name, image and likeness red tape, to the debate over the competition rights of transgender athletes, these are truly unprecedented times.

Athletic Business surveyed collegiate athletic departments at all levels of competition earlier this year to gauge current sports sponsorship and program support. Here’s a summary of what we found:

Our sample includes departments representing members of the NCAA (60.5 percent), NAIA (15.8), NJCAA (15.8) and USCCA (7.9). Regardless of affiliation, nearly half of all survey respondents have a “somewhat positive” overall view of their school’s athletics association. Our survey indicates that schools are just as likely to be “neutral” on this question as “very positive,” with roughly a quarter of respondents taking either of those positions. Only 5 percent admit to having a “somewhat negative” view and none reported a “very negative” view. 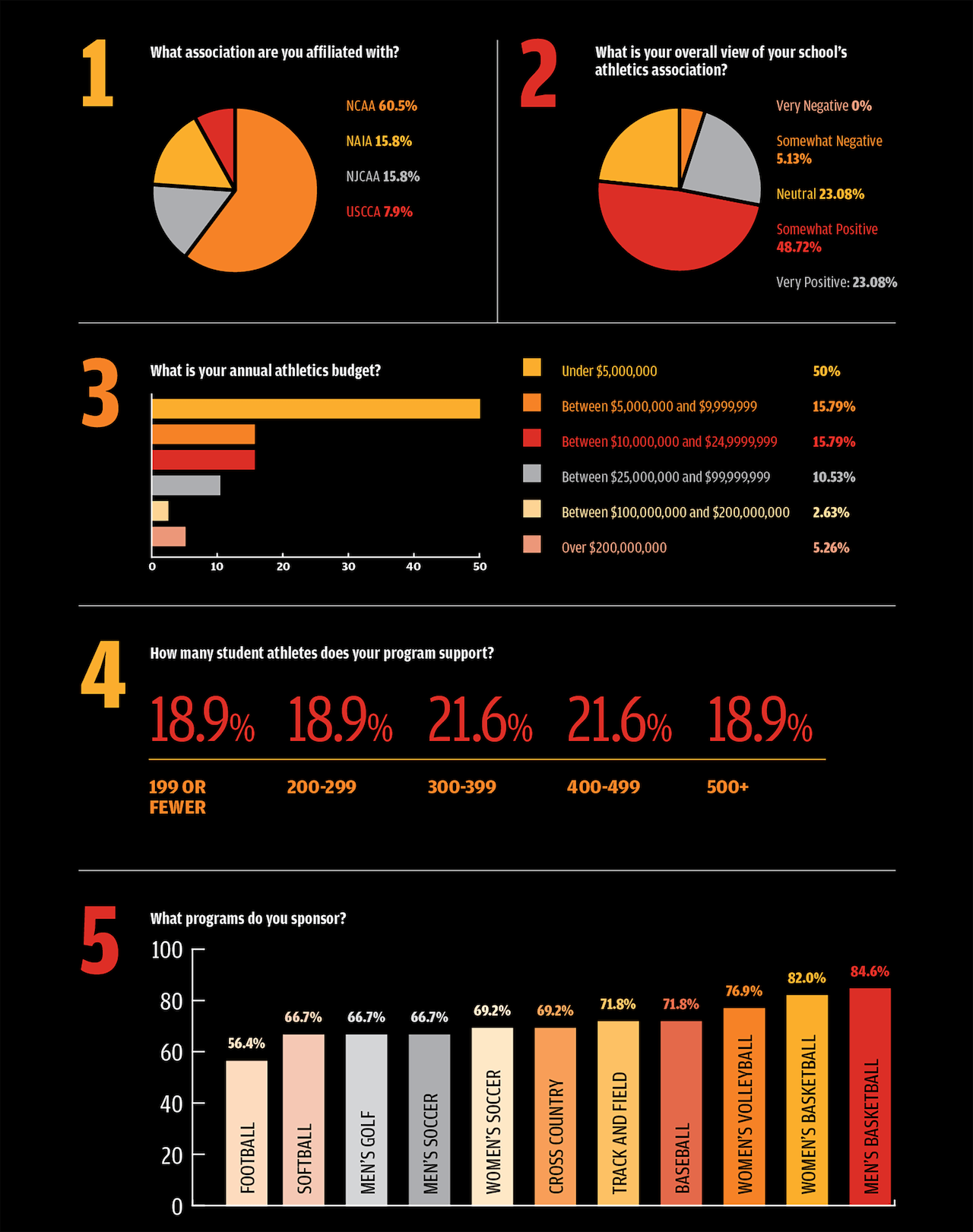 About 21.6 percent of our sample departments support between 300 and 399 student-athletes, the same percentage as those that accommodate 400 to 499. Nearly 19 percent fall in each of following categories: 199 or fewer, 200 to 299, or 500 or more. The average student-athlete total for the sample stands at 357.

Half our sample has seen no change in sports sponsorship over the past three years. However, nearly twice as many schools (32.5 percent) report adding sports compared to those who eliminated one or more (17.5). Looking to the next three years, 37.5 percent of respondents plan to add at least one sport while only 2.5 percent anticipate making cuts. When changes are made, it’s not necessarily driven by Title IX compliance, which at 22.6 percent of responses ranks third on our list of reasons behind changes in student-athlete interest (35.5) and changes in budget (32.3). That said, a full quarter of respondents report having been involved in a Title IX lawsuit within the past 10 years. 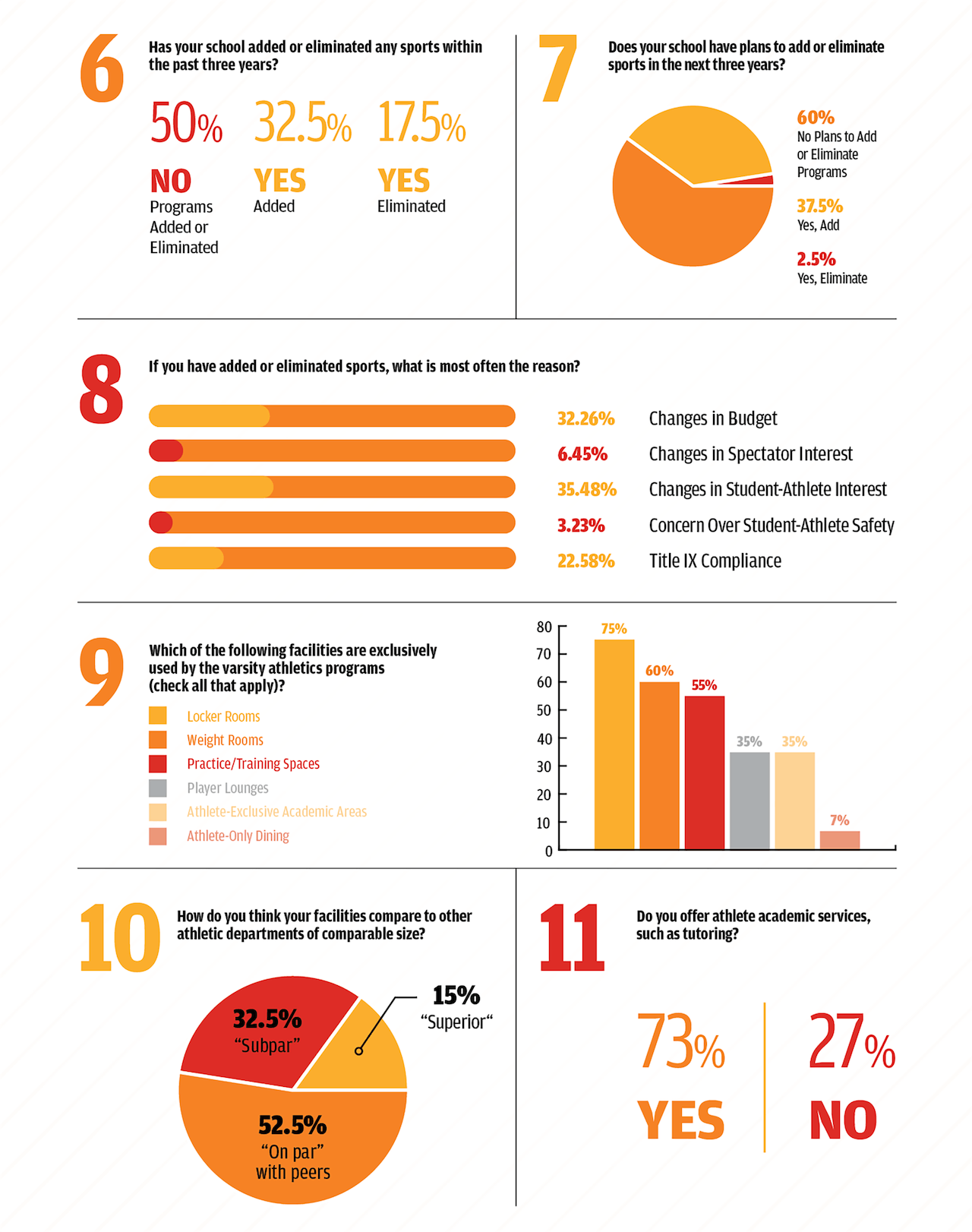 Respondents report receiving an average 54.6 percent of their operating budget from university funds or students fees, followed by 17.9 from donations, 13.3 from ticket sales and 10.7 from media revenue.

On the facilities front, 52.5 percent of respondents rate their offerings as “on par” with their peers, while 32.5 percent feel theirs are “subpar” and 15 percent boast superior facilities. Seven in every 10 respondents report plans to build or renovate athletic facilities within the next three years.

As an indicator of the perceived importance of technology in training, Performance Testing Equipment outranks Powerlifting in terms of equipment priorities among respondents, followed in the top five by High-Intensity Interval Training, General Cardio and Sports Performance.

Not surprisingly, two widely discussed policy issues shot to the top of other lists in our survey. A plurality of respondents rank student-athlete compensation as the most important student-athlete issue they face (ahead of such topics as drug use, academic support and mental health), while transgender inclusion tops the list of most important program-related issues (ahead of conference realignment, student-athlete transfer rules and sexual assault allegations). 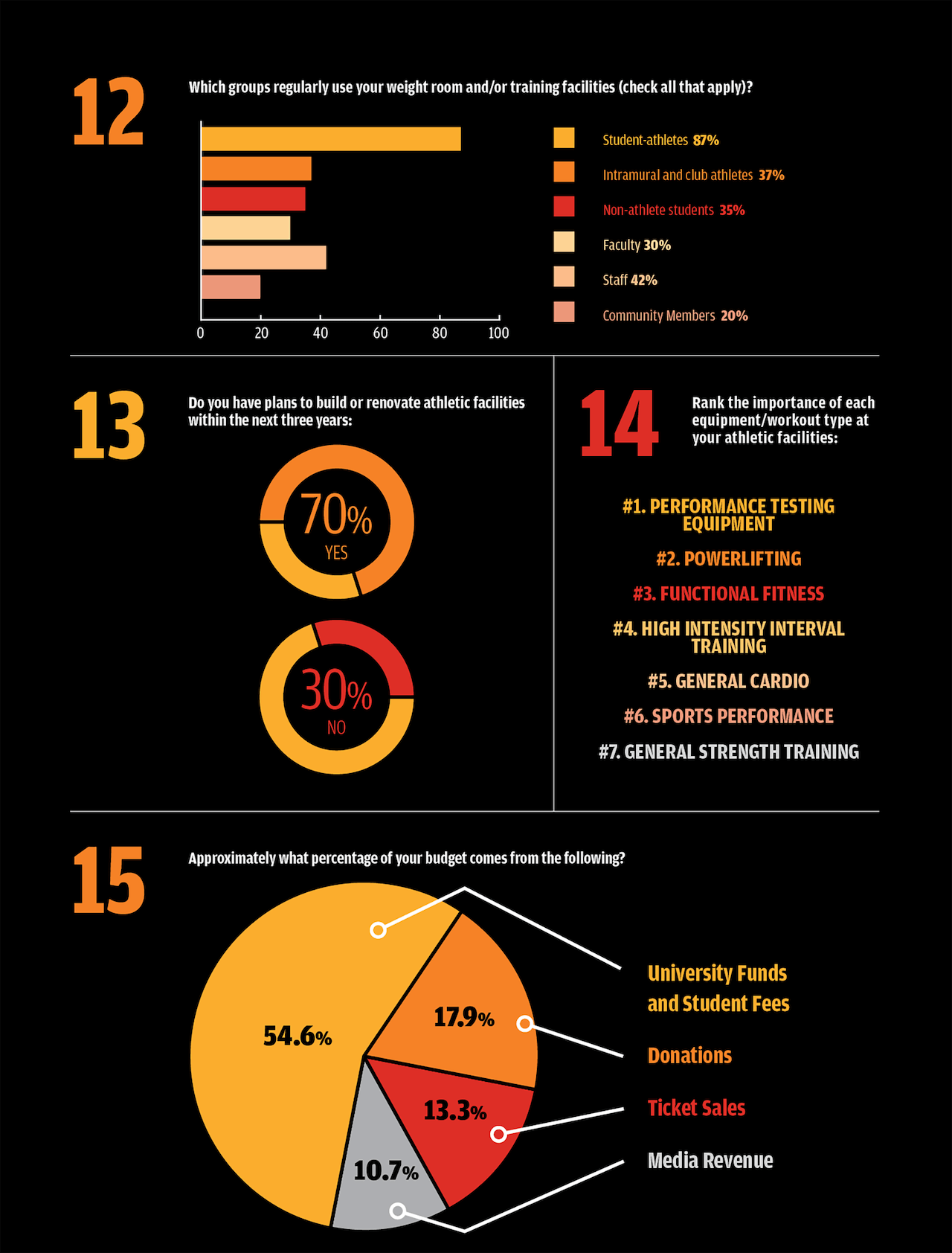 Thanks to all who took time to respond to our survey and for offering peers a peek at your operations.
— The Editors

You can find a full downloadable pdf of this survey here.

How Athletics Departments Are Designing and Equipping Facilities for the Future 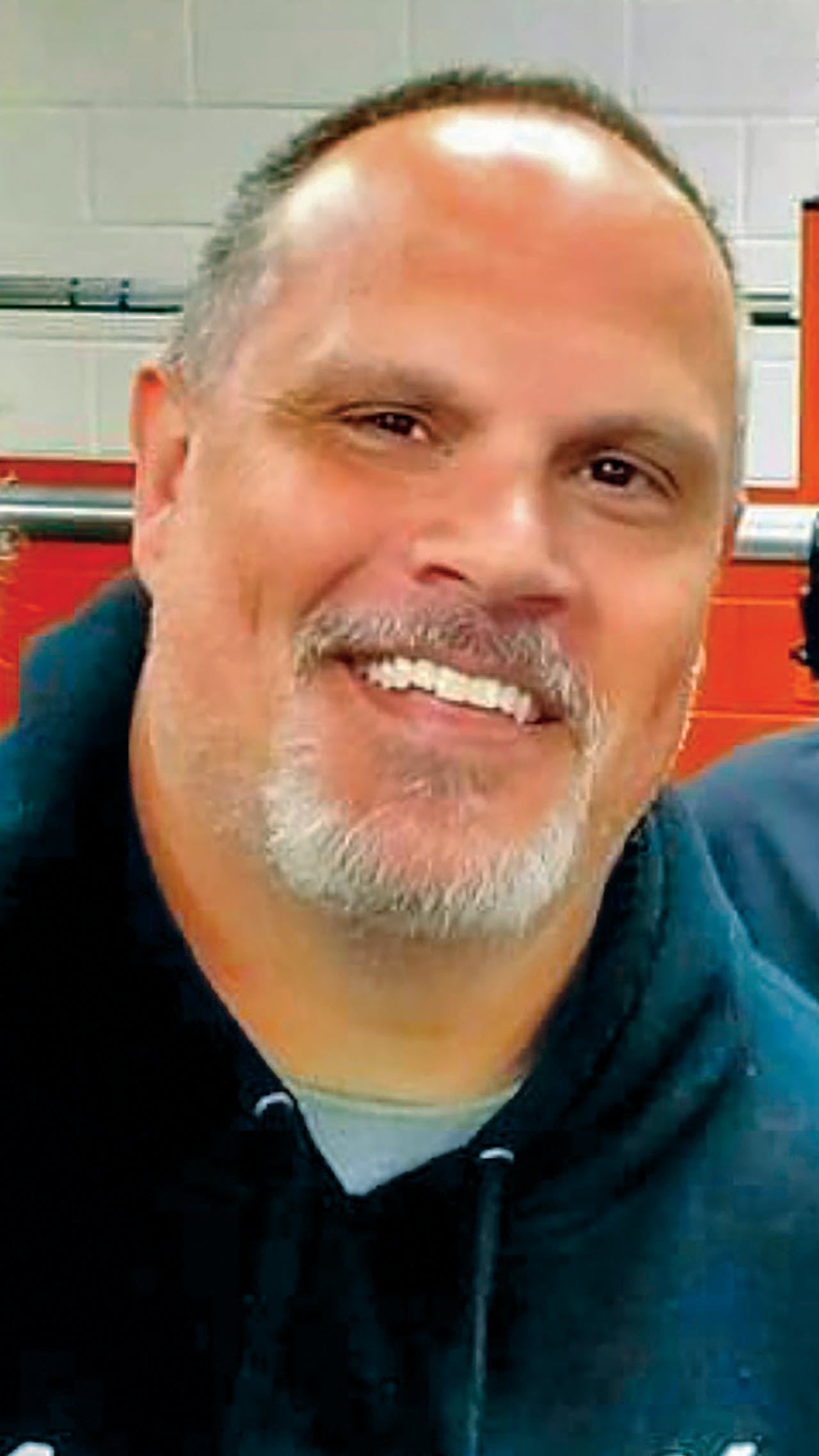 Kelly Neuhauser is national athletics sales specialist
at Matrix.While college athletics has undergone some dramatic changes over the past few decades, there is at least one constant — training. However, while the athletes themselves are still getting in their reps and cardio at the training facility, the way athletic departments think about those spaces and the equipment within them is constantly evolving. Athletic Business sat down with Kelly Neuhauser, national athletics sales specialist with equipment manufacturer Matrix, to get a better understanding of how college athletics departments are approaching the design and equipping of their facilities.

What are some of the trends you’re seeing with the college athletics departments that you currently work with?
The two things that come to my mind right now are branding and technology. Schools want to have their name, their logo on everything — even more so in the last five to seven years. I think it’s a big differentiator for the schools and a source of pride. And from the technology standpoint, that’s just the age we’re in. So, we have to ask ourselves how we as manufacturers best adapt to that, which requires listening to our customers and continuously improving our portfolio based on their feedback.

Are there particular programs or facilities that you think are really forward-looking in terms of their approach to the design of their facilities or how they’re equipping them?
It’s funny, because every time I go to see a school, and I’m working with a coach, I’ll hear, “Hey, I hear so-and-so are building a facility, what are they doing?” So, I think they’re all chasing each other, and they want to see who’s doing what and how they’re doing it. To be honest, they’re all doing a great job. They’re all building these beautiful facilities, and they’re not just trying to do it for the beauty alone. I think they’re really trying to equip them as best they can for their athletes now. Five or six years ago, it was an arms race. It was who could build the biggest, the fastest. Now it’s, “Hey, it doesn’t have to be the biggest, but let’s just have it be the most functional space that we can make it.” That’s the trend we’re seeing now. It doesn’t have to be a 50,000-square-foot facility; it can be a 10,000- to 15,000-square-foot facility, but it just needs to be functional.

What advice would you give to coaches or athletic directors who are looking to equip a new facility?
I tell coaches: don’t buy the name, buy the relationship. A lot of people get caught up in brands and names, but who’s going to service that product? Who’s going to be there? Is this person going to just come around, sell to you and then not be around in a couple years? Who’s going to advocate for you? We want to offer you the most for your money, which includes that relationship. The other thing I tell coaches is don’t be rack poor. These coaches want to have these racks with all this stuff on it, but you shouldn’t spend all your money on the rack or the name that’s on the rack; you should be trying to spend your money to get the best equipment for the best value.

What is Matrix’s approach to maintenance and service of the equipment?
We have one of the best warranties on the market. Another thing we have is a great service support system across the country. We can set up a preventative maintenance program where we can have our technicians come out to service everything, or we can just have your cardio serviced, or your strength serviced. And we can do that anywhere from two to six times a year, depending on what the customer wants and needs.

How do you help equip a college training facility that needs to support multiple sports programs, such as basketball, football and soccer?
I try to tell coaches to use what’s called the “mirror game.” Try to set your room in mirrored boxes or segments so you break your room up. Say you’re doing a room of 16 racks, you can break those up into two sets of eight or four sets of four. And each one of those segments has the exact same number of stations, the exact same number of racks and the exact same amount of equipment. So, if you’ve got 16 racks and break them up into four different segments, you can have four different teams working out at the same time. This is a helpful way of looking at it for a lot of these smaller colleges that don’t have these enormous facilities. Everyone wants to lift in that 3 to 6 p.m. window, so we really have to take a look at that and figure out what the best layout is to get the most teams in there, while also being functional, efficient and safe. And to be able to do that, it’s important to make sure that everyone has the same equipment at each station.

Have there been changes in the way college athletes train that Matrix has had to respond to?
Definitely. This goes back to that technology piece. Adapting to the new technology is really important. On our end, we have to figure out how best to integrate these new features with our current portfolio. Another great benefit of choosing to start a partnership with us is that we work with individual coaches to find equipment that has features that fit their training style and methodology.