An outbreak of herpes gladiatorum among prep wrestlers in Minnesota suggests that the athletic and medical communities must take more steps to prevent infectious skin diseases. 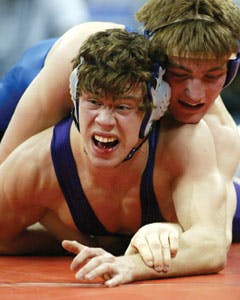 The athletic and medical communities must take more steps to prevent outbreaks of infectious skin diseases. That's the message from the physician who recommended the suspension of high school wrestling for eight days in Minnesota earlier this year following an outbreak of the highly contagious herpes gladiatorum virus. "We need physicians to be more aware of this condition and consider it a threat," says B.J. Anderson, a family practitioner and noted authority on infectious skin diseases, as well as a member of the Minnesota State High School League's Sports Medicine Advisory Committee.

It is common in many states for herpes gladiatorum - a permanent, recurring form of the herpes simplex type 1 virus that is transferred by skin-to-skin contact and characterized by lesions on the face, neck and arms - to warrant the cancellation of isolated prep wrestling competitions. After reports of 24 confirmed cases of the disease spread across 10 schools in Minnesota, however, the MSHSL imposed what is thought to be the nation's first statewide ban of any high school sport for health and safety reasons. The number of confirmed herpes gladiatorum cases climbed to 40 across 16 schools during the suspension, which allowed for training and conditioning to continue.

Additionally, state associations and schools representing wrestlers who competed in a 13-state December tournament in Rochester, Minn., were put on alert. "That doesn't necessarily mean it's only occurring in these kids from that specific tournament," says Anderson, himself a carrier of the virus, which he contracted as a collegiate wrestler. "You've got a lot of other teams in other states, and they could have their own individual outbreaks. This pops up every few years."

Anderson - who now realizes Minnesota should have suspended the 1999 wrestling season after 61 wrestlers and three coaches from 19 schools contracted herpes gladiatorum - recommends athletic directors, coaches and student-athletes take several commonsense precautions against herpes gladiatorum, including daily disinfecting of mats, uniforms, headgear and pads. He also suggests that wrestlers shower immediately after practices and competitions, and not share towels, bar soap or razors. Meanwhile, coaches should conduct skin checks on wrestlers before practices and meets, looking for large, deeply abscessed pimples or clustered vesicles. Swollen lymph nodes and fever are two additional symptoms. Any suspect wrestler should be instructed to sit out until cleared by a doctor. Coaches and athletic directors can go a step further by asking local physicians to be on the lookout specifically for herpes gladiatorum and other infectious skin diseases. "Coaches need to make the time," Anderson says. "If they don't, then the potential exists for big problems."

These precautions also will help fight methicillin-resistant staphylococcus aureus (MRSA) - a potentially fatal type of bacterial skin infection common in wrestlers and football players and characterized by abscesses similar to the ones caused by herpes gladiatorum. "MRSA has the potential to be a much bigger issue," Anderson says. "But these are the basic preventive guidelines across the board, no matter the disease."

The National Federation of State High School Associations, under Anderson's leadership on the organization's Sports Medicine Advisory Committee, recently revised its position statement on herpes gladiatorum and MRSA in all sports to stress the importance of strict hygiene. "Hopefully, this opens everyone's eyes," says Bob Colgate, an NFHS assistant director. "We've preached long and hard about making sure athletes, facilities and equipment stay clean. It takes a collective effort. We can send out all the information in the world, but what are schools doing with it? Not every high school has a certified athletic trainer, and not all of our states even have a sports medicine advisory committee."

In Wisconsin, wrestlers are required to receive doctor-administered skin checks - good for only three days - prior to competing. "Most of the coaches around the state will say our skin check system is overprotective," Bob Empey, co-coach of the Stoughton High School wrestling team and president of the Wisconsin Wrestling Coaches Association, recently told the Wisconsin State Journal. "But when a situation like the one in Minnesota happens, we are glad that it is."

Minnesota's wrestling season resumed just in time for mid-February's sectional tournaments, and there were no disqualifications based on skin conditions. "I think officials in Minnesota did the right thing," Colgate says. "They took a little bit of heat for it, but you just don't know how widespread something like this can be."

Adds MSHSL director of information Howard Voigt, "It got to the point where we felt, without a suspension, it could have become an epidemic."