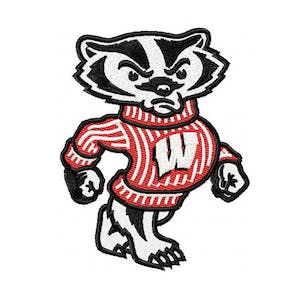 The University of Wisconsin has banned from all athletic events an individual accused of “abhorrent anti-Asian activities” during Tuesday’s men’s basketball game at Northwestern in Evanston, Ill.

A video shows a man dressed in Wisconsin's signature red making an obscene gesture and yelling at a group of Northwestern fans, some of whom appeared to be Asian-American, before stretching the corners of eyes in a well-known racist gesture. It then shows Northwestern staff confronting him and authorities escorting him out of Welsh-Ryan Arena.

In a tweet sent late Thursday morning and cited by Madison NBC affiliate WMTV, the university condemned the person’s actions and applauded Northwestern officials for ejecting him. It also stated that the man will no longer be allowed to buy tickets for games through university platforms, stating, “He is no longer welcome at UW Athletics events.”

Separately, the UW athletic department's Twitter account posted, “We are deeply disturbed by this behavior and find it abhorrent & disgusting. This is no representation of what it means to be a Badger.”

The man in question is not a current UW student, nor an employee of the university. UW chancellor Becky Blank, who is leaving Wisconsin to become Northwestern's first female president, and first-year athletic director Chris McIntosh also released a 296-word joint statement about the incident.

"Our events should be a place for everyone to enjoy the excitement of college sports," the statement read, in part. "The University of Wisconsin, Northwestern University and the Big Ten Conference promote good sportsmanship, appropriate fan behavior and a welcoming atmosphere for all fans at all athletic events. Racist behavior at our venues is unacceptable and we will take action promptly to address it.

"We also want to acknowledge that hateful behavior like this still happens far too often, on and off campus — towards members of our Asian, Pacific Islander and Desi American community as well as other marginalized communities. It inflicts pain and fear and causes students, staff and faculty to feel unwelcome and unsafe. Most of the time it is not captured on video and the perpetrators are not identified. In this case, we are grateful to the fans that documented and shared this incident."

The statement concludes, " We remain committed to supporting the individuals and communities that are harmed by this behavior and ensuring they know they belong and are valued. We will take all appropriate actions under university policies in response to incidents like this. We encourage anyone witnessing or experiencing an incident to report it. Being a Badger means speaking out and supporting our fellow Badgers."

The joint statement provided a link to the dean of students office with instructions on how to "report bias or hate."

In addition, the Wisconsin Alumni Association posted the following on Facebook: "The Wisconsin Alumni Association (WAA) condemns the offensive actions taken by a Badger fan at the Northwestern-Wisconsin basketball game on January 18, 2022 and acknowledges the impact that hateful behavior has on our alumni communities. The behavior demonstrated at the game is abhorrent and conflicts with our organization’s values. We want to assure all members of our alumni community that WAA works to create a positive, welcoming, safe and inclusive environment for alumni and guests and we will not tolerate acts of discrimination or harassment."