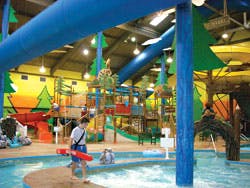 You'd be hard-pressed to find someone who will argue that swimming is not a healthy physical activity. Water exercise creates less stress on joints and bones than land-based exercise, allowing participants to enjoy the sport at practically any age - and for a lifetime. But recent studies continue to reveal that the environment in which swimming in chlorinated pools takes place may be contributing to an increased risk of asthma and other respiratory problems.

Last year, researchers at Catholic University of Louvain in Brussels, Belgium, compared the health of 733 teenagers between the ages of 13 and 18 who swam in chlorinated indoor and outdoor pools for various amounts of time with that of 114 adolescents who swam mostly in pool water ionized with concentrations of copper and silver. In children with allergic sensitivities, swimming in chlorinated pools significantly increased the likelihood of asthma and respiratory allergies, while swimming in non-chlorinated pools did not.

The researchers also discovered, in a separate study, that 36 percent of 400 children who were exposed to swimming (either indoors or out) before they were two years old had a history of bronchiolitis - a common lung inflammation, often caused by a virus - while only 24 percent of those who didn't swim at that age developed the same condition. Children exposed to indoor swimming before age two also were three times more at risk of developing bronchiolitis than their non-indoor-swimming peers. And 15 percent of those swimmers with bronchiolitis were diagnosed with asthma as they got older, compared to only 4 percent among non-swimming children.

The only plausible explanation, Catholic University researchers concluded, is that chloramines - a mixture of chlorine, ammonia and other organic byproducts of the human body such as hair, sweat and urine that hover above the water's surface where swimmers inhale - cause changes in a swimmer's airway and promote the development of allergic reactions. "It is probably not by chance that countries with the highest prevalence of asthma and respiratory allergies are also those where swimming pools are the most popular," Alfred Bernard, a toxicologist involved in both studies, told the Reuters news service.

Jim Miller, a team physician for USA Swimming, informed The New York Times last year that he thinks asthma is more prevalent in competitive swimmers than recreational swimmers. "The U.S. national team has a bunch of asthmatics on it," he said.

Poor indoor air quality in natatoriums also may be inadvertently driving swimmers elsewhere. "When some of our high school swimmers are going on college recruiting trips," Miller told Times reporter Gretchen Reynolds, "we tell them to follow one simple rule: If you walk into the building and you can find your way to the pool without directions, don't go to that school. A smelly pool is, chemically, way out of balance."

Although pool water is routinely shocked to control water-borne bacteria, chloramines can linger and recirculate through a facility's dehumidification system, which typically only traps airborne particulates, not gases. Excessive chloramines were blamed for disrupting the 2007 ConocoPhillips USA Swimming National Championships at IUPUI Natatorium in Indianapolis, where several swimmers encountered breathing difficulties.

While water quality is the natural starting point in the battle against chloramines, pool manufacturers and equipment suppliers have begun addressing the problem in earnest with advanced natatorium air handling. 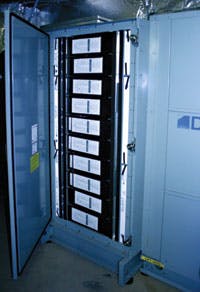 MAKING A SPLASH Splash Universe in Dundee, Mich., was the first indoor waterpark in North America to use ChloraguardÂ® gas-phase air purification media to filter out chloramines and other gaseous contaminants.

Paddock Pool Equipment Company recently introduced the Evacuator, which it claims removes high concentrations of chloramines to improve air quality throughout facilities that house indoor pools. A gutter-level perimeter vacuum pulls the bad air off the surface of the water and exhausts it to the building's exterior. As a result, people inside are better able to process oxygen, according to the manufacturer, improving the performance of competitive swimmers and the well-being of recreational pool patrons. The Evacuator also reduces power consumption and recovers heat from water surface air - providing both immediate and long-term benefits.

"The chloramines problem has been around for a while, but nobody was able to identify exactly what they should be looking for," says Nick Agopian, vice president of Circul-AireÂ®, a subsidiary of Dectron Internationale, which makes ChloraguardÂ®, the first gas-phase filtration system introduced specifically for indoor pool applications in 2006. "No one knew that the problem was actually chloramines until people started studying and identifying this back in the early 2000s."

Gas-phase filtration has been around for a while, too. The process has long been used at wastewater treatment plants and paper mills and in other heavy industrial applications. In indoor pool applications, it uses carbon-based impregnated pellets to continuously adsorb gaseous contaminants as the natatorium's air is circulated through the dehumidifier. This reduces the amount of outdoor air that is introduced inside the pool facility - decreasing energy costs related to heating outdoor air in the winter and cooling it in the summer.

Many manufacturers of dehumidification equipment are now involved in producing gas-phase filtration, as owners of public and private facilities, waterparks and even residential pools are in the early stages of retrofitting their existing dehumidification units. Commercial space requirements for a typical gas-phase filtration unit range from about nine square feet to 50 square feet, although Circul-Aire is in the beta testing phase for smaller, less-expensive units that can be suspended above the pool or located in corners of the pool deck.

While the impact of gas-phase filtration in indoor environments can be great, it may not be immediate. "When you're cold and you turn on the heat, you feel the warmth. When you're hot and you turn on the air conditioning, you feel that refreshing effect. Same thing with humidity and the dehumidifier; you feel the difference," says Agopian, who also is chair of the American Society of Heating, Refrigerating and Air-Conditioning Engineers' Technical Committee 2.3 for Gaseous Air Contaminants and Gas Containment Removal Equipment. "When it comes to gas-phase filtration, you won't necessarily feel the effect right away, because your body doesn't react as fast. You're talking about gas contaminants that are below the threshold limit. You don't smell some of them, but they're there."

Chloramines aren't the only gases common to indoor environments that have researchers worried. Ozone, aldehydes, sulphur and other environmental contaminants also can affect the health of swimmers, employees, spectators and other building patrons.

This important topic will be addressed at ASHRAE's 2011 International Air-Conditioning, Heating and Refrigerating Exposition, which will take place Jan. 31 through Feb. 2 in Las Vegas. Consulting engineers who work with independent contractors, as well as representatives from the YMCA of the USA and other fitness and recreation organizations, are expected to be present, Agopian says, to learn more about how chloramines and other gas contaminants can be better controlled in indoor pool environments. Additionally, two ASHRAE committees (including Agopian's) are funding a study to gauge the effects of gas-phase air filtration and determine ways to control the amount of outdoor air being brought into natatoriums.

"We have to reduce the allowable limits," Agopian says. "For example, we used to say that you could get away with 10 parts per billion of ground-level ozone coming in from outdoor air. Now that's down to 2.5 ppb. Researchers are finding that there are other issues causing irritation and health effects. All of these other gases that have been around for centuries can be handled by technologies that are out there." 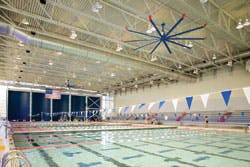 Photo of a fan used on a natatorium ceiling, courtesy Big Ass Fans

There is no shortage of manufacturers providing a variety of products designed to improve indoor air quality in natatoriums, ice rinks, and other athletic and recreation facilities. Here's a list of companies that strive to make indoor environments healthier and more comfortable:

For a list of manufacturers that provide dehumidification units and other indoor air quality products, visit the AB online Buyers Guide.