Cutting-edge approaches to conserving water and energy have made an Oregon aquatics center a model for sustainability. 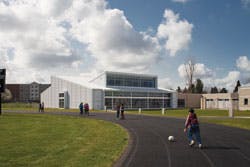 METAL OF HONOR The East Portland Community Center natatorium is the first LEED Platinum-certified aquatics center in the United States.

In a sense, the more utilities required to operate a facility, the more opportunity exists for conservation. Nowhere in our industry is that truer than at the aquatic center, which holds the dubious distinction of being the facility type that is among the most voracious consumers of both energy and water.

Thus, an inherent challenge was created when the sustainability-minded city of Portland, Ore., set out to create a new natatorium for an East Portland neighborhood that was in need of recreational aquatics opportunities. That challenge was actually self-imposed: The city requires that all new municipal buildings obtain a minimum of LEED Gold certification, and even a handful of mandatory individual LEED credits are specified.

The aquatics center - a 22,000-square-foot addition to the East Portland Community Center (EPCC) that features a large leisure pool with a water slide and a current channel, a spa and a 25-yard lap pool - represents the first parks and rec department facility that was forced to meet the city standards. In the end, it did more than that, as late last year it officially became the country's first LEED Platinum aquatics center.

According to Eric Ridenour, an associate with SERA, the Portland-based architectural firm that led the project's design, the certification achievement wouldn't have been possible without an integrated process that involved the parks and rec department from the outset. "That process led people to think about how we could deliver multiple goals while still saving energy," Ridenour says.

For example, at other pool facilities within the city, parks and rec staff had fielded complaints related to air quality and the faint smell of chloramines in pool areas. The project team devised a system in the natatorium that creates eight air changes per hour rather than what Ridenour says is the more typical seven. The system also creates slow-moving air across the pool deck and water surface where chloramines tend to accumulate. One of the project's engineers then suggested using all that moving air to create a sustainable advantage.

"If you're pulling that much air in a building that's heated to 86 degrees, there's the potential that you're pumping a lot of conditioned air out the back end of that air-handling unit," Ridenour says, adding that a heat exchange system was incorporated to capture that air and use it to preheat pool water by approximately 10 degrees. "That is where the single biggest energy savings in the building is."

To conserve yet more energy, the team also used a complex physical modeling process to create an evenly distributed daylighting design, in addition to the latest computer modeling techniques. Designers took advantage of the nearby University of Oregon Energy Studies in Buildings Laboratory, in which a physical model of the building could be tested in a heliodon (for modeling direct sunlight) as well as in an artificial sky lab, which Ridenour describes as essentially a black cube extending 12 feet in each direction, with mirrors on the walls and a very even fluorescent light array on the ceiling.

As a result of the modeling techniques, fenestration in the building envelope - according to measurements taken since the building has been open - has allowed sensor-controlled electric lights in the natatorium to remain off for approximately 60 percent of the building's operating hours, which can be from as early as 5:30 a.m. until well into the evening.

Combined with the energy conservation measures, the renewable energy sources create what the city estimates to be a 74 percent reduction in energy demand compared to a traditional building meeting ASHRAE standards. "In terms of LEED, the project captured every available credit in the energy and atmosphere category," notes Ridenour.

Naturally, water conservation was another major design goal. While low-flow fixtures and sensor-activated showers in the locker rooms have reduced water usage and contributed to LEED certification, by far the single biggest water-saving measure in the facility has been a regenerative media filter system. The parks and rec department began researching the filtration system only after it was determined that the neighborhood's outdated combination sewer/stormwater infrastructure would require the water volume typically backwashed in a traditional sand filtration system to first enter a new holding tank, where its flow rate could then be controlled.

To avoid paying for the holding tank, the team opted to pay the somewhat higher initial price of the regenerative system, as compared to sand. Through a self-cleaning process, regenerative media filters incorporate either DE or perlite, and require a fraction of the backwashing associated with sand filters.

The result of all these water-saving strategies combined, according to the city's estimates, is a filtration system that is preventing the flow of more than one million gallons of water per year compared to typical natatoriums built to code.

Such a sustainable facility in aquatics may not have existed previously if only because it has taken time for project design stakeholders (architects, engineers, contractors, and facility owners and operators) to feel sufficiently comfortable incorporating some of the latest technology related to building systems, pool filtration and renewable energy without also trying to rely on more traditional approaches as fallbacks.

"With good integrated design from the beginning, you can now control the capital costs, whereas the projects I've seen that have paid a real green premium are those where the commitment to green design was made late in the process," says Ridenour. "The classic example is a building that's designed for natural ventilation, but then adds really robust mechanical ventilation. You pay a premium for operable windows, but then you also pay a premium for a mechanical system that's probably bigger than you need. You'd see the problems in the past where people try to have a conventional design and a high-performance design running side by side."

Unfortunately, there are other potentially prohibitive financial considerations. At this point in time, a facility such as East Portland's may not be viable in other jurisdictions. The city of Portland, regional government organizations and the state of Oregon all have backed up their talk of sustainable building in recent years with actual tax incentives. The city and region have been at the national forefront of creating both the physical and financial infrastructure to allow for municipalities and other large institutions to develop high-performance buildings.

"A part of this that can be tricky is the demand for tax credits," says Susan Meamber, project manager for Portland's parks and rec department, referring to the third-party ownership and operations agreement of the facility's PV arrays through which the city receives credit for its reduced energy consumption. "The city of Portland is pursuing that arrangement for other facilities. You do have to find that tax credit investor. But if that's an option, it can be a good arrangement."

Ridenour notes that even smaller municipalities throughout the state are beginning to see long-term value in providing up-front incentives for green building projects. "The payback analysis of the investment up front is starting to make a lot of sense, especially for schools, higher ed institutions or municipalities that are going to be operating their own buildings," Ridenour says. "That investment in high-performance buildings can now pay off pretty quickly, and if it can also be offset with incentives, that's just icing on the cake."