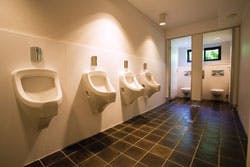 Picture a gallon jug of water being poured down a drain. Now consider that a gallon is the standard amount of water used to flush a urinal. "It amazes me; the fact that it's even allowed astounds me," says Bryna Dunn, vice president and director of environmental planning and research at Moseley Architects, which has offices in Virginia and the Carolinas. "That standard came out of the Energy Policy Act of 1992, so apparently we were using even more than a gallon before that."

The national nonprofit Alliance for Water Efficiency estimates that a health club or recreation center employee will flush approximately three times during an eight-hour shift, and that patrons will flush approximately twice per visit. Do a quick head count of males around any health club or recreation facility and the urinal flushes (and gallons) add up fast. Thankfully, manufacturers now recognize the demand for water-efficient fixtures, including toilets, faucets, showers and, yes, urinals. The next obstacle is what the Alliance for Water Efficiency described in a 2008 report as "the greatest impediment to achieving water savings" in health club and rec center applications: "the common disconnect between the person that pays the water bills, the owner and manager, and the various contractors that maintain the facility and equipment."

Fixture efficiency is just one facet of an advanced locker room water conservation strategy. "One of the things we often try to do is capture stormwater and use it in our facilities for nonpotable uses such as flushing," says Dunn. "If we can eliminate the use of drinking water in toilets and urinals, we've already cut our water consumption tremendously." She notes that the reuse of stormwater does require the additional costs of a cistern, a separate filtration system and a dual-piping system. And some local codes require that recycled stormwater be treated with food-grade dye - so it is not easily confused with drinking water - before it is introduced to the facility.

Many toilets still in use in athletic, fitness and recreation settings are flushometer-valve and pressure-assist toilets featuring 3.5 gallons-per-flush or greater, although 1.6 GPF (known as low-flow toilets) and 1.28 GPF (known as high-efficiency toilets) options are now available and have proven to be effective in removing waste. According to the Alliance, replacing an existing commercial flushometer-style toilet costs approximately $250 to $400 per 3.5 GPF unit. (The organization warns against using 3.5 GPF flush-valves in lower-flow toilets - even though they may seem to fit - or else the water savings will be lost.) Also, the group recommends posting flushing instructions above dual-flush models (those which offer a higher GPF rate for solid waste and a lower GPF for liquid waste).

As for urinals, which typically are used far more frequently than toilets in male locker rooms, significant savings can be achieved by replacing the standard 1 GPF units with Â½ GPF, pint-per-flush or even waterless units, in which a trap cartridge works with a liquid sealant that rises to the top of the urine and prevents odor emissions. While waterless has become popular in stadiums and arenas - where natural breaks in game action result in usage spikes that can create water-pressure problems - Dunn suggests that pint-per-flush units may be the most environmentally friendly of the options in locker room settings, "especially if you're flushing with stormwater," she says. "With waterless, you do have these little plastic cartridges and some biodegradable oil that need to be replaced periodically."

Existing faucets provide an easy and affordable option for the immediate reduction of locker room water consumption. Many faucets approach the maximum allowable rate of 2.5-gallons-per-minute, which many experts believe to be overkill if the goal is simply a good hand-washing. "You really can get a decent hand-wash at one or even one-half a gallon per minute, especially if you have foaming hand soaps, because they take a lot less water to remove than gel or cream soaps," says Dunn. "If you can find a way to drop two gallons per minute from your consumption tally, that's pretty impressive." The Alliance suggests that such a reduction can be made possible simply by retrofitting faucet aerators, a process that typically costs less than $1 per faucet.

As with faucets, the maximum allowable flow rate for showers is 2.5 GPM, although the Alliance believes that most health club and recreation center showers actually approach 4 or 5 GPM rates.

With shower flow rates, there is a safety consideration. According to the Alliance's report, "As showerhead flow rates have decreased, the incidence of accidental scalding has increased," a result of "the loss of thermal buffering in water volume when supply water changes suddenly." While thermostatic mixing valves mitigate that problem, they are largely only available for showerheads with 2.5 GPM flow rates.

"I don't see people adjusting their showers quite as often," says Dunn. "You could probably go down to 2 or 1.8 GPM, but much lower than that I'm not convinced you'll be able to get a really good shower."