Renovating just one pool can be a huge undertaking — from narrowing down the available options to getting investors and the community on board to navigating closures while work is done. So it isn't difficult to imagine that committing to a renovation plan aimed at revamping every municipal pool over the course of several years is an impressive undertaking — especially in a city the size of New York, which boasts a staggering roster of 34 outdoor pools, 19 outdoor mini-pools and 12 indoor pools.

According to Meghan Lalor, director of media relations for NYC Parks, the department built 19 intermediate-sized pools scattered throughout the city during the early 1970s. All of these structures took the form of rectangular and unadorned concrete buildings. The pools themselves are uniform rectilinear facilities, most of which measure 75 feet long by 60 feet wide and three and a half feet deep.

"This type of construction was significantly cheaper to produce than the previous, large-scale pool facilities built during the WPA (Works Progress Administration) era," says Lalor. "While an economical solution to provide facilities for physical recreation and respite from the summer heat, these pools were mostly uninviting and aesthetically boring."

In comparison to the Olympic-sized WPA-era pools of the 1930s and '40s — impressive products of the American New Deal that featured stylized support structures in the Romanesque Revival and Art Deco styles, as well as advanced engineering and technology for the time (including state-of-the-art filtration and chlorination systems and off-season options for adapting the spaces for volleyball, basketball, shuffleboard, paddle tennis, handball, roller skating, boxing instruction and dancing) — the "vest pocket" pools of the '70s were relatively utilitarian.

"As the pools became more popular and well-attended, the design and activities failed to keep pace," says Lalor. "Though the pools were a place that people went, they were no longer the place to be. The design remained bare, seating and shade were limited, and there was no programming."

Through a unique mix of art, design and programming, NYC Parks transformed a collection of dilapidated pool decks into engaging community recreation destinations.

New look for summer
In an effort to liven up the stark outline of the original pools and bring new interest to structures that haven't seen any major changes over nearly half a century, the NYC Parks commission embarked on a project of impressive scale, launching the Cool Pools initiative in five locations simultaneously in 2018.

Renovations began with the Douglas and DeGraw Pool in Gowanus, Brooklyn; the Fisher Pool in East Elmhurst, Queens; the Mapes Pool in East Tremont, Bronx; the Sheltering Arms Pool in Harlem, Manhattan; and the West Brighton Pool on Staten Island. 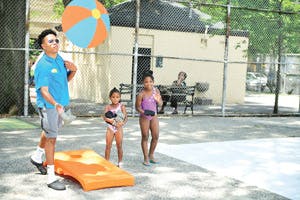 These pools debuted their new looks last summer, exhibiting summer-themed wall art, cabanas and lounge chairs, landscaping, and a host of free poolside activities, including Zumba and yoga classes, arts and crafts sessions, games and sports — in addition to the already established free citywide Learn to Swim Program that is accessed by nearly 7,000 local children every summer.

Through this unique mix of art, design and programming, NYC Parks transformed a collection of dilapidated pool decks into engaging community recreation destinations.

Says Lalor, "Over the 2018 season, we saw a 27.2 percent increase in attendance across the five Cool Pools. The largest impact was in Staten Island, where West Brighton saw an increase in attendance of 73 percent. Anecdotally, we heard people start to refer to the Cool Pools as the resort pools and asking how much they cost to gain entry" — a big win for the municipal pools, none of which charge residents an entry fee.

As the pools became more popular and well-attended, the design and activities failed to keep pace. Though the pools were a place that people went, they were no longer the place to be.

Different themes, similar makeovers
The Douglas and DeGraw Pool in particular underwent a significant overhaul, with special attention paid to the aged locker rooms and the designated first-aid areas, which are now easily identifiable with new signage. NYC Parks took the opportunity while the pool was closed for repairs to update the exterior support structures with a vibrant paint job in hues of yellow, orange and blue.

The location also invested in weather-resilient poolside sunchairs with attached umbrellas and a welcome banner with a symbolic mural featuring a sun, a water bottle, a beach ball, a popsicle, an ice cream cone and a park leaf. 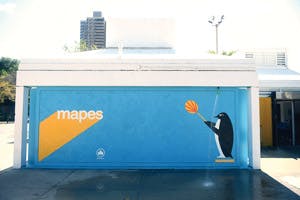 The Fisher Pool chose a different theme but underwent a similar makeover. Upon entering, visitors to the Fisher Pool are greeted with wall decals featuring penguins and an igloo. The location also exhibits new landscaping, lounge chairs, shade features, signage and a fresh coat of paint.

Although the majority of the changes were superficial, they were not achieved without a few hiccups. While the original vision for the Cool Pools project relied heavily on the use of visually arresting and prefabricated vinyl decals to liven up the bare concrete walls of the main structures, prolonged exposure to humidity around the pool deck wore on the festive scenes. 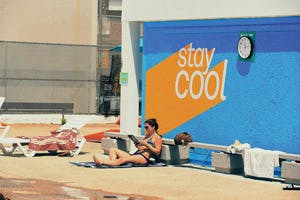 "As the season went on, they began to bubble when moisture got behind them, as well as folks picking at and peeling them when they were in line to enter the pool. They did better at certain sites than others," says Lalor. "In cases where we needed to repair them, we used paint."

Moving forward with more renovations in 2019, the department has decided to go in a different direction. Says Lalor, "This year we've determined that painting the same designs using stencils would be a more durable solution with the same visual impact."

Lalor reports that all of the renovations were done in-house by NYC Parks staff, with the cost of repairs and refinishing coming in at around $70,000 per pool — not including hours spent on maintenance or programming. This comes to a rough total of $350,000 last year alone, with at least another $420,000 in additional renovations planned for the present year.

Summer 2019 will see a rejuvenation of six more New York City pools: the Claremont Pool in the Bronx, the Commodore Barry Pool in Brooklyn, the Dry Dock and Wagner Pools in Manhattan, the Liberty Pool in Queens and the Tottenville Pool on Staten Island.

The Tottenville Pool is already complete and preparing to reopen to the public June 27. The facility will debut an updated first-aid building, lockers and shower rooms, comfort stations, a picnic table and a children's play area.

This article originally appeared in the May 2019 issue of Athletic Business with the title "NYC Cool Pools project brings new life to 1970s-era facilities." Athletic Business is a free magazine for professionals in the athletic, fitness and recreation industry. Click here to subscribe.