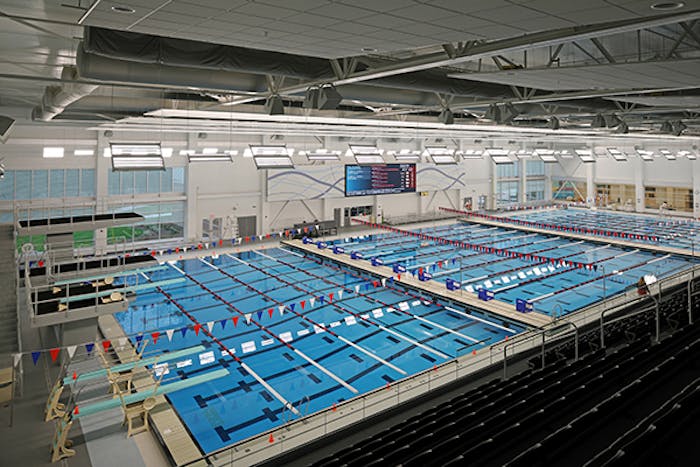 Elkhart Health & Aquatics opened in 2019 as not only one of the premier competitive and recreational aquatic facilities in the country, but also as a textbook example of how multiple organizations can work together to achieve something far greater than they could on their own.

The 171,000-square-foot facility in northern Indiana — which houses a larger-than-Olympic-sized 10-lane pool with two moveable bulkheads, a diving well with 1- and 3-meter springboards and 3- and 5-meter platforms, and seating for 1,200 spectators, plus a warm-water therapy pool, an instructional pool and a whirlpool — is operated by Beacon Health System. Initially it was intended to replace the former YMCA of Elkhart County, but as plans grew in scale and cost, the need for partnerships became critical.

“This project only happened due to a group effort,” says Kevin Milak, the facility’s aquatics director, noting that the price tag eventually ballooned from $32 million to $72 million. “For years, there have been volunteers and committees working to make a facility happen once the YMCA had to close its doors. Beacon was looking to expand to the Elkhart area with a new health and fitness location, and the community had lost its only year-round community pool. The timing was right.

“This pool is about as big as they come,” says Steve Crocker, director of sport swimming for Water Technology Inc. (WTI), the project’s Beaver Dam, Wis.-based aquatic design and engineering firm. “The pool can be separated into numerous courses — 25 yards, 25 meters, 50 meters — for competition and training.”

The facility offers long-term lease agreements with Elkhart Community Schools for high school and middle school swimming and diving teams, as well as high school physical education and lifeguarding classes. Bethel University in nearby Mishawaka uses the facility for its swimming and diving programs, too. The whirlpool and warm water therapy and instructional pools are separated from the natatorium by a glass wall and used by community members. All told, Elkhart Health & Aquatics — which also includes a fitness center, a fieldhouse, an indoor track and community meeting spaces — boasts more than 4,000 members. 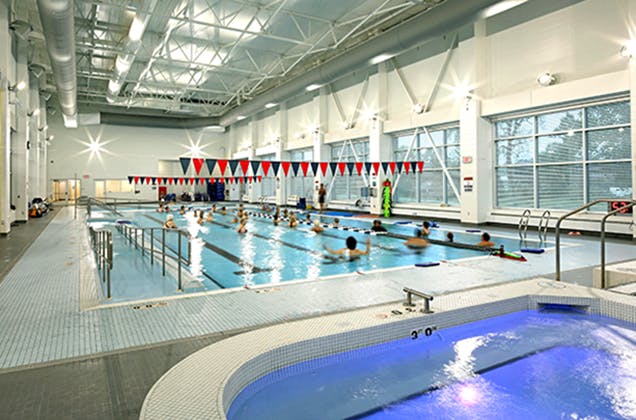 “The facility had to be designed to host very large competitions without negatively impacting the rest of the facility’s programs,” Crocker says. “We needed to make sure that all other aquatics programs could take place simultaneously and weren’t impacted by meets in the natatorium.In other words, we had to find one solution to fit many user groups’ needs. The competition pool was designed to have two meets taking place at the same time, with starts and/or turns at the oversized bulkheads. Development of a timing system layout that worked for all possible configurations — swimming, diving, water polo — took a great deal of effort and coordination.”

‘The Heart of an Aquatic Facility’

All of that effort and coordination has certainly paid off. Following three years of design and construction, Elkhart Health & Aquatics hosted 55 event days between Halloween 2019 and Easter 2020. They included high school, college and club meets, and the venue is slated to host the College Swimming and Diving Coaches Association of America’s National Invitational Championships in 2021 and 2022, as well as the 2021 and 2022 NCAA Division II Great Lakes Valley Conference Championships. USA Swimming’s Central Zone Championships are planned for next summer.

With so much activity in all of its pools, it’s no wonder that the competition pool, therapy pool and instructional pool are equipped with Pentair’s Aurora recirculation pumps. Additionally, Pentair’s EQ Series® Pumps were used on the whirlpool, which also features IntelliBrite® Underwater LED Lights.

“People sometimes joke that there’s nothing more expensive than a cheap pool pump, because you’re going to pay for it over and over by replacing it,” Crocker says. “WTI has a long history in this business, and we’ve seen a lot of equipment fail over the years. That’s why we think it’s really important to specify quality equipment. And pumps are the heart of an aquatic facility. If they fail, your facility is closed.”

Crocker also cites Pentair’s reputation for manufacturing innovative and energy-efficient equipment, providing reliable customer service and standing behind its products. “If there’s an issue, they’re going to make it right,” he says. “They will not leave a facility owner or operator dissatisfied.”

Elkhart Health & Aquatics was built to host major events. Following three years of design and construction, Elkhart Health & Aquatics hosted 55 event days between Halloween 2019 and Easter 2020. They included high school, college and club meets, and the venue is slated to host the College Swimming and Diving Coaches Association of America’s National Invitational Championships in 2021 and 2022, as well as the 2021 and 2022 NCAA Division II Great Lakes Valley Conference Championships. USA Swimming’s Central Zone Championships are planned for next summer, too. Even swimming organizations in other states have booked the natatorium for their state and sectional championship meets.

Over the summer, the facility was packed for practices, Milak says, with some groups traveling from as far as three hours away to train at the facility.

With the addition of the Elkhart Health & Aquatics, Indiana’s reputation as a swimming hotbed will only increase going forward. “There are more indoor 50-meter high school pools in Indiana than anywhere else in the country,” Crocker says, adding that WTI recently completed two other 50-meter pool projects in the state. “With this project, Indiana once again has raised the bar in terms of what is possible with a swimming facility.”