Integrating more than 100,000 square feet of recreation space into the fabric of a college campus isn't always an easy task, but the designers of the Barbara and David Gibbs Recreation and Wellness Center managed it spectacularly, said AB's panel of judges. Beyond utilizing a faÃ§ade of cast stone masonry detailing and the university's signature red brick, the designers achieved their goal by centering the building layout around an open courtyard with outdoor facilities, including a leisure pool, a 50-meter competition pool and two basketball courts. "With its complex set of programmatic elements, the design approach for this project successfully reduced the large volume into a series of elegant and well-detailed forms," offered one judge. Another called the facility "sensitively handled," noting the creative massing that breaks down the scale of large recreational components. A primary method was to locate large recreation spaces such as the gymnasium and MAC on the second floor, while the fitness center, fitness classrooms and offices occupy the smaller footprint below.

Covered walkways alongside the building link courtyards and other pedestrian corridors throughout campus, and allow pedestrians to experience the building features and activities up close. Sloped metal roof panels were used on three of the four roof areas, which provided the opportunity for higher ceiling spaces within the MAC, dance rehearsal studio and the multipurpose rooms.

This project sensitively held the campus street edge and also maintained a contextual scale, which is often difficult for recreational buildings with large program spaces. The interior detailing is superb - clean and restrained.

An interesting feature of this facility is its functional layout and massing, which is much more like the existing academic facilities on Rice's campus rather than a more traditional massive block of the typical recreation facility. The development of an exterior courtyard with a leisure pool reinforces the courtyard concept found throughout Rice's campus and further reduces the overall massing of the complex. 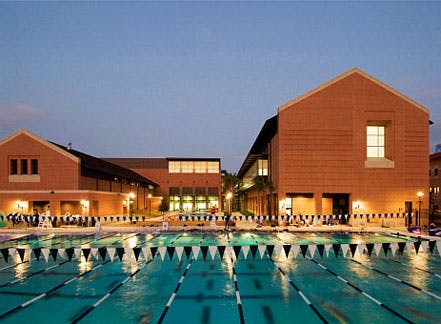