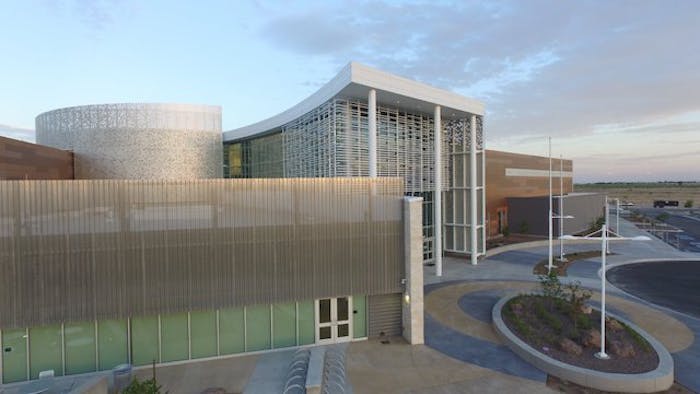 The Boston Celtics on Tuesday opened the doors of their new practice facility: the Auerbach Center at New Balance World Headquarters in Brighton, Mass. The 70,000-square-foot facility offers more than double the space of the team’s old facility, and features office space, weight and cardio training facilities, physical and hydrotherapy rooms and more. — Boston Globe

Take a peek behind the curtain at our new state of the art practice facility: https://t.co/WYIZcdn4qv pic.twitter.com/IsWnNT9ZF1

The Center of Recreation Excellence (CORE) was recently opened in the city of Hobbs, N.M. The facility, a partnership between the city, Lea County, New Mexico Junior College, Hobbs Municpal Schools, the University of the Southwesat and the J.F. Maddox Foundation, was designed by Barker Rinker Seacat Architecture and Dekker/Perich/Sabatini Architecture, while Haydon Building Corporation provided construction. The 158,000-square-foot facility features a turf field, a MAC gym, an aquatic center, a jogging track and a fitness area.  — brsarch.com

This week, the University of Oklahoma Board of Regents officially approved a plan to build a $22 million softball facility stadium. As reported in this space last week, the plans for a new facility change plans to renovate the existing facility. The new facility is expected to have a seating capacity of 3,000, and will include a 10,000-square-foot indoor practice facility. — SoonerSports.com

The best keep getting better!

The University of Massachusetts has received a $5.58 million gift to support the construction of a temporary “practice bubble” at McGuirk Stadium. The gift will also be used in part on a new scoreboard, and other planned facility improvements at the stadium. — Daily Hampshire Gazette

With the Cavaliers season concluded, Cleveland’s Quicken Loans Arena will close for the summer as it begins work on a renovation project dubbed The Q Transformation. The initial phase of construction already began in February, but now interior renovation work will begin. The arena will reopen in the fall of 2018-19. — theqarena.com