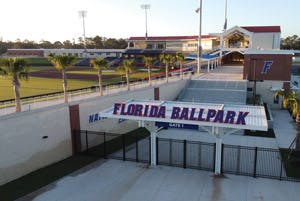 The University of Florida debuted its Florida Ballpark at Alfred A. McKethan Field in February to kick off the Gator baseball season. The $65 million project, designed by Populous, features 360-degree viewing access throughout and a tiered seating bowl with capacity for 7,000 fans. Designed with fan comfort in mind, the facility is sited to maximize shade, and canopies and ceiling fans were used throughout to help fans stay cool amid warm temperatures.

Liberty University recently celebrated the grand opening of its Liberty Indoor Tennis Center with a dedication ceremony. The new home of the school's men's and women's tennis teams, the $5 million, 48,000-square-foot project features six courts and seating for 100 fans. In addition, the facility includes locker rooms, a team lounge, a laundry facility and a concessions area.

Northwestern State University announced in February that it had received two major gifts to support its Sports Performance Center. The project will support each of the school's 14 varsity athletics teams, and include such amenities as a new weight room, a 25-foot synthetic turf pad, a nutrition center, a lounge and offices for strength staff. The phased project will ultimately see the current weight room converted into rehabilitation and sports medicine space, as well as renovations to the Eugene Christmas Training Room.

Penn State University voted to approve a plan to renovate and expand the Lasch Football Building. Plans call for the construction of a new strength and conditioning center, expanded athletic training and treatment space, and upgraded support spaces. The total cost of the project is expected to be $48.3 million, with groundbreaking expected this spring.

The Houstonian Club, a private health and fitness facility, began a $23.5 million renovation in March. Plans call for building a new indoor/outdoor restaurant overlooking the resort and sports pool areas, redesigning and expanding several group exercise studios, creating a new indoor turf performance zone and more. The architect of record for the Houstonian Campus is Huitt-Zollars Inc., while the club project will be overseen by Fabiano Designs. The timeline for the three-phase project is 18 to 24 months to minimize disruptions to member experience.

The city of Aurora, Colo., broke ground in February on a $42 million recreation center. The 62,000-square-foot Southeast Recreation Center will be the city's second public recreation facility funded by marijuana tax revenues. The facility will offer a strength training area, cardio equipment, swimming pools, a waterslide, a raised track and outdoor workout spaces. The project is expected to be completed in early 2023.

This article originally appeared in the April 2021 issue of Athletic Business with the title "Forward Progress." Athletic Business is a free magazine for professionals in the athletic, fitness and recreation industry. Click here to subscribe.