Regarding potential dangers, facility operators can't afford to stick their heads in the ground. 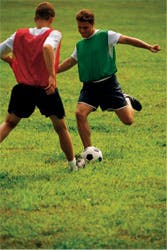 Soccer players While it is impossible to make any activity free of risk, the courts have imposed a duty on individuals who own and operate sports and recreation facilities to provide a facility that is safe for all of its intended activities. Facility owners are usually able to satisfy this duty by doing regular, periodic safety inspections and correcting any discovered defects. Sometimes, however, a facility operator's safety inspections fail to turn up any defects, and in the event a lawsuit is filed a court must determine whether the facility operator acted reasonably in his or her inspections of the facility. A good example of the legal issues involved in facility defect cases is Range v. Abbott Sports Complex [691 N.W.2d 525 (Neb. 2005)]. During a soccer game at Abbott Sports Complex in Lincoln, Neb., Christopher Range was running down the field when he stepped in "a small burrowing animal hole" about four to five inches wide. As a result of stepping in the hole, Range ruptured his patellar tendon. Although the game was 80 to 85 minutes old, and Range had arrived 20 to 30 minutes before the soccer match in order to warm up, he claimed that he never noticed any problems with the condition of the field or any holes, nor had anyone else ever mentioned seeing a hole. The referees working the game also stated that they had completed a walk-through inspection of the field on the day Range was injured. None of the referees noticed a hole on the field, nor had any of the players on the field warming up reported seeing a hole prior to the match. As a result of his injury, Range sued Abbott Sports Complex, claiming that the complex was negligent for failing to provide a facility that was free of defects and safe for its intended purpose. The hole, Range argued, was a defect that the operators should have known about or, in the exercise of reasonable care, should have discovered and fixed. In determining whether the Abbott Sports Complex breached its duty of care to Range, the trial court held that a possessor of land is subject to liability for injury caused by a condition on the land only if: 1. The possessor created the condition, knew of the condition or by the exercise of reasonable care would have discovered the condition; 2. The possessor should have realized that the condition involved an unreasonable risk of harm to the lawful visitor; 3. The possessor should have expected that a lawful visitor such as Range either (a) would not discover or realize the danger or (b) would fail to protect himself or herself against the danger; 4. The possessor failed to use reasonable care to protect the lawful visitor against the danger; and 5. The condition was a proximate cause of the injury. Applying the facts of the case, the trial court ruled that Range had failed to establish any evidence that the Abbott Sports Complex had constructive knowledge of the hole. In order to show that the complex had constructive knowledge of the hole, the trial court held that Range must satisfy the first of the above prongs of facility liability by demonstrating that the Abbott Sports Complex created the hole, had actual knowledge of it, or should have discovered it by the exercise of reasonable care. In ruling against Range, the trial court found that Range had not submitted evidence from which it could be inferred that the hole had existed for a sufficient length of time prior to the injury or that the Abbott Sports Complex had constructive knowledge of the hole. On appeal, the Supreme Court of Nebraska overturned the lower court. In reviewing the facts, the Supreme Court found certain facts indisputable. First, from the facts it was clear that a hole caused Range's injury. Second, from Range's description of the hole - four to five inches in diameter with grass growing around it but not inside it, and with no loose dirt around the perimeter of the hole - it was also reasonable to infer that the hole was not recently created. These facts, the Supreme Court of Nebraska ruled, supported a reasonable inference, not mere speculation, that the hole existed prior to the start of the soccer match. Therefore, giving Range the benefit of all reasonable inferences deducible from the evidence regarding the existence of the hole, the Supreme Court of Nebraska concluded that a genuine issue of material fact did exist as to whether the Abbott Sports Complex or its employees had constructive knowledge of the hole. The decision of the Supreme Court of Nebraska in Range illustrates two fundamental legal principles involved in facility liability cases. First, while facility owners and their employees do not have a legal duty to ensure the safety of all participants using the facility, they and their employees do have a legal duty to exercise reasonable care in inspecting the facility regularly for dangerous conditions, and when necessary to repair any defective conditions that are discovered. Second, facility owners and their employees cannot simply ignore potentially dangerous conditions at their facilities. If a facility defect has been present for a length of time and causes an injury, even if the facility owners and their employees did not have actual notice of a defect, the court will still impose liability on them for any injuries caused by the defect under the theory of constructive notice. For example, in the Range case, because Range was able to show that the hole was not new, the court was able to infer that had the facility and its employees exercised reasonable care in inspecting the facility or field, they would have discovered the defective condition.