A Harvard Researcher Focuses on Perps to Stop Crime in Parks

A Harvard researcher believes crime can be driven from parks by making perpetrators feel unsafe. 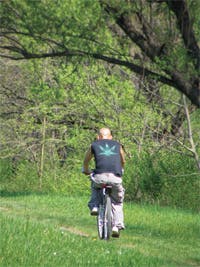 You've trimmed back tree limbs and bushes, installed path lighting and "crime watch" signs. And yet, you and your constituents are left feeling baffled and frustrated when your parks continue to function as havens of criminal activity - from vandalism to drug dealing to illicit sex.

Anne Lusk thinks she knows why.

Lusk, a longtime parks and trails advocate and now a visiting scientist at the Harvard School of Public Health, spent her Ph.D. years at the University of Michigan's school of architecture and urban planning studying human behavior in the built environment, particularly within parks and greenspaces. And when she would ask herself why people in some communities don't feel safe in their parks - and why criminals do - Lusk kept returning to the same fundamental point: Parks are predictable.

"We have not changed the design of parks in the United States since Frederick Law Olmsted created Central Park," says Lusk, referring to New York City's nearly 150-year-old landmark.

And over that span of time, drug dealers and pimps have fine-tuned their methods with little regard for the locals' welfare. "They know how often the police are going to come around, they know the park's lighting," says Lusk. "They know that the little grandmother sitting in her home on the street corner is scared stiff to come out and say, 'Stop doing prostitution here' or 'Stop selling drugs' or 'Stop shooting each other.' "

To counter the terrorism taking place in residents' backyards - or rather, their "front yards," as parks are often called - Lusk suggests recreation administrators step in to eradicate the predictable elements that make parks so appealing as sites for criminal activity. "A perpetrator of crime will hedge his bets upon the level of risk involved," she says. "You want to make sure that you up the ante."

Putting the pressure on criminals can be done any number of ways, the simplest of which may be to bruise their egos.

Lusk also suggests taking opportunities to surprise or embarrass criminals - near trash receptacles, in wooded areas, on lawns - basically, anywhere and at any time. Such strategies could include installing motion-sensitive sprinklers that activate when people enter the park past operating hours. "It's not going to kill them," she says. "But they wouldn't want a sprinkler to go on because it'll get them wet and make them look stupid."

Affordable, motion-sensitive security lights can also draw unwanted attention. "Imagine going into an area and having a big spotlight turned on you," says Lusk. "You wouldn't like it."

Another way to make visible those who might prefer to remain invisible is to announce their unsavory activities in parks with sound. Timer-operated or motion-sensitive audio devices playing recordings of dogs barking, hidden in, say, bushes or trash receptacles, can be effective deterrents for those who use parks to toss used intravenous needles or smoking guns. Of course, it's important to remember to periodically relocate the audio device - and perhaps, alter the sound itself - as to maintain unpredictability.

As odd as it may seem, nursery rhymes, too, might give criminals pause. Lusk points to a study in Holland in which researchers found that graffiti crime in subway stations plummeted when posters were hung recalling children's stories similar to those found in the "Dick and Jane" reading primers. "People didn't put graffiti up on them because it was this sacrosanct thing from their youth," she says. "Again, you make it unpredictable for the perpetrator. But you can also make it sort of fun for the innocent person who is there in the park and isn't bothered by that stuff."

All criminals were at one time children themselves. And while administrators may make efforts to keep criminals out of parks, they should also think about how to attract local youths to the parks - before negative elements succeed at pulling them in a different, more tragic direction. After all, in many cities young people are responsible for committing a significant percentage of crimes - from petty theft to drug-related offenses, or worse.

Community leaders commonly attempt to stem this tide by channeling youths' destructive energy into constructive activities, namely the perfunctory after-school programs during the school year (or day camps in the summer), plus a full slate of intramural sports. But Lusk wonders why such endeavors can't be taken a step further to help youths shape a new, positive self-identity.

Lusk envisions implementing in parks what she calls "prowess plazas," areas that provide young people an opportunity to showcase their athleticism, much like bodybuilders do on Southern California's famous Venice Beach, while passersby observe and interact. "It's neat to go there and see them lifting weights," says Lusk. "It gives people something to talk about."

And as in mid-20th century jitterbug and jazz clubs - where young people of different races interacted, shedding social stigmas in favor of an opportunity to show their best moves on the dance floor - Lusk believes that, if actively programmed with youths' input, prowess plazas have the potential to bring together people of all ages and backgrounds. "I've always wanted parks to be the equivalent of European plazas," she says. "At a prowess plaza - instead of sitting at café tables and looking at the beautiful, historic architecture, which you don't always have in this country - you showcase the healthy athleticism of the young kids, who otherwise could be the perpetrators of crime. So in the middle of the plaza, you may have a basketball court, and then you have tables or bleachers set up around it so people actually go to watch."

Whether youths participate in jump-rope competitions or organize basketball tournaments, Lusk's aim in elevating average kids to star status is that they gradually take ownership of their local parks.

"If you hire kids to work in a park, if they help coach and organize the games, figure out the scheduling and do the payroll, they will have a high sense of self-identity," says Lusk. "They will associate themselves with the park and say, 'We don't do bad things there because that's my home.' "