The seeds of successful turfgrass management are sown with off-season planning. 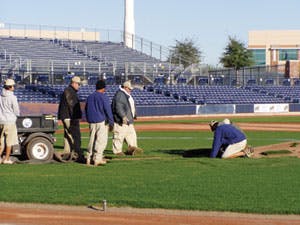 Although sports fields in many regions of the country are resting up for another busy season, that doesn't mean turf managers can afford to be equally idle. If anything, now is the time to ensure that fields are prepared for whatever might befall them in the coming months.

But planning ahead isn't always as easy as it sounds. Most sports turf managers are problem solvers - individuals more comfortable actually doing something in the field than just thinking about it behind a desk. "Too many people believe that when they're sitting in their office, they're not working," says Mike Andresen, athletic grounds manager at Iowa State University and president-elect of the Sports Turf Managers Association. "I think they just don't take the 'manager' part of their title as seriously as they should. There is a good quote that I wish I had understood a long time ago that I heard from Ross Kurcab, turf manager for the Denver Broncos: 'Failure to plan is a plan to fail.' It's true."

Failure to plan can be defined as anything from not having enough top-dressing on hand the week before a major tournament to being unprepared for extended periods of heavy rain or blistering heat.

"It would have been a challenge for anyone," Pamela Sloan, director of the Stockton Parks and Recreation Department, told The Record of Stockton in October. "Some courses actually shut down, while we remained open. We all learned some valuable lessons about planning for what might lie ahead." Indeed, Danny Fielder of ValleyCrest Golf Course Maintenance, which contracts with the city to maintain both courses, told the paper that new communication tools will be developed to more effectively keep staff members apprised of course conditions and needs.

When severe weather strikes, it's crucial to return to a regular maintenance schedule as quickly as possible, says Chris Calcaterra, sports facilities manager for the 145-acre, 13-field Peoria (Ariz.) Sports Complex, a city-owned facility that hosts spring training for Major League Baseball's Seattle Mariners and San Diego Padres, as well as several community leagues. "We know that if we're going to tarp a field for a day, diseases can get under there in a matter of hours. So we just stock some broad-based fungicides that we can spray when the tarps come off. We keep those on the shelves, because I don't want it to be 6 p.m. on a Friday when we find out we have a problem and have to wait until after the weekend to get the fungicide."

Keeping records of how much fungicide (or any consumable good) is applied to a given field not only provides a solid indication of how much product should be ordered from year to year, but also helps turf managers make future application assessments based on previous weather patterns. Andresen requires his staff of two full-time turf-maintenance personnel and up to five student assistants to provide written daily updates tracking such details as weather conditions, pest sightings, and mowing, aeration, fertilization and other treatments. Iowa State's log is nothing fancy. In fact, it's more like an informal journal than an official log. "Just tell me what went on weather-wise and what went on work-wise," Andresen says. "That way we can see how everything fits together at the end of the year and make adjustments for the following year. Years ago, I thought I could remember all this stuff. But I couldn't."

The behind-the-desk work doesn't stop with logs. Preseason preparations also should include making sure a facility's programming schedule meshes with its maintenance needs. "A lot of turf managers are struggling to get schedules from the operations department, and that will dictate the kind of fertilizing, top-dressing and field shutdown schedules they'll have," says Calcaterra, who was assistant field manager for the Atlanta Braves before relocating to Arizona. "A lot of our inventory is dictated by schedules."

Of course, maintenance tasks can't be completed if equipment isn't in working order. Because many turf managers also are chief mechanics, now is the time to perform preventive maintenance on mowers, spreaders, sprayers, aerators, tractors, top-dressers, turf sweepers and even hand tools. If a turf manager and chief mechanic are not one and the same, Calcaterra suggests creating "synergy" between the two individuals that he likens to that of "the airplane pilot and the mechanic."

Finally, if one is not already available, Andresen recommends developing a written program for each facility, field or site under a turf manager's purview. That way, all employees (and, yes, even a turf manager's eventual replacement) will be privy to both standard operating procedures and any unusual protocol. "A big reason I do that is so I don't feel like I need to be here every day," Andresen says. "If I need a day off for mental health or for whatever reason - or even if I just disappeared - the program is in place. The people who are here can continue without missing a beat. It also empowers my staff and gives them a feeling of ownership in the facility."

Andresen spent five years with the Class AAA Iowa Cubs in Des Moines before coming to Iowa State in 1996. Since then, the way he prepares for each season has evolved. "I don't have a formal plan, but experience has dictated what I do," he says. "When you're on your site for awhile, you're able to better predict things."

That said, Andresen won't go so far as to say that his program is on autopilot. "I don't think I'm at that point yet."