Bleacher Theft From Parks and Fields Attributed to Cost of Steel

Widespread bleachers theft from parks and sports fields is being attributed to dramatic spikes in prices for raw metals. 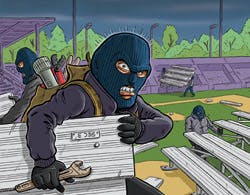 Imagine your stadium bleachers in a faraway land. It usually starts something like this:

The widespread theft of aluminum bleachers among other aluminum, steel and copper objects nationwide is being attributed to dramatic spikes in prices for raw metals over the past few years - a partial result, at least, of building booms in countries such as China and India. (As of March 1, raw aluminum was fetching about $1.28 per pound stateside.)

"We are seeing a lot of bleacher thefts," says Bruce Savage, vice president of the Institute of Scrap Recycling Industries, a nonprofit organization that represents more than 1,000 scrap-metal processing companies nationwide. "The prices for the actual commodities have just skyrocketed and it's making thieves target all kinds of things that you wouldn't think of as targets."

The bleacher heist is fairly routine - you need some tools and some wheels. "They had to have loaded up a truck with it," Akron police lieutenant Rick Edwards concluded in an October interview with the Cleveland Plain-Dealer after $10,000 worth of bleachers were pilfered from a high school football stadium. "They weren't carrying that stuff away."

From there, says Savage, the bleachers are often cut into smaller pieces, and mixed with other metals and recycleable material to create what looks to be legitimate construction debris. "If bleachers were brought into a scrap yard, they'd be pretty identifiable," says Savage. "But once they mix it up with other materials, it becomes something that's not going to raise a lot of suspicions."

In an effort to curb metal theft, ISRI has partnered with the National Crime Prevention Council to create a nationwide network (found at isri.org/theftalert), so that when bleacher owners report a theft, scrap dealers are alerted with descriptions of the stolen goods and other pertinent details. For what it's worth, most state governments have recognized the severity of the problem of illegal scrap dealing, and have either enacted or are considering legislation that requires metal buyers to more closely monitor their purchases through means such as photo identification and fingerprinting of the seller.

For those athletics and recreation administrators who don't want their bleachers to end up as siding for a New Delhi industrial building, Savage does recommend some further preventive measures, such as immediately notifying local police once a theft has occurred, and marking the bleachers with some kind of identifier, perhaps a colored school decal.

Apparently, bleacher owners aren't the only people who should keep a close eye on their property. Parks operators throughout the country have been losing benches, tables and any number of steel facility components to theft.

But the heaviest metal theft of all may have taken place in New Jersey in January. According to Newark Star-Ledger reports, a 50-by-30-meter stainless-steel pool worth $500,000 was purloined from multiple Woodbridge storage trailers earlier this year as its owner, a local swim club, was searching for a permanent location. The well-organized thieves passed on the pool's liner and mechanical equipment, a sign that the pool's steel was sold for scrap, Woodbridge deputy police chief Philip Dinicola told the paper in February. Besides, he told a Star-Ledger reporter, with "a pool that size, you're not going to put it in without someone seeing it."