Common sense drives the details when sports fields, courts and tracks are placed on top of buildings and parking structures. 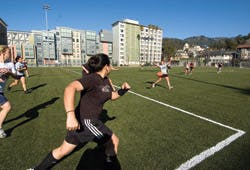 Hemmed in by dorms and a dining hall, UC Berkeley's slightly undersized Underhill Field rests atop a four-story parking garage.
Underhill Field, a carpet-style synthetic turf surface located on top of a two-story parking garage that was backed into a hill in the heart of campus, was a popular recreation facility at the University of California, Berkeley. Hemmed in by dorms on two sides, a dining hall on the third and busy College Avenue where the rooftop met the hilltop, the field was the site of intramurals and club-team practices, with soccer, lacrosse, field hockey and rugby balls whizzing into 25-foot-tall nets and clanking against a perimeter chain-link fence.

The 1989 Bay Area earthquake changed all that. Found to be slightly damaged and seismically unsafe in the event of a future temblor, the structure was demolished in 1993, and the lot stayed vacant until this past fall, when Underhill Field reopened on top of a new, seismically safe, four-story parking structure.

The new field is, like the old one, not of regulation size. Measuring 106 by 81 yards, it's lined for various sports and, unlike the old field, is an infill system that represents today's state of the art in synthetic turf manufacture. There have been a number of other improvements - there's an offset area for a small number of spectators, rest rooms, an athletic equipment storage room and a sidewalk plaza. But the surface is the aspect of the project that most sets it apart from the former field - it's sumptuous where the other was utilitarian; it gives the field primacy where it once seemed more of an afterthought to solving the on-campus parking problem. It also is designed to provide better drainage than fields of the past - a huge consideration when placing a playing surface up on the roof. 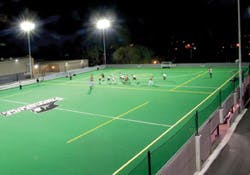 This half-on-roof, half-on-grade NCAA-regulation lacrosse/field hockey field at Providence College won an award for its engineering.
Rooftop playing surfaces are most often born of necessity, dictated by a tight site that prevents the side-by-side accommodation of both a field and a structure. A number of such projects pair sports surfaces with a parking structure; in some cases, the parking structure sits completely below ground, with the "rooftop" field located essentially on grade. In yet another permutation, the building site is sloped (as with Underhill Field), and the playing surface is placed partly on grade and partly on the structure's top.

North Central High School in Spokane, Wash., followed this latter blueprint during the rebuilding of its campus in 1980, although the school's subsequent history shows the danger of poor engineering when stacking sports surfaces on top of other building components. According to athletic director Scott Harman, the then- 75-year-old building was "falling apart," and initial plans called for a new school to be built on a wide-open site several miles west of its original location. However, alumni and booster groups insisted that for reasons of tradition, the school be rebuilt within roughly the same footprint. Locked in by surrounding commercial and residential neighborhoods, a new gymnasium was backed into a slope, along with an "industrial arts" classroom wing, and 10 tennis courts were constructed that, because of the cramped site, partially spanned the gap between the grade on the high end of the hill and the roof of the industrial arts wing. The gym's roof, meanwhile, was overlaid with a brick cobblestone patio.

"District engineers tried putting in irrigation and drains, but we had drippage in the gym from the day the building opened," Harman says.

In 2001, an addition was built - the construction necessitated the removal of several of the on-grade tennis courts - that accommodated an auxiliary gym and, above that, a science wing. That roof leaked, too. A 2003 capital improvements bond gave the district $4.8 million to solve its moisture and mechanical engineering problems; in 2006 the district replaced the building's HVAC systems, and removed the remaining tennis courts from atop the building so the leaky roof over the industrial arts wing could be replaced. The gym's leaky roof was also replaced.

Harman reports that this most recent repair appears to have put a stop to the leaks. But the surviving tennis courts behind the addition, two of which slightly overlap the building footprint, remain problematic.

"It's much better inside," Harman says, "but outside, the courts right at the border of the roof have cracks so massive that we can't use them for varsity sports." 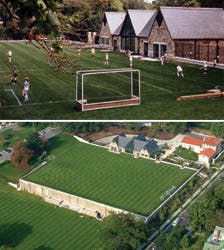 Steel trusses endure the weight of the grass soccer field atop the Underwood Athletic Center at the National Cathedral School for Girls in Washington, D.C.
The engineering theory involved in such half-on/ half-off applications is not that complicated. On the other hand, projects of this kind - assuming they solve the problems of drainage and differential settlement - can be award-worthy. One such project, a parking structure topped with an NCAA-regulation field hockey/lacrosse field that debuted in 2005 at Providence College, earned a Gold Award of Engineering Excellence from the American Council of Engineering Companies of Massachusetts for engineering firm Symmes, Maini & McKee Associates of Cambridge, Mass., in association with sports surfaces consultant JJA Sports of Westford, Mass. The sloped building site, located adjacent to the college's Peterson Recreation Center, had included a surface parking lot at its lower end that college administrators were eager to keep. Therefore, the decision was made to grade the higher end of the site, construct a multilevel parking garage and span the field from grade to the garage rooftop.

Adding a field alters the typical design of a parking structure, notes Geoff Adams, a principal with Stantec Inc.'s San Francisco office, designer of Berkeley's Underhill parking structure. Specifically, rainwater is almost universally drained from field-less parking structures toward the middle of the concrete slab, whereas those with fields must be slightly crowned so water flows away from the center. What made the Providence project tricky, says Richard Croswell, a senior structural engineer and principal with SMMA, was that the different subbases used at each end of the parking structure (concrete and native soils) required different approaches to solve drainage and settlement issues, while at the same time care had to be taken to make field performance uniform.

The design team's solution was a perimeter trench drain system that was utilized in conjunction with a series of perforated panel drains that together allow water both to drain through and run off the surface. The focal point of the designers' efforts, however, was the transition zone where the parking structure ends and the graded portion of the field begins. At the midpoint of the field, where the waterproofed basement wall signals the structure's terminus, three feet of super-porous drainage material was added to the base of the wall, and a heavily reinforced, hinged concrete slab was poured along the top of the wall that extended 15 feet over the compacted soil and engineered stone subbase.

Croswell says that previous projects of this kind that he's aware of have experienced drainage-related problems, but Robert Johnston, a principal with Cannon Design in Victoria, B.C., can point to a 20-year-old facility that used much of the same engineering treatment of the garage, grade level and transition zone, and today is functioning well with its second playing surface. The University of Alberta's Lister Field is a synthetic turf field about 80 percent on the roof of a parking structure and 20 percent on grade. Johnston says that what particularly accounts for the project's long-term viability is that the field was laid according to modern standards, rather than those prevalent in 1988.

"Carpet-style fields in those days were normally glued down, but we utilized a sand-filled, loose-laid turf over a premanufactured pad, which is more consistent with the types sold now," Johnston says. "We didn't go with a glue-down field because we didn't want to get wrinkles and problems when the building moved. That's the big challenge when you extend off the roof - buildings tend to move, and fields move too, and you have to allow for that movement in your system design." 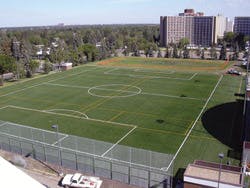 Eighty percent of the University of Alberta's 20-year-old Lister Field sits on the roof of a parking structure (foreground), 20 percent on grade.
Not all rooftop playing surfaces are synthetic, although placing a grass field atop a structure is inherently more difficult, largely because of the weight of the drainage base and soil profile. It's also significantly more costly because of the added structure necessary to hold all that extra weight.

John Boekelman, an associate principal at Cannon Design's Grand Island, N.Y., headquarters, led the engineering team on the Agnes C. Underwood Athletic Center at the National Cathedral School for Girls in Washington, D.C. (a 2003 Athletic Business Facility of MeritTM winner). Located below grade and buried on three sides, the Underwood center features a full-size grass soccer field on "at least 10 inches of soil and another 10 inches of drainage gravel, insulation and waterproofing," Boekelman says. "After all, if you're going to go to that much trouble you want to make sure you have a good growth medium and a good field in the end."

Where a synthetic field may weigh in the single digits in pounds per square foot, a grass field of the quality of the National Cathedral School's weighs between 250 to 300 pounds per square foot. For that reason, the center was built using steel trusses that span 115 feet above the competition and auxiliary gyms (as well as its smaller spaces), the stiffness of the steel holding the weight and ensuring that users of the field feel they're on solid ground. The roof, meanwhile, is pitched to the back so that water percolates into the ground rather than pooling on the roof - a guard against leakage but also against additional water weight. The down side of scrimping on drainage during construction should be obvious. "The last thing you want to do," as Boekelman says, "is to have to dig up that thing."

That sort of common sense rules the design and construction of all these types of projects, Johnston says. It's the reason a grass field contractor doesn't drive heavy equipment or stockpile stones and soil on the roof when building the drainage system. It's the reason parking structures are crowned so that drains don't sit under synthetic turf. And it's the reason fences, padding and nets protect players, passersby and nearby buildings.

It's also the reason why stacked fields dating back as far as 1981 - such as Warner Roof, the field hockey pitch atop Brown University's Olney Margolies Athletic Center - continue to perform well to this day. Or why Lister Field's first synthetic surface enjoyed a life span of 16 years. Says Johnston of that long-ago project, "What we did with our surface 20 years ago was more cutting edge than what the industry was doing at that time, but these projects are pretty straightforward. You have to do some really logical things in terms of water management underneath the field, then you put a system on that's loose-laid, and then you detail it. In my mind, it's really simple."