Entire synthetic turf fields are now being recycled upon request. 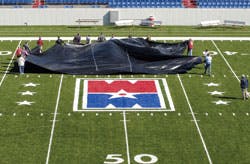 TOURS OF DUTY The original FieldTurf installation at War Memorial Stadium has been removed, replaced and recycled.

Synthetic turf manufacturers are quick to point out how green their products are compared to pesticide-dependent, water-guzzling natural grass. One field builder estimates that synthetic turf spares billions of gallons of water and millions of pounds of fertilizers and pesticides from being applied to the soil of natural grass fields every year, while preventing hundreds of thousands of pounds of carbon from being spewed from turf care equipment into the atmosphere. The recycled crumb rubber in a typical football field will prevent between 18,000 and 20,000 car tires from being rolled into landfills.

So what happens to all that man-made material once a synthetic field has reached the end of its own useful life? A new and innovative removal and recycling method allows a removed field's materials to be ground, pelletized and reconstituted into all sorts of products - from school bags to the lining of highway barrels - in addition to materials for synthetic turf applications. Salvaged synthetic turf components can even serve as topdressing on natural grass fields.

But never before had an entire field been removed and recycled - until earlier this year. In June, War Memorial Stadium in Arkansas was outfitted with a state-of-the-art synthetic surface, and the synthetic field that it replaced was completely recycled - an industry first, according to FieldTurf, the manufacturer of both fields. "We couldn't be prouder that our surface will represent the first artificial turf field to be fully recycled," stated War Memorial general manager Charlie Staggs in a FieldTurf press release.

The company's "Take Back" program recycles fields upon request from clients who replace the field with another one manufactured by FieldTurf. "It's all about the recyclability of the materials used," says company spokesperson Jason Smollett when asked what makes the original field recyclable. "This validates the use of recycled crumb rubber as the greenest infill available."

That notion recently survived the regulatory microscope. In 2008, elevated levels of lead were detected at a synthetic field in New Jersey, but studies conducted by the Environmental Protection Agency and the Consumer Product Safety Commission determined such fields to be of no significant threat to users. In fact, one forensic toxicologist cited by synthetic turf manufacturer Sprinturf estimates that a 50-pound child would have to ingest more than 100 pounds of synthetic turf to be at risk of absorbing enough lead to equal 600 parts per million - the minimum federal threshold of elevated blood lead. Moreover, the styrene-butadiene rubber used to make car tires (and infill) is also used without question in the manufacture of sponges, sports balls, garden hoses and even chewing gum, according to Sprinturf's web site. Studies examining its impact on air and water quality have likewise found synthetic turf to be environmentally harmless, adds FieldTurf's Smollett.

It should be noted that independent tests on the hardness, heat and bacteria-harboring potential of synthetic turf continue. However, with the ability to recycle not just crumb rubber, but all field components, it can be safely said that the synthetic turf industry is getting greener all the time.