The Westport (Conn.) Planning and Zoning Commission, in granting the Installation of permanent lights at the Staples High School football field in November, brought to a close nearly 35 years of often-contentious debate between city leaders, sports boosters and school neighbors over spill and glare issues. 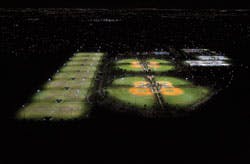 The Westport (Conn.) Planning and Zoning Commission, in granting the installation of permanent lights at the Staples High School football field in November, brought to a close nearly 35 years of often-contentious debate between city leaders, sports boosters and school neighbors over spill and glare issues. Considered a historic achievement locally, the agreement calls for field lights to be on until 8 p.m. during the week for games and practices between September and December, while also allowing them to be used for eight special events during the year and two Saturday events.

That story makes Gordon Holmes laugh. "You know what's happened in 35 years? Lighting went from old incandescent lamps to metal halides to LEDs," says the president of RLS Lighting in Hallandale, Fla., one of a number of companies that have steered the outdoor sports lighting industry away from massive pre-aimed and unshielded floodlights that illuminated far more than the playing field toward automated, more efficient and effective lighting systems that aim to please facility operators, athletes, spectators and the neighbors who claim a sports complex is an invasion of privacy in their own backyards. (Although sustainability proponents advocate the use of LED lights in as many applications as possible, they are still cost-prohibitive as outdoor sports field fixtures.)

There's no doubt that light pollution remains a major concern in communities around the country. In one high-profile decision in California, the Los Angeles County Board of Supervisors is likely to approve a dark skies ordinance early this year that will (as do other such rules nationwide) crack down on overly bright or obtrusive lighting. According to the Los Angeles Daily News, the ordinance is intended to conserve energy while preserving the character of the county's rural areas as new developments surround them. Among other things, it would require outdoor sports facilities to use fixtures that better reflect and contain light.

"Spill will always be a major point of contention, because it can be a nuisance to neighboring homes and communities," says Bill Smith, vice president of sales and marketing for Qualite Sports Lighting, headquartered in Hillsdale, Mich. "Many fields and parks exist within neighboring communities, and with the ever-growing population and the limited number of fields to play on, there becomes more of a need for lighting so that these fields can meet the demand of people and teams requesting their use."

Forget about foot-candles and luminous intensity; outdoor sports lighting is bright, and that's all residents need to know to get upset about the installation of multiple 70-foot-tall light poles in their neighborhood.

"If you go to a public hearing and people start talking about lights, they don't typically say, 'I don't want half a foot-candle of spill light in my yard.' They say, 'When I'm sitting in my home eating dinner or watching TV, I don't want that glare ball blasting through my blinds or drapes and creating an unpleasant environment,' " says Matt Ellenberger, marketing manager for Oskaloosa, Iowa-based Musco Lighting.

Three issues related to outdoor sports lighting - spill light, glare and sky glow - typically are at the root of neighbors' concerns. Spill light is the light that trespasses or "spills" off the intended areas and illuminates adjacent property. Generally considered unwanted light, it surprisingly is not the main object of neighbors' scorn, lighting manufacturers claim. That honor goes to glare, a subjective term that refers to the sensation experienced when looking into an excessively bright light source that causes a reduction in the ability to see. This not only impacts the lives of neighboring residents, but the performance of players, who can easily lose fly balls to glare. Sky glow is the light that overflows into the sky above the horizon and illuminates moisture and other tiny particles in the atmosphere. It is more visible on some nights than others, depending on atmospheric conditions.

All three are credible concerns, manufacturers admit. "When you have so much illumination on, say, a soccer field - maybe four poles down each side with 100,000 lumens of light - that light can be really intense," says Holmes, who works with municipal, commercial and residential clients on outdoor sports projects.

Defusing spill, glare and sky glow issues led to the gradual development of lighting systems with better shielding and improved reflector designs beginning in the 1980s. As a result, the quality of field lighting for players and spectators also has improved considerably. Because spilled light equates to wasted energy, advanced light-control technology redirects wasted spill light back onto the playing surface and increases light on the field. By better controlling light from each fixture, Ellenberger says, fewer fixtures are needed to get the required amount of field lighting. This, in turn, reduces maintenance and operation costs.

"We believe that you ought to try to accomplish improving spill and glare control by making the fixture as efficient as possible," he says. "But it is still possible to dramatically reduce the amount of spill light, glare and sky glow in a way that is highly inefficient and uses a whole lot of fixtures. The reason we know that is because many years ago, we did just that when we were first starting out as a company."

Even the best fixture technology can be misapplied and create problems. Contrary to what some residents may contend, lowering light-pole heights will not help contain spill, glare and sky glow. Taller poles allow for better aiming angles - especially with the use of visors or shields - and additional poles may also be used to help reduce floodlight distance requirements, thereby providing steeper aiming angles and more effective use of external shields. 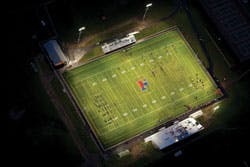 Since the introduction of shields, the outdoor sports lighting industry has continued to evolve. Musco's Light Structure Greenâ ¢, which debuted in 2005, controls lumen output with customized optics and Smart LampÂ® technology to precisely aim and illuminate fields while also reducing spill, glare and energy costs by up to 50 percent, according to the company. "The concept of shaping the light with inserts in the fixture was a component in the previous technology, but the inserts were only in the bottom portion of the fixture," Ellenberger says. "That concept evolved into using the inserts to produce a fully customizable reflector and visor system."

Similarly, Qualite's Gold Series and International Series expand on previous technology. The Gold Series uses a specular-finish reflector with a slightly longer visor than the company's standard Pro Series, providing for greater spill and glare control, while the International Series boasts a double-ended lamp with a deeper reflector that creates a tunnel-of-light concept to better pinpoint illumination targets. It also incorporates an external visor to further shield unwanted light.

"We are continually customizing our fixtures to solve certain spill challenges," Qualite's Smith says, adding that the company recently launched the Green Star Seriesâ ¢, an electronic ballasted fixture series that will take efforts to reduce spill and glare to the next level. "The electronic ballast increases more light per fixture, allowing for fewer fixtures to light the field. Less sources of light ultimately will result in a reduction of offsite spill and glare."

But unless there are no lights at all, some neighbors will still complain. As outdoor sports lighting manufacturers and facility operators have learned, you can't please everyone - but you can do everything possible to at least ease their concerns. Sometimes all that takes is simply communicating to community members at a public meeting the amount of intended use the lights will get and the economic and recreational benefits that come with having a lighted sports facility in the area. That type of message can go a long way to soothe neighbors' qualms about a given project, Ellenberger says.

The potential impact of spill light generated by a proposed lighting system also can be calculated in advance of installation using lighting design software, further placating residents who are worried about being kept awake by an extra-innings adult-league softball game on a random Thursday night.

The performance of proposed lighting systems, including the type of luminaire specified, can be modeled using lighting equipment photometry provided by equipment manufacturers. Pole locations and heights, luminaire quantities and beam spreads are selected and plugged into the computerized model. Property lines are identified, and the amount of light trespass around the facility is calculated. The lighting designer can even run calculations based on different criteria, such as horizontal light (which falls on a horizontal plane or surface, such as a playing field) or vertical light (which falls on a vertical plane or surface, such as a fence or wall).

Once the lighting system is installed, spill light is measured using a standard light meter, and readings are checked against the performance projections generated by the computer model. Field operators may then solicit input from local residents and provide additional adjustments to the aiming of lights to further minimize problem areas that have been identified.

Among the key factors in Westport's long-in-coming agreement to operate lights at Staples High is the establishment of specific time restrictions. Leaving lights illuminated past the time they are needed for use not only irritates residents but also may violate some municipal ordinances. The tried-and-true way to adhere to a designated "lights out" time is through automated controls that can be scheduled and maintained online, remotely via smartphone or through a telephone service. "Oftentimes, large parks will have the lights automatically set up to come on, say, at 7 p.m. every night and turn off at 10:30 p.m.," Smith says. "What if it rains or a team cancels? The remote unit allows for a user to call in and override the system and shut off the lights. This can help neighborhoods be comfortable knowing that lights aren't going to stay on when no one is around."

Additionally, dimming systems can be specified for fields that require higher levels of illumination for higher classes of play. Typically these systems only need to be operated at full output a small percentage of the time. Reducing lighting levels during the majority of field events minimizes the amount of light cast into surrounding areas, as well as the facility's energy consumption.

Collectively, it's all enough to convince communities that would have spurned sports field illumination five years ago to finally see the light. "People can now see on a regular basis in their communities what is possible for lighting, which I think helps them understand that they can have less glare, less sky glow and less spill light in their backyards," Ellenberger says.

But Ellenberger also warns against facility operators, municipal leaders and other project stakeholders becoming too complacent in their efforts to get local residents to buy into a lighting project. "If you're going to invest the kind of dollars that it takes to put in lights - and in some cases that can be $75,000, $750,000 or millions of dollars at parks and high schools, and much more than that at colleges and universities - it's worth taking the time to learn a little bit about the lighting components, the application and what elements of the project are going to create issues for neighbors. That way, when things do get heated in a public hearing, they are well educated on the decisions they've made. Being educated about the issues is an essential piece of making the project successful."