One of the more popular seminars attended by industry professionals at the Synthetic Turf Council's March Spring Membership Meeting in Las Vegas didn't boast a sexy name or even a call to action. 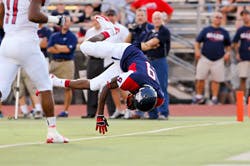 One of the more popular seminars attended by industry professionals at the Synthetic Turf Council's March Spring Membership Meeting in Las Vegas didn't boast a sexy name or even a call to action. Simply titled "STC Guidelines for Synthetic Turf Performance," the session detailed the organization's new performance guidelines (introduced in December), which include applicable testing protocols for multipurpose sports fields. The FIFA-endorsed guidelines encourage periodic and voluntary shock-attenuation testing to indicate the type of maintenance that should be implemented to maximize field performance; if a field is not performing within the desired range despite targeted maintenance, that field may soon need replacing.

"This is a major development for the synthetic turf industry," council president Rick Doyle says, noting that the guidelines cite a maximum G-max of 165, rather than the previously accepted 200 Gs, resulting in greater shock absorbency and increased safety. (Lower G-max values indicate a less-severe impact and lessen the likelihood of a traumatic brain injury.) "For the first time, we are stating something different than the U.S. Consumer Product Safety Commission and the ASTM."

The guidelines come at a pivotal time in the evolution of synthetic turf, one that is seeing the re-emergence of the shock pad - an underlayment typically ranging in thickness from five-sixteenths of an inch to one inch that is placed between the turf and stone base and usually takes the form of either a prefabricated layer of rubber and urethane or a poured-in-place conglomeration of materials. Fields installed following the introduction of elaborate infill systems that promised the same playability as natural grass are now nearing the end of their typical eight- to 10-year lifespan or (depending on how well they've been maintained) are in need of significant infill redistribution. "With an infill-only system, you have to monitor the uniform depth of infill throughout the field," Doyle says. "And since infill can migrate, particularly in front of goals and other areas where play is heaviest, it's important to redistribute the infill and in many cases supplement it. So underlayment provides uniform resilience, in addition to the resilience provided by the infill."

Moreover, synthetic turf manufacturers are noting a desire by some facility owners to reduce the amount of infill (and subsequent infill "splash") by lowering the height of the fiber pile and increasing the density of the pile itself. Adding a shock pad, some of which also provide basic drainage properties, helps make up for the infill reduction. And then, of course, there's the elevated recognition of the dangers associated with concussions, which has forced facility operators to re-evaluate everything from sideline operations to field performance.

All of these factors are driving demand for what Greg Norfleet refers to as "an insurance policy." "People can still get a good G-max without a shock pad," says the business development director for the athletic division of American Wick Drain, which manufactures a shock pad with a built-in multidirectional drainage system. "But there is an awareness out there now that, in turn, is making people design their fields with that insurance policy in mind."

"The new Synthetic Turf Council guidelines are aimed toward performance," says Latasha Pittman, director of marketing and communications for Mondo USA Inc., a manufacturer of turf systems and underlayment. "Shock pads do not drastically improve the performance, but they do improve the consistency of the performance throughout the field."

Dan Sawyer, founder and chief executive officer of Brock International, another manufacturer of a combination shock pad and drainage system, claims underlayment also prolongs the life of the turf and reduces the number of traumatic brain injuries occurring on a given field. "Natural grass will provide a G-max of about 100 Gs, on average," he says. "Synthetic turf, when you buy it, will be about 120 Gs. But over time, it will go up to 160 Gs, 170 Gs. When you're on a field that's 100 Gs, you have half the likelihood of sustaining a head injury than you do on a field with 165 Gs - the very typical G-max of a five-year-old synthetic turf field. That's why we're starting to see the shock-pad market grow."

While underlayment manufacturers welcome renewed interest in shock pads, some synthetic turf suppliers point out that they are still used in a minority of installations. "We do not believe that we are seeing a trend," says Darren Gill, vice president of global marketing for FieldTurf, which makes a turf system with a 2.5-inch pile height over 9 pounds of heavyweight infill per square foot. "About 10 to 15 percent of projects use some sort of pad or underlayment. We typically see pads installed under fields with lightweight infill systems of less than 6 pounds of infill per square foot and shorter-pile turf systems of 2 inches or less. Pads are an ideal application for multipurpose recreation installations that have high use and limited ability to provide proper maintenance."

"Separate shock pads became scarce after the full introduction of third-generation turf systems, which were tall-pile, heavily infilled systems," adds Troy Squires, global vice president of sales and marketing for AstroTurf. "The concept was that the 'pad' was contained within the infill itself, in the form of rubber granules mixed with or layered on top of sand. Over time, some of these initial fields showed poor shock-attenuation levels and had to be extensively maintained or deep groomed. Certain professional teams and others chose to install padding under the turf when replacing these initial fields; however, a widespread move toward padding under these fields has not occurred."

Other turf manufacturers, such as Mondo and Shaw Sportexe, have developed their own underlayment systems to go with an entire synthetic turf package. "We recognize an appropriate underlayment specified as part of a complete engineered system can provide additional safety and performance benefits," says Tom Enright, divisional vice president of Shaw Sportexe. "Too often, we see the turf system and underlayment selected in isolation from each other."

That's why it's often up to project designers, turf builders and even savvy facility operators to suggest a shock pad be part of a given project. Such an addition can increase overall cost by an estimated 75 cents to more than $1.50 per square foot (depending on thickness and drainage properties) - boosting the price tag for an 80,000-square-foot field significantly, although Sawyer suggests the additional cost is nominal given the total price of the field.

"The predominant voice in the industry is the field manufacturers," says John Aten, vice president of sales and marketing for Regupol America, an underlayment manufacturer. "And until the day one of them says, 'All fields need a pad,' there will be a bit of disjointedness. There's always going to be a battle because of the extra cost, but I think people's eyes are open now, particularly those in the facility design specification market."

Adds Doyle, "Education is a crucial component of the sales process, and as product offerings grow in their technological sophistication and their breadth, I think it's becoming more helpful for buyers to have input from architects, engineers and independent consultants. The buyer should not be left to figure out for himself the advantages of the different offerings that he is considering."

But - as the synthetic turf industry has recommended all along - buyers can certainly contact operators of the type of field they are considering (with or without a shock pad) and look at its performance over the course of its life. Right now, Aten says, some of those fields may be reaching the end of their playability. "You've got to look at the earlier generation of fields and ask, 'How did that all go?' " he says.

Shock pads can outlive their original fields, too, and serve as the underlayment for a second or even a third field. "Existing elastic layer pads are not being removed when new infilled turf fields are installed," AstroTurf's Squires says. "Their removal used to be common practice, but the industry seems to agree now that having a shock pad, especially one that is already in place, is preferable."

The longevity of pads reaches back to the product category's roots overseas. "One of the reasons we know this trend is coming is because the same thing happened in Europe," Brock's Sawyer says. "Europe was a market that was laying turf over rock bases for years. It's an older, more mature market than ours, so it went through its turf-replacement cycle before we did."

"The market has evolved from having to use a pad because of the style of turf, to not using a pad because of the infill components, back to needing to use a pad because of no infill, less infill or different types of infill that are less resilient," says American Wick Drain's Norfleet, who used to sell the original short-pile AstroTurf surface and visited Europe for industry-education purposes during those early days of underlayment usage. "Underlayment use is still the exception and not the rule, but it's getting closer to the rule by the year."

As that use increases, so too does competition in the marketplace - and that's a good thing, according to the STC's Doyle. "We've had significant growth in our membership from that segment," he says. "Manufacturers of underlayment systems see the U.S. market as a great opportunity for them - one that is positioned to develop much more than it already has."