Your eyes are on the athletes as they run, jump, slide, swing. The surface beneath their feet slides by, mere background. 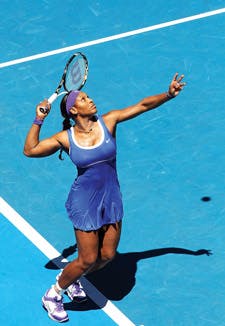 Your eyes are on the athletes as they run, jump, slide, swing. The surface beneath their feet slides by, mere background. At least, that was the case when synthetic surfaces for sports as diverse as baseball, tennis and football mimicked the natural varieties' hues, primarily deep grass green and red clay. These days, your gaze might be distracted by passing swaths of bright blue, fiery red or orange, or deep purple.

That was what World Team Tennis intended when it began play in May 1974 using multicolored tennis courts that promised to shake up the tennis world. (It failed; the initial league died in 1978.) It was also what Boise State University had in mind when, in 1986, it selected a blue synthetic turf field as a way to bring notoriety to its football program. (Put it this way: At the time, there wasn't anything notorious about the product on BSU's field.)

Such colorful statements haven't really caught on in the NCAA, but they've taken hold in the world of professional tennis - which, for all its marketing of its star athletes as swashbuckling trendsetters and oversize personalities, has a deserved reputation as a conservative bastion. Legendary for its resistance to change, the sport has embraced a big one in the past decade: The sudden proliferation of courts in a variety of colors that challenge the grass-green hegemony.

Decisions by a number of high-profile tournaments to surface their acrylic courts with a particular shade of color that they hoped would announce their tournament "brand" at a glance have led to a trend with topspin - it's coming at suppliers of all types of tennis surfaces from all angles, and gaining speed.

"The typical pro court is now blue," says John Graham, managing director of Andover, Mass.-based DecoTurf. "We've seen a huge swing - now we have standard light and dark blues, Olympic blue, Australian Open blue. The China Open is two shades of blue, and that's considered maybe a fifth Grand Slam." He pauses, recalling the former chief executive of the United States Tennis Association who led the charge to shift the color associated with the U.S. Open to blue in 2005. "God bless Arlen Kantarian. When he made the switch, it helped our business simply because a lot of people decided to resurface ahead of the time they really needed to, just because they wanted to have the U.S. Open colors." 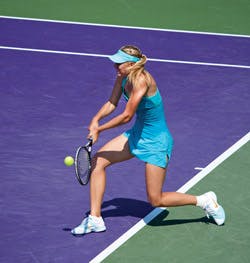 Maybe it started as mere marketing. But the trend has caused a general reappraisal of what tennis surfaces can be, or ought to be. Or, even, should have been all along - since a primary discovery by tennis players and television producers, which has helped drive the trend, is that blue and purple offer better contrast with optic yellow tennis balls.

"When we did the research for the USTA, we found there was a lot of science to it," says Graham. "Those colors are approximately 180 degrees opposite of yellow on the color wheel. With blue and purple, you are creating the most contrast you can for players, spectators and the TV audience."

Players interviewed by The New York Times a year ago were mixed in their opinions of the trend in surfaces - not wanting to mess with tradition, but admitting that they had a much harder time following the flight of the ball on the grass of Wimbledon and crushed brick (the material used to make "clay courts") at Roland Garros, home of the French Open. Interestingly, while the U.S. Open's blue hardcourts already fit the view of "traditional" surfaces, players were aghast when talking about the Madrid Open's experiments with a blue clay surface. "I wouldn't say I prefer a blue clay court," Kim Clijsters said, "because that just wouldn't be natural." (Television executives disagreed only on whether Wimbledon's pale green to beige hues or the French Open's dusty red tones at dusk made for worse viewing.)

A key color consideration for facility owners, Graham says, is how the hues will appear to change over time, either because of light conditions on the site or the inevitable fading of the surface caused by the sun. U.S. Open officials initially considered bright red and blue courts, for example, but were dissuaded by concerns over how the red would appear after beginning to wash out. This, in spite of the fact that larger tournaments resurface courts annually, Graham says - and also, in spite of the difficulty in spotting the gradual change.

"You wouldn't get a complete whiteout, and most people won't necessarily see it because the fade is uniform," Graham says. "It's not like you'll have half the court in shade and half in sun. If you did, it would typically be in the northern climates where the angle of the sun is a lot lower, and then you wouldn't get that type of UV degradation anyway." Tennis's literal hotbeds - Southern California, Arizona and Florida in the United States - will tend to experience color fading more quickly, but even that is subject to local conditions. In India, for example, large amounts of dust in the air can actually serve to protect surfaces from the effects of the sun, Graham says. 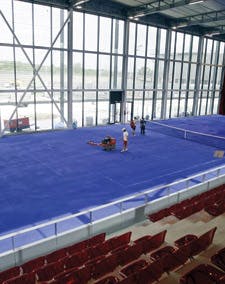 Virtual changes in surface color are another issue. Facility owners who opt for certain colors may find that the angle of the sun at different times of the day or how spectator seating, artificial lighting or cameras are situated will make colors appear different - purple to blue, green to brown - to spectators in person or on TV. A dark blue/light blue combination couldn't pass muster at the Athens Olympics, Graham says, because at certain times of day or from low angles, the light blue appeared silver on television.

Glare, too, is a potential problem area with all that sun, particularly where lighter colors are concerned. Doha, Qatar, which has achieved that elusive notoriety with its purple and lime green combo, has a few observers wondering how the players can see the ball without sunglasses. "It's just so bright, Graham says. "It's like skiing."

Light colors are also an issue in municipal and school applications, where facility owners may have less control over who uses the courts during off-hours. Some communities have long experience with trying to keep skateboarders and inline skaters off their courts, or in getting neighbors to accept the importance of proper footwear. Darker blues, purples and greens will tend to hide marks made by black-soled shoes, even in high-use areas such as along the baseline and in the service boxes.

Dark colors, however, will hold heat more readily than light colors, a not unimportant consideration to facility owners concerned with participants' health and architects concerned with gaining LEED points. Graham, who notes that dark green, blue or purple courts will hit 140 degrees on a 95-degree sunny afternoon, personally has not warmed to colors that meet solar reflective index LEED points - "typically a light red or a godawful-looking green," as he puts it.

The cutting edge in acrylic tennis court sustainability is finding a concrete or asphalt topcoat - used to fill voids and level the surface before the acrylic topcoat is applied - that can be made in a color other than black. Graham says that early tests indicate that even though this coating is used underneath the colored topcoat, a white acrylic formulation does appear to lead to a reduction in surface temperature. One question is whether the percentage reduction is significant enough to convince people to use it; another is whether a lighter-colored subsurface coat will sap the boldness from the new, brighter topcoats. Says Graham, "Black is much better from a color standpoint." 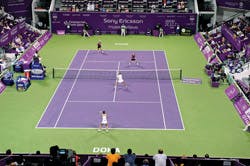 Bright, multicolored hardcourts have gotten the lion's share of the recent ink, but the changes in tennis have cut across all types of surfaces. In addition to the Madrid Open's blue clay (selected to match sponsor Mutua MadrileÃ±a's corporate color), other events played on crushed brick have included the Family Circle Cup (a traditional style of green clay court made by Har-Tru Sports of Charlottesville, Va.), the U.S. Men's Clay Court Championships (maroon) and the Copa Sevilla (yellow).

Makers of modular-tile courts have experienced a similar, but slower broadening of tastes in residential and smaller commercial markets. "We used to do 90 percent of our business red and green, maybe 5 percent green and green," says Gabe Martini, sales manager with Mateflex of Utica, N.Y. "It's gone away from green inside terracotta; we just redid the rooftop courts and track at NYU's Coles Sports Center in purple and graphite to match the school colors. Blue inside green seems to be a popular concept, mainly because people see it on TV and like it. But the reality is that TV likes the blue. They've kind of forced the trend to that color because it makes good TV."

Martini estimates that green-green or green-red still combine to hold between half and three-quarters of the market, mainly because of residential and municipal applications where the owners want to keep what he calls "a low profile." Still, he says, he and other sales reps have to step in more often these days, to perhaps dissuade a court owner from choosing garish or excessively loud color combinations - for example, the orange and black court his company built in the yard of a rabid Syracuse University fan. "If we see that someone is setting himself up for failure, we certainly will recommend something else," Martini says. "We might say, 'In my opinion, those two colors don't work well together.' "

Virtually all court manufacturers' websites now feature a court-coloring application that allows users to click the in-bounds and out-of-bounds areas to give them an idea of what standard colors will look like in combination. You might not be able to bring up the exact shade of gray inside light blue you saw at the Stockholm Open, but close enough.

Jeff Vance, global sales manager for Salt Lake City-based SnapSports, says that even though manufacturers can offer every color combination under the sun, he expects to see mostly what is televised - blue-blue, blue-green, purple-green - or what is traditional, rather than esoteric combos like fuchsia and teal. "The trend that started probably six years ago, purples and blues, is still strong," Vance says, "just because I think for most people, the ball picks up easier on a blue background. Outside of that...occasionally in a company setting, they'll do something that picks up their corporate colors, but in the school, college or municipal settings, they're not getting far beyond the greens and the blues."

Asked to account for the persistence of clay red and grass green in spite of evident issues with ball visibility, Vance has the simplest explanation of all. "I think those two colors look nice together," he says. "Also, it's only in the last couple of decades that people around the country have more insight into what is going on in the world. It takes a while for people's minds to open up."