When David Yamashita, planner for the parks and recreation department of Maui County, Hawaii, first moved to the island after working for 30 years in Portland, Ore., it was like stepping back in time in terms of what the parks department was doing in the area of master planning. After working in city planning for seven years, Yamashita was recruited by the parks and recreation department to help establish a parks-specific planning function within the local government — and that's when the fun began.

Maui County is set to enter the detailed design phase of a parks project that Yamashita has already been working on for a full year. The South Maui Community Park in Kihei is an extensive undertaking that will expand on existing recreation and athletics facilities, adding a regulation-sized adult baseball field, a multi-use/soccer field and a set of outdoor sport courts, in addition to a walking path, outdoor lighting, picnic areas, a community events area, an adventure playground and — importantly — a lot of additional parking.

Engaging the community and creating a master plan to me is just so important, because it gives legitimacy to the process, and you end up with a better product.

Community engagement program
According to Yamashita, one of the main benefits of master planning is that it provides a window in the timeline for gathering community input and support. Starting in November 2018, Maui County started reaching out to the local community by setting up a project advisory committee consisting of seven carefully vetted representatives — community members who were able to speak for soccer, baseball and a variety of other interests that would be affected by the project. "It's something that, when I worked in Portland, we used to do all the time," says Yamashita. "It was standard practice, but it wasn't being done here, so for Maui this was a big deal. People really liked it."

In addition to regular meetings with the committee, the parks department also hosted two open houses — interactive, two-and-a-half-hour segments where community members could drop by at any point to talk to the parks staff and members of the consultant team from R M Towill Corporation of Honolulu and peruse stations set up to address common questions regarding the project. These stations gave members the opportunity to engage, write comments and make their voices heard. Says Yamashita, "We'll have big pieces of paper on the wall with questions — so we'll say, 'What would you like to see,' or 'What should we know,' and it's really a lot of fun because we provide post-it notes so people can write their answers and have a hand in this conversation."

After the community was given the opportunity to review and critique three different concepts for the future park that grew out of advisory committee meetings, the parks department was able to narrow down the options to the plan that best suited its constituents. "It was great, because one of the purposes of doing that is, number one, you get ideas and input from people who really know the site better than we do because they live around there and they use the site — but the second thing is to empower people," says Yamashita. "I believe strongly that one of the purposes of the committee is to empower people, and at the end of the whole process, my hope is that they'll feel like they've had a positive experience working with government.

"There are still things that people are not going to agree with, but at least we've gone through the process and we can go back and say, 'Look, this is why that idea that maybe you had or somebody else had was not going to work, for these reasons.' I can also say, 'This was discussed at a committee meeting where we had representatives from as many interests as we could get,' so it's not like the county just made this unilateral decision." 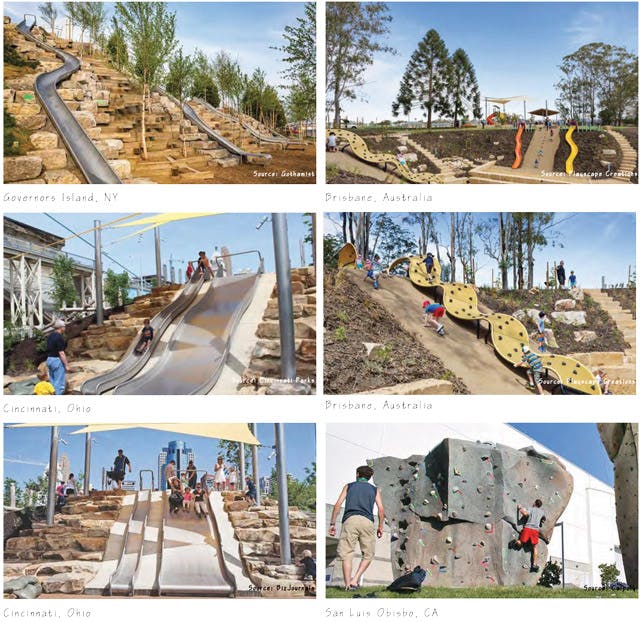 The Maui Department of Parks and Recreation presented the community with design precedents from parks around the world.

Site planning
Since Maui County has never before had a planner working specifically in the parks department, the precedent for even large construction projects was to just go out and do them. Yamashita's job is to set up a parks planning function so that when the county does capital improvement projects or larger initiatives, they exist within a larger context that makes it easier to think about long-term impact.

The next phase for the South Maui Community Park is to take the community's preferred concept and go into detailed design. This means getting into the nitty gritty as far as what is possible and what it will take to make it happen. The project site is already home to a gymnasium, a turf field and a baseball diamond as part of an original vision for the project that included a vast array of athletics facilities — a vision that Yamashita says was not really feasible. "When I first saw it, my impression was that this is what you get when you tell the consultant to forget about cost, forget about topography, and just put as much stuff as you can," he says. "It was over-designed and parking was just kind of crammed into these little extra spaces. It was just functionally not going to work."

The community park is being built on a sloping site of roughly 24 acres with rocky soil layered on top of what Yamashita calls "blue rock" — a dense, volcanic rock that is difficult to grade and expensive to dig into. "Cost is incredibly important," Yamashita says. "We want to minimize our interaction with the blue rock."

Why master plan?
The biggest value of a master plan, according to Yamashita, is that "it provides a vision and direction for what you should be doing — but it also tells you what you should not be doing. You work through different ideas and see what's possible." That knowledge can save vital time and resources when dealing with a difficult natural topography.

One of the biggest issues that the South Maui Community Park is dealing with is parking capacity and availability. According to Yamashita, even with just the current gym and two fields there is often conflict. "The permit staff can control demand through the permit process," he says. "For example, if there's a basketball tournament at the gym, they won't permit the baseball field or something like that. That's going to be a huge issue. Even though it looks like there's a lot of parking, we have to be really careful."

The master-planning process has also thrown some light on the issue of community usage. While the tradition on Maui has been to fill available space with as many sports facilities as possible, the new community park will attempt to cater to a broader audience by providing multi-use open spaces and other flex facilities. Says Yamashita, "It's an expression of the idea that not everybody wants to watch or play sports activities, but there are a lot of other things that people do in a park — and when you combine that with the needed athletics facilities, you get a much more functional park that's better for the whole community."

Finally, the planning process has opened an opportunity to think about collateral issues such as safety during low-usage hours. "We're thinking about park security and making sure that there are people in the park not just when there are athletics events, but at different times of the day," Yamashita says. "That's why the walking paths are important, as well as the playground and all these other things."

The South Maui Community Park has drawn widespread support from across the four islands that make up Maui County — due to the need for new facilities (there are no athletics facilities in the surrounding area and no adult regulation baseball or soccer fields in the district) and due to the popularity of the new planning system. Says Yamashita, "Engaging the community and creating a master plan to me is just so important, because it gives legitimacy to the process, and you end up with a better product. It's also a great way for people to engage in a positive experience with their local government."

This article originally appeared in the June 2019 issue of Athletic Business with the title "How master planning became key to South Maui Community Park." Athletic Business is a free magazine for professionals in the athletic, fitness and recreation industry. Click here to subscribe.