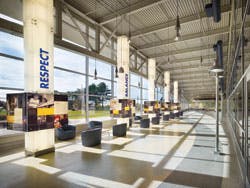 PILLARS The Mirenda Center for Sport, Spirituality and Character Development and institute director Ed Hastings (below) convey the merits of play, respect, reflection, balance and beauty.

Hired in mid-September 2008 as the third head coach the Neumann University men's hockey team had seen in as many years, Dominick Dawes had little more than three weeks on the Aston, Pa., campus to get acquainted with his players before sending them onto the ice. "The thing that impressed me most when I got here is they were all together, ready to go," Dawes says. "They had been together from the start of the year - working out as a group, doing things as a group. It was a core group of guys who had been through a lot."

But they were not yet a team. Late that season, on the heels of a 6-2 loss at Hobart College, the Neumann hockey players participated in an "evening of reflection," a yearly requirement for all teams sponsored by the Franciscan Catholic institution. "I'm not an overly spiritual person. I do believe God has a hand in everything, but that night of reflection was a tension release," recalls Matt Ward, a junior forward at the time. "We could just let go of everything that night, and it brought us closer as a group. Guys shared stories, found out things about other guys they probably didn't know, got emotionally worked up a bit. It's surprising, just sitting there in a quiet room with coaches and teammates not holding anything back. I think after that, everyone felt relieved. And God was definitely on our side."

Divine intervention or not, the Knights went on a nine-game winning streak that included victories over Hobart in the Eastern College Athletic Conference West championship game and the NCAA Division III tournament semifinals in Lake Placid, N.Y. The run culminated in a 4-1 win over Gustavus Adolphus and a national championship - Neumann's first in any sport. Says Ward, "People never thought we'd do what we did."

"I knew we had the ability," adds Dawes, who credits the night of reflection as "a huge step" in the team-building process. "The big thing was reaching a comfort level," he says. "Those guys would do anything for each other."

The night of reflection is just one facet of Neumann's unusual, if not unique, approach to athletics administration. The university is home to 19 sports programs and one institute that, in the words of athletic director Chuck Sack, has spent the past 11 years "looking at the connection between sport, spirituality of all religions and the development of one's character through those experiences." As of last October, the Institute for Sport, Spirituality and Character Development has a new home in the Mirenda Center - a $26 million, 72,000-square-foot facility that doubles as the university's competition basketball and volleyball venue, with nearly four times the seating capacity of NU's previous gymnasium. "We wanted this building to be more than a gym," says institute director Ed Hastings. "The institute existed before, but now we have the opportunity to express our mission through this building."

There's no missing the mission once visitors step inside the Mirenda Center for Sport, Spirituality and Character Development. Five illuminated pillars line the atrium - each with its own theme (play, respect, reflection, balance and beauty) and wrapped in quotations from scripture, saints and both modern-day and legendary sports figures. The "respect" pillar tells the story of Western Oregon senior softball player Sara Tucholsky's first career home run in a critical 2008 game - how she tore her ACL rounding first base, and how Central Washington University players carried Tucholsky the rest of the way. The "reflection" pillar, meanwhile, includes a photo of a girl gazing at a daisy, with a quote from the Buddha: "If we could see the miracle of a single flower clearly, our whole life would change." 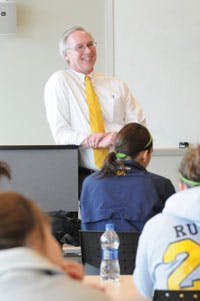 Hastings, too, is a pillar at Neumann. He teaches an undergraduate course titled "Sport and Spirituality" and a graduate course called "The Soul of Athletics," and co-hosts a weekly campus radio show. He has been tapped as a resource by several Division I universities, as well as the Vatican's Office of Church and Sport. A former Villanova basketball co-captain, Hastings has served as team chaplain for the Neumann men's team since 1999, the year the institute was founded. In fact, the institute assigns chaplains, including volunteer laypersons, to each of NU's teams. Joe Crowe, a former collegiate football lineman who maintains campus facilities, serves the men's ice hockey program, traveling with the team when he can and visiting the locker room with inspirational messages before games. "He just brings a different perspective, a different mentality to our team," Dawes says. "The biggest thing is he's someone else the guys can go to - to talk to and vent. He's an extra shoulder, and I think that's a big thing for them to have, instead of always having to deal with the coaches. He's been a huge part of our program."

Chaplains are present during evenings of reflection, which include dinner at the campus convent. "After dinner, there's usually an hour of reflective time," Hastings says. "We give them time to reflect on things like, 'Are there lessons that you've learned from sports? How have you experienced sports as being beautiful, like a beautiful pass or a beautiful play? Who are your mentors?' Maybe we have them talk about the good things that they've seen in one another."

In addition, the institute stages commissioning ceremonies at the start of each sports season to "reinforce to our student-athletes and coaches that we're commissioning them to be leaders on and off the field here," Sack says. "We're here to help them develop as leaders, as people in service to others." Moreover, team captains are groomed during an all-sports summit in the fall. "We discussed situational things, the sort of things that could pop up throughout the year, and we had to learn how to handle them in the proper way through suggestions from other captains," says Ward, a hockey co-captain this past season. "I found it really helpful. Being a captain, how you act reflects on a lot of people."

Ward's leadership was tested during a 15-9-3 campaign that included a seven-game unbeaten string before the Knights were eliminated in the second round of the 2010 ECAC playoffs. "We lost a lot of character guys - guys that had taught me and the other seniors what it takes," Ward says. "We didn't place any expectations on our season. We just tried to instill things that were taught to us - how every game matters - so that guys can carry that on as upperclassmen."

Of course, not everything in life is fresh-picked flowers and first-time national championships. As a freshman at St. Joseph's University, Sack was cut from the men's basketball team, a personal setback that nonetheless set the course for his future - team manager, Hawk mascot, graduate assistant, strength and conditioning coach, student-athlete academic advisor, Hawk Club fundraiser.

He was reminded of that experience during a March 21 open house in the Mirenda Center. The mother of a baseball prospect had seen the pillars and the inspirational storylines, then raised her hand and asked, "Do you have cuts?" Says Sack, "I read quickly between the lines: 'You're saying all these things, and you still cut people?' I said to her, 'Well, we do have to make cuts, because we don't really have anything in place right now as an alternative. We have considered club and JV teams.' But I can understand her question, I think, a little deeper, and I tried to explain to her what we do and what we try to do. And most days we do it okay, and there are days when we have to do better."

Fielding competitive teams is a constant goal for Sack - Neumann's 11 conference championships have come during his seven-year tenure as athletic director - but the Institute for Sport, Spirituality and Character Development strives for victories beyond the field of play. "Sometimes you get to that question of, 'Can you please everybody?' And sometimes the answer is, 'No, you can't,'" he says. "But maybe you can help people get a sense of who they are and where they are at this moment in their lives, to make them better, so that they might come back and join you in another way. Using my own story as an example, when one door closes, another door is going to open."