The 45,000-square-foot recreation center portion of the building will include a 30-foot-tall climbing wall, a 110-mile indoor track, a comprehensive fitness center and three multipurpose exercise rooms. A 5,755-square-foot concourse/gathering space will divide the recreation center from the 77,090-square-foot convocation center, which will serve as home to the Chanticleers' basketball and volleyball teams, and also as a venue for concerts and commencement ceremonies. Retractable seating in a three-court gymnasium will accommodate as many as 3,328 fans, while hospitality and president's suites overlooking the gym will accommodate an additional 165 people.

Other amenities include home and visiting teams' locker rooms and athletic department, recreation department and intramural department offices. A two-level campus bookstore will occupy 10,000 square feet of the center, which is scheduled to open in November 2011. . .

Construction began last month at Allen (Texas) High School for one of the most opulent prep athletics facilities in the United States, a $59.6 million football stadium . Designed by the Houston and Dallas offices of PBK, the facility will include 5,000 reserved seats, 2,700 general admission seats, 4,000 student seats, 5,300 visitors' seats and 1,000 band seats - for a total capacity of 18,000. A two-level press box features film and observation decks. Serving a student body of 3,900 in a fast-growing Dallas suburb, the stadium will also provide home and visitor locker rooms, a video scoreboard, four concessions stands, 12 restrooms, a wrestling room, a golf practice area and equipment storage spaces. Part of a voter-approved, $120 million bond package that will also fund the construction of a state-of-the-art performing arts center, the stadium is expected to be open for the Eagles' 2012 football season. 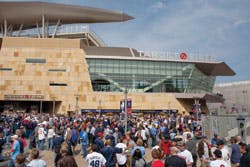 Three days after the Minnesota Twins' home opener against the Los Angeles Angels of Anaheim in April, the club got word from the U.S. Green Building Council that its new stadium, Target Field, had become the second MLB stadium, behind Nationals Park in Washington, D.C., to achieve LEED Silver certification. The club estimates that additional expenses related to obtaining the LEED designation amounted to less than 0.5 percent of the facility's $545 million cost. Replacing the Metrodome, the open-air stadium includes 19,000 lower-level seats, 13,000 upper-level seats, 7,000 club-level seats, 54 suites and a 40-foot-wide, 360-degree main concourse with open views to the field. To provide fans comfort during inclement weather, the stadium offers heated concessions areas, restrooms, restaurants and lounges on every level. One of the stadium's iconic elements, a roof canopy that extends beyond each foul pole and encases the field lighting, provides additional protection from the elements.