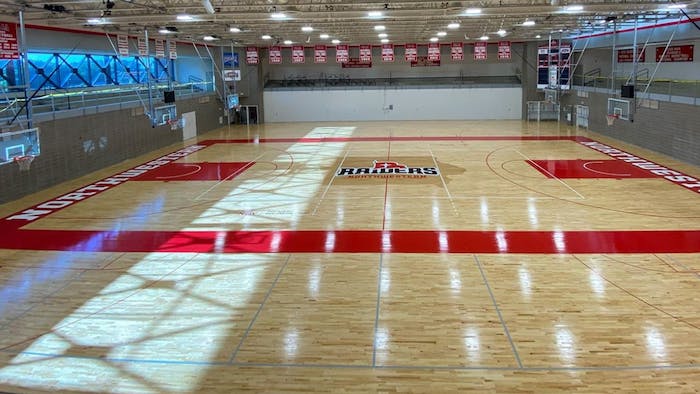 Northwestern College athletics announced last week the completion of a new gym floor inside the Bultman Center. The court in Orange City, Iowa, will be the new competition home for men's and women's basketball, volleyball and wrestling teams.

The addition of the new floor is part of the first phase in the planned Northwestern College athletics renovations. Phase I features the remodel of the Bultman Center, to cost $2.25 million. The project also includes brand new bleachers and lighting.

Due to a delay in receiving bleachers, the volleyball team will break-in the floor on Sept. 29 when Dakota Wesleyan comes to town.

Northwestern College's Bultman Center is undergoing a series of renovations. The facility, built in 1995, is home to four of Northwestern's standout athletic programs: men's and women's basketball, volleyball and wrestling.

The new floor has been named after John and Ann Den Hartog of Den Hartog Industries. — NWCraiders.com

A new recreation center that opened in Boaz, Ala., offers basketball courts, a walking track, indoor and outdoor pools and more.

The basketball gym and walking track are free for the community to use. ​​There is a fee to use the indoor and outdoor pools.

The Long Bridge Aquatics & Fitness Center, a modern swimming and training facility with more than 92,000 square feet, is now open in Virginia.

Long Bridge, home to Arlington County’s only 50-meter pool with one-, three- and five-meter diving towers and tiered spectator seating overlooking the pool, is the new go-to facility for competitive swimming and diving events, community lap swimming, aquatics and fitness classes and other activities.

In addition to the aquatic elements, Long Bridge features an 8,000-square-foot fitness center with an open area for cardio and weights, group exercise rooms and two wet classrooms. Multipurpose community rooms are available for classes and community events.

Design and build services for the center and park expansion were provided by Coakley & Williams Construction Inc. Coakley’s design is simple and efficient.

The floorplan’s efficient layout minimizes circulation and maximizes program space. There is a generous deck surrounding the 50-meter pool, up to 18 feet on three sides and 24 feet on the fourth. This space was one of the most critical items identified by the swim community throughout the process.

Other key aspects met by the design include a simple control desk, thoughtful separation between “wet” and “dry” users of the facility, and the ability to hold an event in the 50-meter pool while keeping the leisure pool open to the public.

With beautiful views of Washington, D.C., plentiful outdoor space and walks along the esplanade, Long Bridge Park is near I-395 along the Potomac River. The park features three full-size athletic fields, including the home field for Marymount University’s lacrosse and soccer teams and a misting playground. — Arlington County Government

The project was made possible by a donation of $25,000 from Healthy Blue to the David Raines Community Health Center. The donation will fund the addition of a softball field to the Linwood Public Charter School’s campus, with potential growth for future projects.

The Linwood Fitness Field will promote health and wellness outside of the classroom for more than 1,000 students. — Bossier Press