A $17.3 million project at Penn State DuBois in University Park, Pa., will transform the Physical Fitness, Athletics and Wellness -- or PAW -- Center on campus into a state-of-the-art facility with a focus on athletics, health and recreation.

The gymnasium and fitness center will be updated and additional practice space as well as offices for athletics staff also will be housed within the updated building. New heating and air conditioning systems will be installed for improved efficiencies.

The physical therapy assistant and the wildlife technology academic programs will be relocated to the Smeal Building, which will also receive renovations to accommodate the program moves.

Ten percent of the project has been funded by philanthropic giving and an additional 6% of funds will come from a student fee.

The renovation and addition to the Physical Fitness, Athletics and Wellness (PAW) Center at Penn State DuBois received final approval from the Penn State Board of Trustees today (July 15). pic.twitter.com/hrGBJuo9Ck

Eleven acres of land will also be added. The project will finish out the ARC complex, and it will be the largest rec project since the facility opened in 2006.

The city will also add an open-air pavilion and area for picnic tables. There will also be bleachers with nearly 500 seats.

The City of Anderson said it expects to start construction in mid-August, and it could take at least 10 months to complete.

Officials said special obligation bonds will be used for the project, and the payments will be paid back through hospitality fees from dining in the city. – WSPA-TV

The arena will have a “whole new look” by the start of the coming basketball season. The goal is to transition into a more “modern” facility inside and out, including new blue seats, a new floor, new suites and a new concourse.

The university also introduced two other multimillion dollar projects. The south lobby will be re-purposed into a new sports medicine complex and a new locker room and lounge for the players. The southwest corner of the arena will feature a new athletic center named after Mike Carter, ORU’s former athletic director.

The project is estimated to cost around $25 million.

The Mabee Center is scheduled to be completed by November. The other facilities will be completed between October and December of next year. – kjrh.com

Construction is underway on ORU’s new Welcome Center, the 1st in a number of new buildings to come, including a new Library, Media-Arts Center, and Athletics Center. pic.twitter.com/3Grvi1jh2P

Construction on an $8 million park aquatic facility project in Amarillo, Texas, is ending, and after multiple delays, the facility is expected to open this month.

Along the way, the project faced delays related to weather and “unforeseen material issues,” the city said. Crews lost 42 construction days, including Saturdays, because of weather.

State and federal grants helped fund the project; $1,264,924 was received from the Federal Transit Administration and $518,225 came from the Texas Department of Transportation. – Amarillo.com, Amarillo.gov 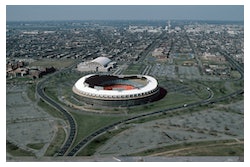 A new report suggests the NFL's Cleveland Browns are actively exploring sites for a new stadium, with the NFL leaning toward building a new stadium versus renovating the existing FirstEnergy Stadium.
June 20, 2022
Page 1 of 157
Next Page
AB Show 2022 in Orlando
AB Show is a solution-focused event for athletics, fitness, recreation and military professionals.
Learn More
Buyer's Guide
Information on more than 3,000 companies, sorted by category. Listings are updated daily.
Learn More