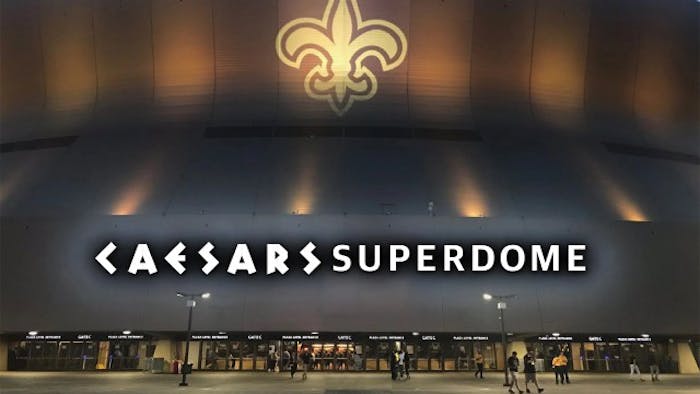 The home of the New Orleans Saints has a new name.

The New Orleans Saints and Caesars Entertainment announced Monday the formation of a 20-year, exclusive naming-rights partnership that rebrands New Orleans' iconic downtown stadium as the Caesars Superdome, according to a joint statement.

"We understand that the Caesars Superdome is more than an iconic venue, it's the symbol of a resilient and innovative community," Tom Reeg, CEO of Caesars Entertainment, said in a news release. "We've had a strong relationship with the New Orleans Saints for nearly two decades and we are thrilled with the opportunity to strengthen it and celebrate our commitment to the city, the state, and the entire Gulf Coast region."

"The Superdome contributes close to $600 million in annual economic impact to the state of Louisiana, and Caesars is the largest gaming company in America,” president & CEO of Greater New Orleans Inc. Michael Hecht said. “Together, they will ensure that our iconic stadium drives even more jobs, tax revenue, and global brand awareness for New Orleans and Louisiana. The fact that the Caesars Superdome is so integral to the culture of New Orleans, and that Caesars is well-known as a community-oriented company, makes this partnership that much more compelling and promising for our collective future."

The Caesars Superdome, in a partnership between the Saints, the State of Louisiana and the Superdome Commission, is currently undergoing a $450 million renovation.

The facility has seen over $350 million in improvements in the last 12 years. The most recent project will enhance the quality of experience for the spectator at all levels, with the addition of field level suites, improved concessions and vertical spaces which improve the environment and amenities and ingress and egress, as well as operational upgrades crucial to event operation. The renovation, expected to be completed by Super Bowl LIX, will help the Caesars Superdome retain its place in the pantheon of sporting facilities, having hosted seven Super Bowls (the most of any facility, the Saints said). Most recently, Super Bowl XLVII in February 2013, which propelled $480 million in spending in New Orleans and $262.8 million in direct spending by visitors.

The last Super Bowl played in New Orleans also helped inspire an estimated $1.2 billion in public and private improvements to the city.