By now the images of terror and destruction, so familiar that they replay daily in the minds of many, have lost a little of their power to shock and awe. Americans - unexpected witnesses to a yearlong salvage operation in lower Manhattan, a crippled economy nationwide and the prospect of a war that promises no tidy resolution - have begun to steel themselves for a future very different from the one they might have imagined on Sept. 10. 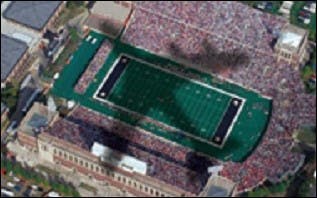 Several commentators, even in our first days of national anguish, suggested a possible silver lining in the billowing clouds of black smoke: that the country's political and industrial leaders would suddenly awake from their collective torpor and tighten our security net. Indeed, within hours of the attack meetings were being held around the country by virtually every group responsible for the safety of large numbers of individuals, whether public transportation agencies or event management companies. On the agenda: reviews of all existing security procedures in light of an attack that was as simple in execution as it was complicated to plan - and that no one, not even CIA operatives who'd read Tom Clancy's "Debt of Honor" or Thomas Harris' "Black Sunday" on their family vacations, had anticipated.

Which is what made the sports world's first stabs at security in this brave new world so disheartening. Following the Federal Aviation Administration's lead, the nation's professional sports leagues (which had been warned by counterterrorism experts that their events made for inviting targets because of the large number of potential casualties) began a highly publicized crackdown on carry-ins, prohibiting coolers, backpacks and large bags and making all other bags subject to search. In addition, more uniformed police were hired to stand guard outside stadiums (some employing bomb-sniffing dogs), players and reporters were required to show identification before entering their places of work, and cars were restricted from parking within 100 feet of ballparks.

News that most of these procedures were only sporadically enforced was only part of the problem - the other part being that virtually all of the procedures spoke to the types of terrorist acts we could have anticipated before the World Trade Center and Pentagon attacks. One can almost see the veins popping out in Bud Selig's neck as he responds that Major League Baseball simply cannot prepare against every potential threat, especially not the one posed by a commandeered commercial jet. In a way, it brings to mind the critic of the so-called missile shield who labeled it "a weapon that won't work against a threat that doesn't exist." In their choice of weapons, the hijackers added to the country's sense of anxiety by demonstrating that the most commonplace of tools could be used to devastating effect. In their choice of targets, the hijackers were figuratively striking a blow against American arrogance and stability, while more literally trying to take down its financial system. If their objective had been to inflict the largest number of casualties, they might have chosen any old game at 107,501-seat Michigan Stadium. They didn't.

Or at least, they haven't yet. That disquieting thought is what led several NCAA Division I-A athletic directors (including Michigan's Bill Martin) to call on the FAA to declare the air space around stadiums no-fly zones during the first games after the attack. (The FAA eventually declared no-fly zones over all "major" events.) It's also what led the U.S. Olympic Committee to conduct an urgent review of its security plan for the 2002 Winter Olympics. As it happened, Mitt Romney, president of the Salt Lake Organizing Committee, was in Washington at the time of the hijackings to meet with various governmental agencies about their coordinated security plans for the Games. After Romney and his staff were evacuated to Virginia, he shakily told reporters with regard to Salt Lake security, "The conduct of public safety in this country can never be the same. I thought the program was a complete and holistic plan, which did not have gaping holes or obvious weaknesses. I think that characterization has to be completely re-evaluated in light of this tragedy."

But just days later, the USOC declared that its procedures were adequate. Congress pledged an additional $12.7 million for Olympic security (the feds had already budgeted $200 million and the SLOC and state of Utah $70 million), while IOC director general Francois Carrard expressed confidence in Salt Lake City's "very robust" security plans. "It's one thing, if you're the security agencies, if you don't know which continent is the target, what type of facility is the target, when it will occur or from what source it might occur. It's very different if you know the 17 days and the place that must be secured," Romney said.

Left unstated was a rather salient and unnerving fact - that the incident in which one spectator was killed and 111 were injured at the 1996 Atlanta Games was not the worst-case scenario (an airplane crashing into the opening ceremonies) but the result of a bomb left in a small backpack in Centennial Olympic Park. Strap those explosives inside the down parka of a suicide bomber, and you've got a situation that is virtually impossible to prevent - as residents of the Gaza Strip know all too well.

It seems inevitable, then, that the tangible effect of the attacks will be the kind of technological advancements that allowed humans to achieve intercontinental flight in the first place. Aviation experts are envisioning on-board systems that take evasive action automatically when planes are pointed at buildings, while a variety of biometrics companies (which make fingerprint, retina, facial and voice scanners) saw their stocks soar following the attacks as the rest of Wall Street slumped. Stadium owners and civil libertarians may now be more accepting of the surveillance cameras that allowed federal agents to scan for suspected terrorists and others with criminal backgrounds at Super Bowl XXXV in Tampa.

Many other changes will be up to stadium owners to put into place themselves, at their own expense, beginning with the hiring of more-experienced security personnel who can recognize more readily the types of weapons (even well-camouflaged ones) that might be used by a sophisticated terrorist. Metal detectors might have to become as common as turnstiles, if only to help soothe the fears of people who come to games. Before Sept. 11, people spoke of an "arms race" as universities competed to build the largest or most state-of-the-art facilities to attract ever-greater numbers of paying customers. Now, if they want to get fans to leave the safety of their living rooms, they'll also have to assure their fans that these buildings are the safest they can be. And cross their fingers.