Ballpark orientation is not just about keeping batters, catchers and umpires from squinting. 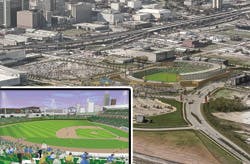 HOK Sport, the Kansas City-based sports architecture firm, has some prior experience, you might say, designing ballparks. So it was a bit of a surprise when the firm's preliminary drawings for a new downtown stadium in Omaha, Neb., were reported in the Omaha World-Herald as showing the future home of the College World Series "facing in the wrong direction."

Although the World-Herald story focused largely on the difference between the new park and Omaha's beloved Rosenblatt Stadium, "Ballpark Takes New Direction" went on to suggest that ballparks can face "almost any direction but west." But Martin DiNitto, an associate principal with HOK Sport, notes that the three site plans presented to the NCAA by designers in February showed a relatively narrow range of southeast, east and northeast orientations. While the southeast orientation - the direction that the catcher faces - represents a 90-degree turn from the traditional northeast orientation (which Rosenblatt has), DiNitto says that left-handed pitchers will nearly always be accurately described as southpaws on baseball diamonds throughout the northern hemisphere.

"A northeast orientation of home to center field points the third-base line due north, while a southeast orientation points the first-base line due south. You typically have the ability to rotate it within those parameters," DiNitto says. "There's a fourth position that has worked in several ballparks that have the catcher facing due north. If you think about it, at midseason - June 22, remember, is the summer solstice - you can stand at the right field foul pole and the sun will align with the left field foul pole. That's not a very comfortable situation for spectators sitting on the first-base side, because they'll be looking into the sun pretty much the entire game."

Computer modeling the path of the sun in 10-minute increments throughout the season is standard procedure for stadium architects; recent improvements to such programs allow the ability to throw shade across the field as the sun goes behind the stadium deck. But site orientation isn't just about keeping batters, catchers and umpires from squinting. These days, views into and out of stadiums toward downtown skylines, rivers and bridges are a huge part of their appeal, and the comfort of spectators in the stadium or watching from their living room couch is considered nearly as important as the safety of ballplayers.

DiNitto says it's fortunate that the Omaha site is ample enough to allow for flexibility. "It still works for all three positions at this point," he says. "One of them accommodates views of as much of the river, convention center and city skyline as possible within the constraints of orientation. We'll want to sit down in the later design phases with the various stakeholders and discuss with them at length what their preference would be, taking into consideration the sun angles for ballplayers on the field and fans in the stands. When it's all said and done, we won't have changed the traditions in baseball."