At the Seattle Mariners' ballpark, conservation is king. 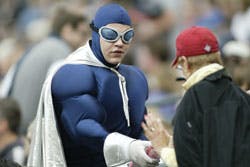 Seattle's Safeco Field is illuminated most days and all nights the Mariners are playing at home by 560 2,000-watt lights. Considering the value of each bulb, the energy it consumes over its three-season life span and all the maintenance labor involved, it costs the Mariners roughly $250 to power the lights for one hour. For a typical three-hour game preceded by two hours of batting practice, the bill comes to $1,250 - or potentially $101,250 total over the course of an 81-game home schedule.

Vice president of ballpark operations Scott Jenkins tries to keep the lights off during BP whenever possible, or when a day game allows, providing the television production and MLB umpiring crews acquiesce. But Jenkins and the Mariners have even bigger conservation fish to fry.

"If, when a game's over, you turn the sports lights off and leave the building and don't pay attention to everything that's on or open or could be set back, you're missing a tremendous opportunity to save money," says Jenkins, who came to Seattle midway through the 2006 season and immediately began poring over Safeco's monthly energy use and expense history. "My goal was to find the low watermark and keep it at that low watermark, and if we got smart and got everybody engaged, maybe we could set a new low watermark. And if we did that, I thought we could save $100,000."

These are numbers not lost on those paying the bills. "If you start talking like a tree-hugger, a lot of people's eyes kind of glaze over, but if you start talking about bottom-line numbers, everyone pays attention," Jenkins says. "The big focus has been on quantifying the reduction in use and the subsequent savings. It really pays from a business standpoint."

This explains Jenkins' mantra for those in the trenches: "Do at work what you do at home, where you're paying the bill." Safeco Field concessions stands contain checklists holding workers accountable for turning off lights and equipment. Captain Plastic, the Mariners' recycling mascot, asks employees to "Join the Green Team" on posters hanging in Safeco's service tunnel, where bullet points outline the organization's goals of reducing natural gas use by 60 percent, reducing electrical use by 30 percent and recycling as much as 80 percent of the ballpark's waste stream.

On the latter front, the Mariners have cracked the 80 percent mark on occasion, but spent the bulk of the 2010 season pulling up a season average in the 70s. Still, that's nearly double what the team was accomplishing as recently as last year. A switch to compostable cups, utensils and trays, implemented ahead of the city of Seattle's July 1 mandate for all food-service businesses utilizing disposable service ware, has made all the difference. 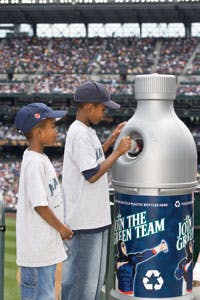 CLEAN-UP SLOT It's hard for fans to miss the recycling containers at Safeco Field.

"In a typical year, Safeco generates 1,200 tons of waste," says Jenkins, who upon closer inspection found that a single game produced roughly equal parts plastic, compostable waste and non-compostable waste. "At that point I'm thinking, if we can manage our supply chain for concessions, we can make this all compostable, except for a small percentage."

Because of the city's mandate - as well as success stories from the Mariners, Seahawks, Sounders and other regional sports entities comprising the best-practices-sharing Green Sports Alliance - the supply chain is growing. Says Stephen Banchero, general manager of commercial collection for Cedar Grove Recycling, the Mariners' composting partner, "We have well over 1,500 restaurant clients out there looking to go to compostable packaging. Obviously, the demand has gone up, and we're starting to see more competition in the marketplace, which is starting to drive the price down."

A compostable beer cup will break down in roughly 90 days, according to Banchero. Conversely, a plastic beer cup in a landfill may never break down. So what's the big deal? According to the company's website, for each ton of organic waste composted at Cedar Grove, 0.93 metric tons of greenhouse gas emissions are prevented. Cedar Grove processes more than a million pounds of recoverable organics daily, or the annual amount of greenhouse gas emissions produced by 40,000 American households or 54,000 American drivers. Moreover, Cedar Grove returns composted material to Safeco Field in the form of flowerbed-nourishing soil.

"Stadiums are Seattle's most public places," says Banchero, who also handles composting for the Seahawks and the University of Washington football program. "It's one thing to have buy-in from a restaurant or a business, but when you have the biggest sports venues in the greater Seattle area wanting to combine efforts, find the right products and divert more, it's really exciting."

Still, the fan education process can be slow. The Mariners show a scoreboard video outlining their sustainability efforts, and concessions stand signage pictures compostable items, but Jenkins still catches fans hesitant to toss their cups into containers marked "Food and Compostables." "I say, 'Go ahead. It's made out of corn,' " Jenkins says. "Very few people come here with their recycling hat on. They're here to have a good time. But sports holds a tremendous amount of power in communicating to the public, and we're going to try to leverage that to get people to act and think a little more green. We've got to make it easy for them by saying, 'Last year's garbage is this year's compost.'"

The ongoing sustainability education of stadium operators got a boost in April when Major League Baseball announced the development of a comprehensive software system designed to collect and analyze environmental data related to the stadium operations of all 30 clubs. According to Allen Hershkowitz, senior scientist at the National Resources Defense Council, it is "arguably the most important environmental initiative in the history of professional sports, worldwide." Adds Jenkins, "We have a tool now to get everybody in the game."

Other pro leagues are expected to follow MLB's lead. Jenkins sees even deeper roots for the Green Sports Alliance, which he expects will gain 501(c)(3) status and expand to the high school and even the youth activity levels. "When you think about the excitement and passion surrounding sports in this country - how many people are involved, the vehicle miles traveled and the food and drinks that are bought - if we can link that to sustainable thinking and get people to behave in a way that values the earth and its resources, we can have a substantial impact."